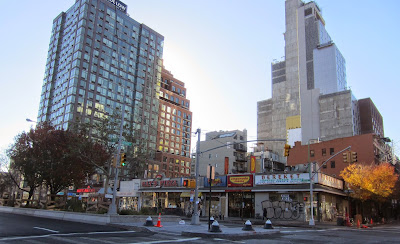 News broke Friday about the new retail-residential complex coming to the one-level strip on East Houston between Orchard and Ludlow: a 10-floor building with 83 residential units.

In addition, the new building will feature 13,500 square feet of ground-floor retail and nearly 5,000 square feet of community facility space, according to New York Yimby, who first reported on Ben Shaoul's plans now on file with the city.

The address for this Shaoulville will be 196 Orchard St.

As BoweryBoogie (who first learned that Shaoul was behind this project) has been reporting, the businesses along here (Bereket among them) have closed or moved to make way for the development. Pretty much everything you see will be gone — except for Katz's, whose co-owner sold their air rights to Shaoul.

Ismael Leyva is the architect of record.
Posted by Grieve at 5:00 AM

We avoid Orchard Street like the plague now. The people walking up and down the east side of the street now are just so...

I've never been so creeped out by seeing so many rich people acting like they fucking own the place. Unfortunately they DO (which is the disgusting truth).

The Lower East Side is dead.

right. ok. can't wait to see what that means.

maybe he wants to restore some of the Cabrini beds

Yeah, I also am curious to see what they mean by "community facility" space; to Gregg Singer, who bought CHARAS, it meant a youth hostel, and then a dorm—neither of which are really "for" the community.

It will be interesting to see if by "community facility" they mean a boxing gym, or maybe a nail salon. After all, both help build community, don't they?