Uh-oh: SantaCon looking for another neighborhood for its participants to trash 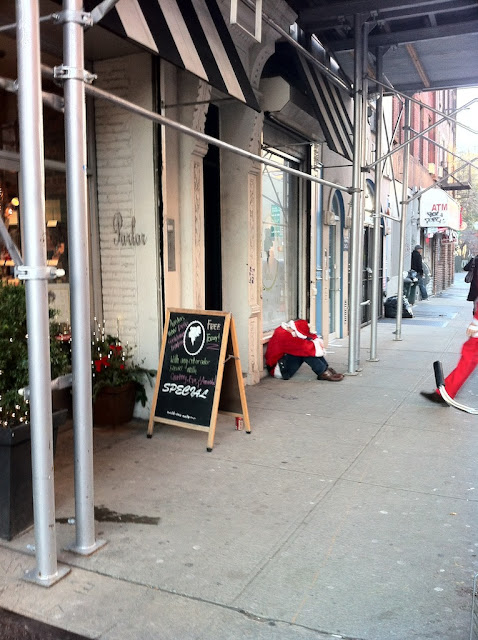 Organizers for SantaCon will continue searching for a neighborhood for the booze-fueled charity bar crawl, deciding to stay out of Bushwick, according to an organizer.

Few people in Bushwick were rolling out the welcome mat. As Gawker put it in a headline: "Bushwick Bars to Boycott Drunken Disgusting Shitshow Known as SantaCon."

“Nobody wants it and nobody will allow it,” Ben Warren, owner of The Bodega and Heavy Woods, told amNewYork. “I'm just going to keep them out.”

Warren said he got firsthand experience of “the madness that ensues” during SantaCon while living in the East Village. Now as a bar owner, Warren said he would hire a few door people to keep Santas out of his bars.

Bushwick denizens were also worried about the whirlwind of hard-drinking Santas coming into their neighborhood in the name of charity.

“It's like basically coming to trash the neighborhood,” Matthew Christie, a 23 year-old Bushwick resident, said.

The East Village/Lower East Side served as HQ for the drunken disgusting shitshow last year. Suggestions for 2014?

'Quite simply, SantaCon is a parasite' (48 comments)
Posted by Grieve at 4:59 AM

Email ThisBlogThis!Share to TwitterShare to FacebookShare to Pinterest
Labels: SantaCon 2014

Congrats to the businesses of Bushwick for standing up to this shit. Makes you wonder why the businesses in the East Vilage didn't do the same on previous years.

1) So Santacon was never really officially headquartered in Bushwick for this year's pukefest, they basically put out feelers to Bushwick bars and the bars said fuck no and now the Santas are "considering" other neighborhoods. I suspect that they are simply performing shenanigans to throw detractors off the trail and after doing an 11th-hour email blast to participants will just come back to the EV in the end, business as usual.

2) Why don't any of these reporters from AMNY, DNAInfo, the NYP, or Daily News ever show any interest in who the fuck organizes these shitshows? We all KNOW they are shitshows and don't need another tedious article about vomiting and where they are not wanted—we need "Who Is Santacon?" So either these reporters know who the organizers are and aren't divulging for some reason, which would be irresponsible, or they don't seem interesting in finding out, which makes them pretty sad journalists. We don't need another 1,000 articles that tell us what Santacon is and about their terrible outfits and sad little soup can drives and falling down in the streets. WE KNOW

Hey, where does Bloomberg live?

Doesn't the organizer of SantaCon live in Darien? I nominate the Tokeneke neighborhood. They can set up a street fair made of bars under party tents.


I have a suggestion on how to finally end the SantaCon madness:

1) Bring SantaCon back to the East Village. In fact, insist they come back here.

2) Set up a fake bar inside the former Yaffa Cafe space that will act as the official SantaCon starting point. We will call it The Last Step.

3) Maximize attendance by promising everyone who comes by a free beer.

4) Slip the same roofies that Bill Cosby allegedly gave his "dates" into each cup of beer.

5) Funnel drunk Santas in the front door and out to the back yard where our Winter Wonderland Experience awaits.

6) Just before they start to lose consciousness, direct the drunk Santas into the entrance of "Santa's Worksop" which is actually a giant wood chipper. Everyone will ignore the screams since it's SantaCon and people are screaming already anyway

7) Sell the meat scraps to local non-vegan restaurants to get rid of the evidence.

I've done some research on trying to unmask these jerks. The most I could find was their website was on a small server with dating services, one located in Flatiron.

Ive lived in the East Village 30 years, so has my husband. We've dealt with so many larger issues than Santa Con. As a bar owner in the EV I must say never have we had issues with Santa Con. Its similar to St Patricks day. If someone acts like a fool or causes trouble they get thrown out like another day or night. I find summers nights on Ave A on regular saturday night far worse then santa con. Your welcome at Manitobas! Just don't piss on my floor!

Giovanni, no one will hear the screams because we'll be applauding too loudly.

Who are we kidding. The EV is the perfect neighborhood for this event, you know it, I know it, the organizers know it. What is with all this feigning indecision.

Anony 7.45 AM nails it. Who the fuck are these people? You think any other organization having such a major impact on parks, streets, neighborhoods, especially a political one, would be allowed to hide as “anonymous”? Lends major credence to the rumor that the organizers are current /retired NYPD who have major bar interests. As usual, there is some kind of corrupt government big time fix going down. The media is pathetic. And sorry, this shitride is St. Patrick’s to the 20th power at least.

why not murray hill or fuckin' hoboken for that matter? they're both practically santacon 52 weekends a year.

“It's like basically coming to trash the neighborhood,” Matthew Christie, a 23 year-old Bushwick resident, said.

...and that's when you made your problem our problem. Thanks for nothin'. And ya wonder why the rest of us hate this thing, as well as the bars who escalate the problems, but we're all glad that its never an issue for You.

Send 'em to the bottom of the Mindanao Deep. They won't bother anyone there. Ever again!

@9:27 AM
If you own are bar in the EV than you can control what happens inside and possibly just in front of it you cannot control the drunken mobs which fill the sidewalks and literally streets of the rest of the neighborhood. St Pats day crowds don't come close to the Santa-con thousands. St Pats drunks visit Irish named bars not every damn bar they find. The residue left over from SC is ten fold from those green hats and scarves left by the "Irish for a day" drunks. Everyone is young once most of us are stupid at that age and at the very least this event has the potential to harm the participants on a large scale than any public gathering that goes down in the city. Fights, falls and sexual harassment spike during the Santa Con event. Another reason to stop it for good.

Hey! I've got some tinsel for the chipper!

@Giovanni - excellent suggestion (and well written!). No screams will be heard due to the applause is correct.

Send the fucktards back to the colleges they came from since they're trying to keep that pathetic part of their life going as long as their livers will hold out. GROW UP and SHOW RESPECT - and they may MAY be tolerated for a day. But they know nothing of these things... Pathetic to the Nth degree.

Love the commenter who suggested New Jersey. Let them throw some money into Newark's economy, save themselves 15 minutes on the PATH, and stay far far away from here.

What about Atlantic City? A little far I know. However, that economy could use all the $$$$$ it can get

If the NYPD thought Santacon was going to be "infiltrated" by (a) terrorists or (b) Occupy Wall Street protestors, you know damn well that riot police would be out in force to shut it all down.

You can't very well tell people they can't dress as Santa. And you can't tell them they can't drink, if they're of legal age. So what exactly is there to stop?

@8:38pm: And equally, any bar owner can say "no one wearing red will be admitted today." Private businesses CAN stop catering to this "event" and some restaurants have previously enforced a policy of "No Santas Allowed."

You ask: "What is there to stop?" Oh, just a few thousand people who think our neighborhood is a frat-house vomitorium. I resent people being able to (literally) dump on where I live just because they decide it's "fun."

The "charity" part is, of course, a complete lie - I'm sure any actual investigation into where the $$ goes would show Santacon to be exactly the "con" it is. Remove the fictitious "charity" claim from this booze-a-thon and there's absolutely nothing to recommend it (unless you're a bar owner - which brings us back to the question of who's really behind this).

What's to stop is thousands of bros decending on one neighborhood with their identities concealed vomiting/urinating/shitting on the streets, destroying property, getting handjobs in Duane Reade, etc. Grow the fuck up already.

I'm assuming they will return to the EV & the LES. Too many bar owners here and too many bars who want this crowd (The 13th Step, etc.)

Actually an ideal place is Coney Island. SantaCon would fit in perfectly with the carney atmosphere, and would be a boast to local businesses, and all the puke could be washed out with the tide. Really, seriously, the best option, since Coney Island could use a winter fest that rivals the Mermaid Parade.

@9:36am: You are completely right that Coney Island would be the perfect place, but good luck with that - these people can't find their way out of a paper bag, much less to/from Coney Island.

Be advised that Coney Island in the winter is a shut-down ghost town, not to mention absolutely freezing if the wind is up. Even if they opened the few bars there, which are seasonally shut and pipes-drained to get thru the winter freezes, there is no staff to run them.
I grew up there and love the place in winter, but these fucking Santa kids could not possibly abide a winter party there.

Rikers Island. Ferries and shuttle buses. Whatever it takes. One way. Of course.

As a Bushwick resident of 24 years I won't have these frat-tards coming thru, and will be happily waiting on my roof and will be throwing rocks at any groups of Santas I see. I encourage others to do the same. Expect to read about it the next day.