Report: SantaCon isn't coming to this part of town in 2014 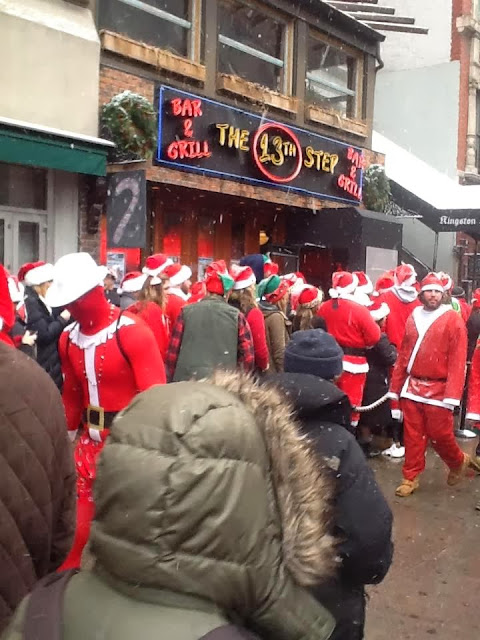 SantaCon, the annual charity event beloved by all save for a few curmudgeons who don't like to have fun, is apparently bypassing the East Village/Lower East Side this year.

So far, it looks like bar owners there are psyched, as they should be.

“I’ve worked on SantaCon while bartending in the East Village. It’s the absolute worst thing ever. Worse than Saint Patrick’s Day! I literally can’t believe it’s coming to Bushwick!” he continued. “I can’t think of anyone that would let drunk vomiting Santas into their bars in this hood. I’m guessing they will be aimlessly walking around.”

As you know, most of the Santa-clad revelers are on their best behavior… of course there are always one or two bad apples as you'd expect in any crowd. (Good God! That Armory Show last year!)

Per Jessica Roy at Daily Intelligencer:

East Village bars, which have long fought to ban the daytime bar crawl and will be spared this year's vomit puddles, must have made Santa's Nice List this year.

There is no way drunk Santas won't be wandering around this neighborhood that day; but still thankful if we've dodged the "official" part of the event.

"Each participant of SantaCon is officially required to pay $10 to participate which SantaCon donates to charity in hopes of feeling better about their holiday boozing."

My ASS all of these binge drinking low-lifes are paying $10 to ANY charity. Move back to Philly or Buffalo or wherever bored alcoholics conceal their identities, roam in packs and terrorize people. Perhaps the South!

When Anonymous is through with the KKK I wish they'd move on to the Santacon organizers. Who are these people?!?

That is hilarious. Bushwick has definitely jumped the shark of hipness if that's where all the bros are headed this year.

I agree that we're not rid of these people just because their new official base is Bushwick. They're lazy moos and will just do what they did the last 5 years.

I'm so with you, 7:08. The anonymity of the organizers (and the way that none of the powers-that-be seem interested in exposing them) is very suspicious. Last year it was posited in the comments several times that the organizers are cops. That's why they can run around shouting, falling down, vomitiing, with open containers, but no one gets arrested.

Now this is hilarious: The SantaCON organizers are promising to be even more responsible so as not to piss off the entire neighborhood:

"This year, Santa is working even more closely with local community leaders and organizations to ensure that the event remains enjoyable for locals and Santas alike," organizers wrote in a FAQ for bar owners.

According to DNA info the organizers haven't even talked to the community board OR to the 83rd precinct:

But an associate at Community Board 4 said district manager Nadine Whitted had not heard from organizers and did not yet have comment. An executive officer at the 83rd precinct also had not yet heard of the crawl coming to the neighborhood.

Way to go, SantaCON, and so the annual con job begins once again. Bushwick meets VomitTown and is officially no longer cool anymore.

The EV will still have plenty of them. There's nothing like living in "Sty" Town these days and see them all streaming out of our glorified dorm shithole at around 11 AM on their way to the usual suspect places. BTW, Bros/OMGs and Hipsters CAN interbreed; it is not a pretty sight.

Wait, the bars here fought against having the daytime pub crawl here? I thought they were the ones who wanted it.. good for business etc???

@8:41 AM Ditto. Couldn't have said it better had I typed it in Mandarin with my eyes closed. Looks like someone is already pre-gaming for the big VomitTown Convention.

Wow, Bushwick will have a Subway and Starbucks even quicker than Bedford Ave in Williamsburg. The transformation is more and more rapid.

I don't usually subscribe to conspiracy theories but rumor that members of the police force are behind this vial display of social disorder to help some supposed charity could be true. We have a new mayor and police commissioner this year let's see if any arrest are made or violations handed out. We need to limit the amount of bars in the EV especially bro and sports bars. The really bring nothing to the neighborhood but noise, trash and a lower quality of life for just about everyone that live here.

Let's move Santacon (which really is a total "con job") to someplace like Morristown or Princeton, NJ - or out to the furthest reaches of Queens or the Bronx - where I'm sure this "charitable" event and its participants will be more fully appreciated (and perhaps dealt with appropriately).

How about neighborhood roadblocks at 4th, 3rd, 2nd, and 1st Avenues, where, if you have any kind of Santa-ish apparel (or are in a group larger than 4) you have to pay $20 for disrupting the community?

PS: As to the anonymous organizers of this fiasco, how many bar owners are former police officers? That would be interesting to know.

Hooray! This is the best fucking news I've heard all day; Christ, make that the entire week. :)