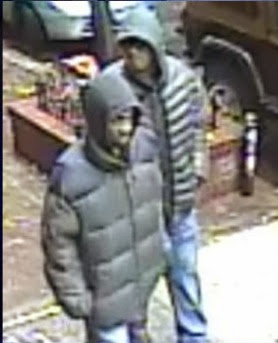 The woman resisted the suspects, who in turn sprayed her in the face with an unknown substance, police said. The suspects then took the knapsack and cash.

There isn't much descriptive information about the male suspects, both described as between 20 and 30 years old with close-cut beards and about 6 feet tall.

Anyone with information that could help in the investigation is asked to call Crime Stoppers at 1-800-577-TIPS (8477). You may also submit tips online.
Posted by Grieve at 7:42 AM

And she had $2K in a backpack why?

7:49AM, I was wondering the same thing of course. Maybe they knew she would have that much cash with her so they struck at the opportune time?

Anyway, it doesn't matter. A young lady was attacked and robbed and I hope they catch these thugs.

2K really isn't that much money, we've been conditioned to believe carrying cash is wrong. 2K won't even buy 2 ounces of gold. It does seem like they knew she had the cash.

She should be able to carry whatever amount of money she wants in her backpack without having to worry about being robbed by scumbags like this. I hope they are caught soon.

@Anon. 7:49 - why she had that money is no one's business. Maybe she took it out to get ready for Black Friday. Maybe she was going to lend it to a friend. Are you suggesting that by legally carrying lawful tender she was somehow engaged in something shady?

Because it wouldn't fit in her purse.

And that was the first thing that popped into your skull why?

She may have been taking the cash to the bank for a deposit. Having the cash on her may have been part of her routine depending on what she does. Who knows. But these guys knew she had it on her somehow. It's not her fault for carrying money.

Really? Asking why she had $$$? Good thing she wasn't wearing a skimpy outfit or she might have been sexually assaulted too.

yo! or carrying her cat cuz the NYPD would hav slapped her puss!

Between my $3k laptop, my $399 iphone, my $500 watch and a couple hundred dollars in my pocket, not to mention the nice new metrocard, I carry twich as much around as she did every day but that doesn't mean I'm asking to get mugged. When the owner of the 2nd Avenue Deli was mugged and murdered on his way to the bank, no one asked why he was carrying so much money around, or if they did then they were just being crass.

1) she can carry whatever she wants...but I suspect her robbers knew she had the money OR she lied.
2) who uses cash anymore?

They might have just lucked out finding a victim with all that cash in her bag. Like another poster said, if you add up what we all carry every day with electronics and all that, odds are if you rob someone, you will get a phone or some cash.

I'm more inclined to believe they knew she was carrying the money. That's why cash machines at banks only give you a limit of $400. The only thing I can think of these days that requires cash are drugs.

1:14 you could not be more wrong about the murder of Abe Lebewohl. While still unsolved, there is no doubt it was a set-up. Not a random bit of street thuggery.

5:32 the reason cash machines limit the per transaction withdrawal amount is not because they are afraid someone will mug you.

"The only thing I can think of these days that requires cash are drugs."

I'm in the antiques business and must pay cash for just about everything. That entails carrying around a lot of cash. (and I'm posting this anonymously so I don't target myself as a cash carrier!)

@6:44 And you know that this crime as not a setup how? Maybe you should contact the police with your insights and information since both crimes remain unsolved.

732 there is nothing i know that the police do not. And regarding this current crime, i have no idea whether it was a set up or not.

I know it's an initial thought but in this area are alot of businesses making daily deposits of cash. No matter.

Awful this was brazen and in light of day.

Cause that's what people care about today, not the victim of theft.

Yes. Ano 1103 - we just wish the thugs killed the victim then all would be right. You are a genius.