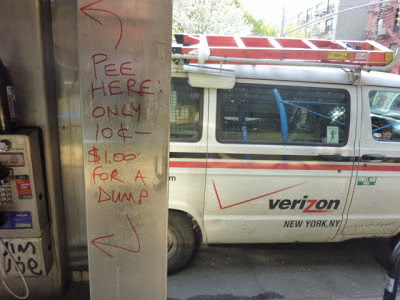 [Do you remember the times that we had...]

Meant to mention this sooner... On Monday, Mayor de Blasio announced the winner in a competition to replace the city's pay phones.

LinkNYC is a proposal for a first-of-its-kind communications network that will bring the fastest available municipal Wi-Fi to millions of New Yorkers, small businesses, and visitors. The five-borough LinkNYC network, which will be funded through advertising revenues, will be built at no cost to taxpayers and will generate more than $500 million in revenue for the City over the first 12 years.

By replacing the aging network of public pay telephones with state-of-the-art Links, the City aims to transform the physical streets cape — and New Yorkers’ access to information — while also creating new local jobs for the development, servicing and maintenance of the structures. 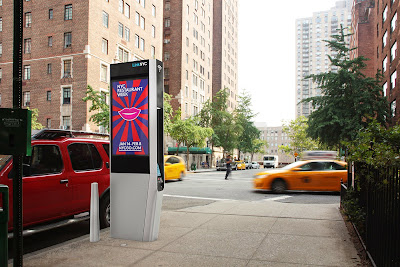 The city will eventually replace the pay phones around the city ... with a few exceptions. Via the Times:

The city also plans to remain hospitable to the cape-wearing set. CityBridge said it would maintain three existing “Superman pay phones” scattered along West End Avenue, where a small number of traditional phone booths have survived.

Anyway, you have a little time left to bid farewell to the World Famous Pee Phone™ on Avenue A at East Seventh Street. Maybe one more winter together.

And no word yet if those fancy interstellar, download-25-years-worth-of-the-Simpsons-in-47-seconds LinkNYC things will have a little shelf to hold the vodka like the World Famous Pee Phone™. 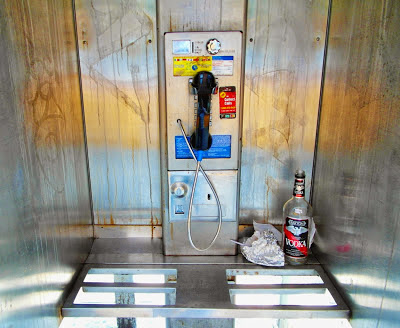 Previously on EV Grieve:
The Miracle on Avenue A™: World Famous Pee Phone™ has a phone again

Out of order: World Famous Pee Phone™, others, face a future without quarters, whiskey

All is well at the World Famous Pee Phone™
Posted by Grieve at 4:59 AM

Note that if they can do this type of "free" system, they could also do a city-wide system that would cover all of the city, including your apartment. That would give you free internet.

But then of course, you wouldn't have to pay comcasttimewarnerrci - which means the politicians wouldn't get their kickbacks.... err, campaign contributions.

I have used pay phones within the last three years.

I definitely used one during the blackout of 2003. There were long lines to use payphones since cell phone towers were knocked out.

We'll have another blackout. But no pay phones to connect with loved ones.

Not everyone has a smart phone, including me. So these wifi spots are useless to me but pay phones aren't.

I don't see this change as a sign of progress but a sign of classism. It's another case of this city catering to the well-to-do.

You may argue that even lower-income people have smartphones. I know they do.

But if you are poor and rely heavily on pay phones you're fucked. And the City could care less.

Of course the company is called CityBridge.

please remember nothing is ever really "free"

Supposedly you will be able to use these kiosks to make phone calls as well. We shall see. But let's hold off on the backlash. Every once in a while change can be positive.

Anonymous @ 8:20 AM, the description of the kiosk says:

"Among the many features of the LinkNYC terminals are free phone calls to anywhere in the U.S., a touchscreen tablet interface to access city services, interactive maps, free emergency and information calls, charging stations and displays for advertising and public service announcements."

It sounds like it will do a lot more than the old pay phones did. And you don't need to have a smartphone to use it.

Thanks for letting me know we could also use them to make phone calls. That is good.

Mark my words, this will be another boondoggle. Anyone remember Michael Bloomturd's infamous New York CityTime?

Call me old fashioned...I still only pee on analog phones.

This proposed public-private venture is closer to CitiBike than City Time.

In terms of sheer dollar amounts, graft and corrupt mismanagement, City Time is more like the 911 Call Center scandal (both of which happened on Mayor Bloomberg's watch, although City Time started under Mayor Giuliani).

What I found most remarkable about the City Time scandal - apart from the fact that it was barely in the news despite being the biggest scandal in NY State history, in terms of dollar amounts - was that somehow the DC-based contractor at the center of the scandal magically came up with HALF A BILLION DOLLARS restitution on THE DAY BEFORE Bloomberg was scheduled to testify in court as to what he knew and when he knew it.

Gee, now who do we know who might have been able to come up with $500 million, on short notice, to keep the then-mayor from having to testify under oath, which possibly could have led to his prosecution as a party to, if not the outright mastermind of, the corrupt deal?

this is for city wide total surveillance, part of the Fusion Center TIPS program. do you really want to be baking nonstop in microwaves everywhere you go?? this will go down in emergencies like Hurricane Sandy.
more money wasted on b.s. like the millions spent for WIFI on the subway that NO ONE uses- yet we bake in the waves and are watched continuously. Wake up