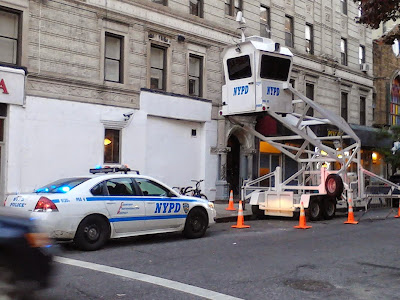 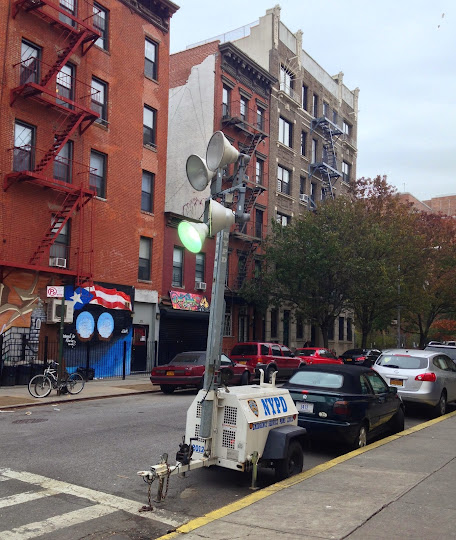 Their arrival coincides with the report of a shooting on Nov. 7 outside the Mariana Bracetti Plaza public housing development at 251 E. Third St. west of Avenue C. According to CBS New York, the victim suffered non-life-threatening injuries. There hasn't been any further information about this shooting. 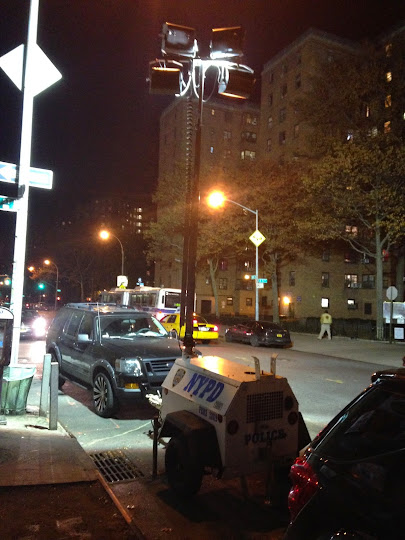 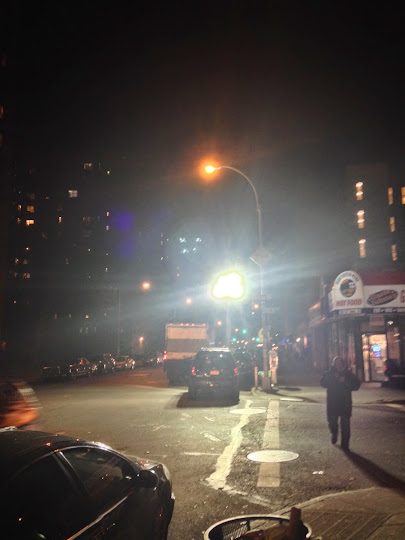 There are unconfirmed reports of a recent shooting on this corner. 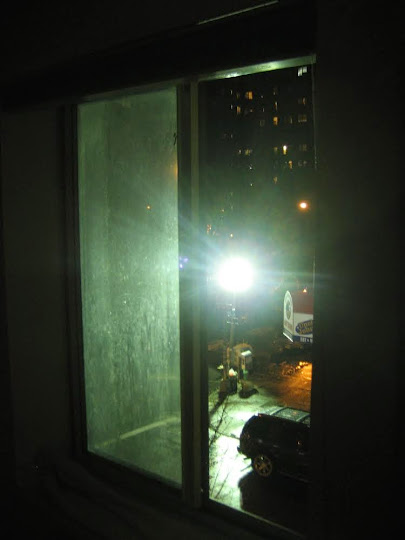 Morris asked the NYPD if the lights could focus more on the street and less on the building. So far nothing doing. He says a call to the 9th Precinct about the lights generated this suggestion: Call Commissioner Bratton's office.
Posted by Grieve at 5:10 AM

The West Village gets Luxury Designer Landscaping, Yacht Marinas and The Highline, while the East Village gets Police Sky towers, Floodlights and Omnipresence. Some things never change, now will someone tell the EV real estate developers with overpriced apartments on Avenue C & D to mention these unique neighborhood features in their selling points?

Can we get some lights for 13th Step?

Avenue D needs protection, I don't want it to return to the days when kids couldn't play outside; but, these towers make one feel like it's a siege. Or a prison camp. There's got to be a more effective method of dealing with street crime than planting towers there.

olympiasepiriot, I agree. It'd be better for there to be beat cops walking around ensuring people are safe.

@RJJNY: It rubs the lotion on its skin or else it gets the hose again.

please point those lights right at the roof of bloom62 or even better right into Ben Shoul's office, sure to find crime there.

To take a term from Usher "Put them on Foot Patrol" or are the 9th precinct's finest too afraid to find themselves out in the open? Lord knows with the way that precinct does business its officers surely would be left in the cold if they got into trouble. Sorry boys the public has no love for you!

As is par for the course, it's the Police that are the problem and get the criticism...NOT the degenerates who commit (violent) crimes and make life miserable for many of the good people and families who reside in that area of the neighborhood.

Pinch, The problem started with the way the story was presented, ending with a pointless complaint about the lights. It's design to elicit these comments.

Pinch— its racist to blame anyone except the Cops. The criminals are
never to blame. Did you miss the memo?

Why aren't the cops simply out on patrol instead of all this capital intensive surveillance equipment being used? Beaming bright lights into people's apartments is a form of harassment. If any of us went down to the precinct and beamed a comparable light in we'd be arrested in minutes.

Beat cops? Most of the new hires are suburban white kids who love being in their cars, where it's safe and they can fiddle with their text messages to their loved ones. Even the old hires are now too out of shape to walk.

Actually the class that graduatex this summer was majority nonwhite. The 607 new cops have families that movex here from 47 countries. I know a female rookie got teeth knocked out. But don't let facts get in the way of your racism and stereotypes. Jerk.

sorry I meant graduated and moved keyboard issues- sorry about that

The light was repositioned at about 7AM this morning and is now pointing into my bedroom. I got home at 5PM today and the light was on, it doesn't get turned off until day break. UGH! Call PSA 4 to get this removed. PSA 4 Community Affairs Office at 212-375-9371.

so, some don't like the police to be spoken about- Well what about the degenerate scumbag criminal cops who fabricate evidence,and perjury themselves in court in order to feed the district attorney's false list of convictions.

The real criminals are in fact the police themselves they feed the politicians and the corrupt system that we all allow to remain in place.

I say we begin by removing a few pensions start throwing some gold shields, and a couple of attorneys behind bars and maybe just maybe we could set ourselves on the right track to seeing through to a better future!

ANON November 19 7:51PM...Ok, Ok. You win. “The real criminals are in fact the police themselves,” there’s not significant problems with major crimes within NYCHA, and the good people and families who reside in the city’s Public Housing don’t care at all about any of this because it does not affect them whatsoever. So NOT addressing the factors that lead to violent crimes is the way to “set ourselves on the right track to seeing through to a better future. “ JUST in case, by chance, you’re interested in facts, follow the link (from April 2014) below regarding serious crimes within New York City’s Public Housing (but I know, I know these facts are invalid because Police bad, bad people). The point was not about saying the Police are perfect but whatever.

Crack down on the poor so the gangs of white males in stripey shirts can assault people without fear of reprisal. If you pay exploitive high rents around here,.you are causing this, like it or not, get real.