East Village etiquette for AirBnBers: 'Don't piss off the locals' 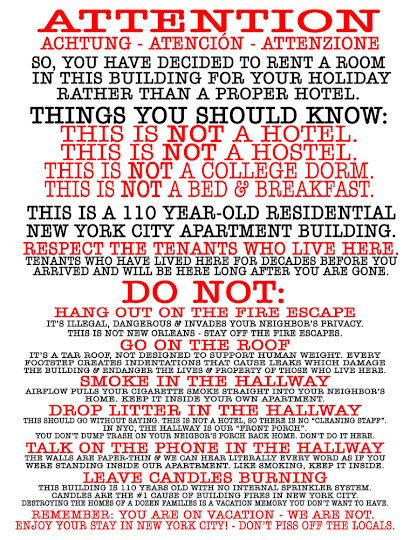 Here is an Urban Etiquette Sign from inside a 110-year-old tenement on First Avenue near East Sixth Street that has seen a weekly parade of transients/backpackers/tourists for the past year.

Per the sign's creator:

I know it puts me in the category of 'passive-aggressive note-posters.' I don't care anymore.

New York Attorney General Eric T. Schneiderman recently announced that nearly three-quarters of all Airbnb rentals in the city were illegal.
Posted by Grieve at 5:06 AM

You know NYC has jump the shark when half of the people on a sidewalk are tourists and I'm not talking Times Square or just outside of Momofuku. I watched the local news on tv reporting a story about xyz... the reporter did the usual man on the street interview and everyone of the 4 people they spoke with was a (foreign) tourist.

Hate hate hate AirBnB... Because of all the issues listed here + risk of bed bugs etc. being introduced into the building. We had an AirBnB renter in the building and fought hard (successfully) so that he wouldn't have his lease renewed.

If you rent your place on AirBnB, be prepared for your neighbors to fight. We do know that if we can't get rid of you, we can make the stay here a *hell* for your visitors, so they start leaving bad reviews on your listing and people eventually stop coming. And we will do that to protect our community and quality of life.

AirBnB is vile. Apartments are not hotels.

Among its many sins, only a fraction of which are listed on the sign above, is the unintentional effect of driving up rental prices. So much for helping low-income residents!

There is nothing passive-aggressive about that note. It's fully justified and reasonable. Really, it should all be common sense, but common sense is far from common apparently.

Agree with 10:01. Totally well-written and reasonable. With fewer words and more white space, the targeted audience might even read it!

I agree that the behavior outlined on this note should not be tolerated but I don't believe it should be used as a blanket attack against AirBnB. I was under-employed in 2012 so I rented out my spare room on AirBnB. I was present when the guests were staying there and I probably had about 30 or 40 guests over the course of the year. None of them exhibited the kind of behavior outlined in this note and I met a number of interesting and pleasant people from around the world. As long as guests are following the house rules set down by the host, I see no problem with AirBnB.

The bedbug excuse just sounds like paranoid hysteria. Unless you are a celibate loner, I am sure you have guests over: sex dates or other dates, friends, holiday parties, visiting friends who sleep over, pot dealers, etc. Bedbugs do not discriminate.

No, hon, you are a genius for posting this. It's amazing how so many in this self-absorbed generation have to have their hands held and be taught common sense and basic courtesy, but such is the reality today. Good on you for schooling them in it. Sorry you have to take on the job their parents didn't do and school them in the first place.

Renting out apts as hotels to transients is illegal in NYC. If you're sick of the transients in your building, call 311 and say "illegal hotel" when prompted. Then file a complaint. You can do it anonymously. Save the reference number of your complaint and email or phone it in to CB3 which is tasked with overseeing stuff like this. The more of your neighbors who call the better.

We just got rid of an illegal hotel apt in our building this way. It turns out that the guy renting it didn't even live there. He lived in Jersey and evidently had a few apts around town that he rented out as a business.

Bedbugs are much more prevalent where people get recycled, like hostels and hotels. When you get someone into your apartment who's been traveling and staying in hostels/hotels right before, they are more likely to bring in bedbugs than someone who just lives in their own apartment before coming over. I've caught bedbugs traveling in many places, but because I live in my building and care about it and my neighbors, I always took very aggressive steps not to bring them back home. Tourists have no reason to care the same way about a place where they only plan to spend a couple of nights.

Love this sign, and it could be addressed not only to Airbnbers but the woo-hoo crowd, too. The newer tenants in our building party on our weak tar roof, light candles then lock themselves out of their apartments, scream in the hallways and act like they are living in a dorm.

I love this not-so-subtle (but subtle enough) way of letting the city know that there are possibly illegal Air BnB'ers in these apartments.

Every apartment building overrun by Air BnB renters is probably the result of a conscious decision by a landlord to run the building as a hotel.

There ought to be a tenant's group distributing these signs to all apartments that are having the same issues with AirBnB renters. Post it in the front door and shed a little light on the darkness to let the city know where it's going on.

Side note on bedbugs, these guys drop like dimes with a bit of DDT, which is actually not particularly toxic despite what you may have heard. Won't bore with the whole sorry history of the ban, you can research that yourselves easily enough. Actually considerably LESS toxic than the repeated applications of alternatives that folks endure currently.
Of course, it is virtually impossible to get DDT these days, even with the Internet, the DarkNet, etc., you have a better chance of getting a legitimate Quaalude, meaning zero.
Here and there a backyard chemist will brew up a batch, the synthesis is not all that difficult, but it's not for sale, rather a special order item for a friend in the business.

I frequently monitor AIRBNB for apartments in my building and turn them over to the landlord. Friends of mine do the same thing. Takes care of the problem real fast!

BRAVO. excellent sign! can i steal, word for word? (lemme know thru grieve, seriously, if it's a prob.) we have the exact same situation in our building on east 3rd street. the police know (they were called once after drunken tourists broke a window above a fire escape and big pieces of glass down into the street), the DoB knows, the fire dept knows, we have camera footage of "guest" coming in and out. (his listing isn't on air b&b -- it's on another illegal hotel site.) but this is a condo and it is hard and expensive to get an owner out, even with proof of illegal doings! we're working on it.

To the poster at 2:03 p.m., video evidence is great. If you can catch the tourists going in and out of the apartment, do it!

@Anon 1:59: Is it actually possible to plug your exact address into airbnb to check for listings in your building? If so, I'm gonna do it!

Also, I encourage the designer of this poster to market it on a larger scale. I'd love some for my building. (There are a couple of typos that I'd be happy to point put if you're considering a mass distribution.)

I live in a co-op that had a sublettor who did AirBnB, much to our chagrin. We contacted the owner and got the guy out quickly as a lease violation. Is there anything in your building's code that makes it easy to get people out? We also considered using the sublettor fees on AirBnB-ers -- they're $250/month in our building (and increase as the years pass). Getting a bill for $250 per night would give your co-owner pause, right? Do you have a way to petition your condo board for new rules and fees?

Haha. I believe that my former roommate made that sign.

To find out if someone in your building is using Air BnB just do a search of your neighborhood and click on the links on the map close to your address. Be sure to pick a wide date range for your "stay" since they will not show listings that are not available in the date range you enter.

You can easily tell if a listing is in your building by the pictures and descriptions, and they even have a picture of the person renting it out so you just might see a face you recognize.

Then just for laughs book a night and go stay over at your neighbors apartment, won't they be surprised. Tell East Village Today I'll be right over!

I love the posters on here that say no one has any property rights, deal with grafifiti on your doors, rent regulation, life was great when the EV was full of squatters and drug addicts, but put some German tourist next to me and suddenly I am entitled to peace, high levels of sanitation, no drugs and whateve else I demand

what if my landlord is renting out an apartment (or 3) on airBnB? it's a rent controlled/stab building, but when the older tenants vacate, suddenly it's a hotel room, and management has the keys. just curious, thanks!

Anyone walking on the roof better have some effing wings or some really good shit. Hoo Rah! Disclaimer: I am not a robot.

"I love the posters on here that say no one has any property rights, deal with grafifiti on your doors, rent regulation, life was great when the EV was full of squatters and drug addicts, but put some German tourist next to me and suddenly I am entitled to peace, high levels of sanitation, no drugs and whateve else I demand"

Being against graffiti, addicts, crime, and even for rent regulation is completely consistent with demanding "peace, high levels of sanitation, no drugs" etc.

They should put that sign in my building, for all the TENANTS and their jerk off friends. All the foreigners who stay are the peaceful, quiet and courteous people in the bulding.