Gym taking over part of the former Mondo Kim's space on St. Mark's 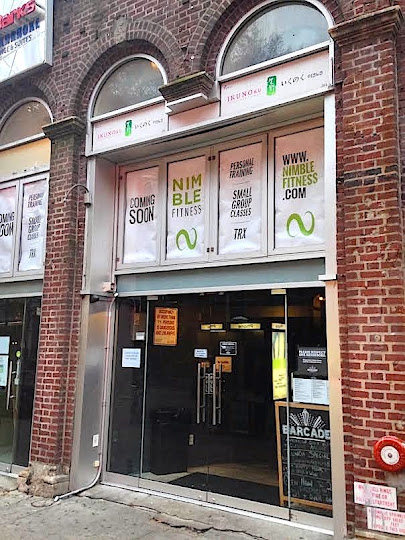 They'll be taking the space above Barcade that had been on the market for months.

Here's more about what Nimbler offers via their website:

We bridge the gap between physical therapy and functional strength through movement. At Nimble you’ll work with a team of dedicated professionals that are passionate about helping you achieve success through an integrated training approach.

Previously, before the quick succession of ground-floor restaurants, No. 6 was home to Mondo Kim's ... and going back ... No. 6 was first, starting in 1913, home to the Saint Marks Russian and Turkish Baths ... which, in 1979, became the New Saint Marks Baths, the gay bathhouse (purportedly the largest one in the world) that the city eventually closed in 1985 during the AIDS epidemic.

Also, in 1914, The Modern School — "an anarchist school with Emma Goldman on the board," according to NY Songlines — had space in the building.
Posted by Grieve at 5:05 AM

More gyms... I guess when you spend your days eating cronuts, biscuits made with butter and lard you need a gym membership to look good in those ugly yoga pants.