1 more in-store concert for Other Music 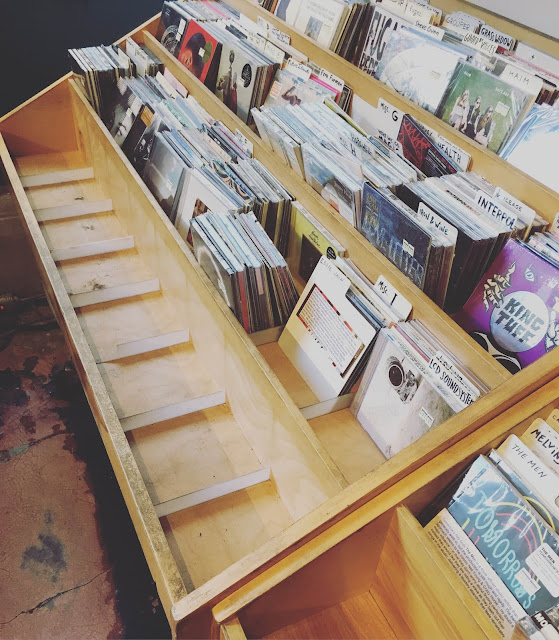 As you might expect, the selection at Other Music is starting to thin out a bit leading up to its last call on Saturday after 20 years in business.

However, there are still a lot of new releases available. (I like the new Psychic Ills ... I also picked up Thee Oh Sees: Singles Collection Volume Three.)

Despite the impending closure, there's still a relatively upbeat feel to the store, that it still has a purpose... unlike, say, Kim's Video & Music on First Avenue, which plodded along on a death march in the summer of 2014. A fixed closing date would have helped. (Add St. Mark's Bookshop to the slow, painful death march list.)

Meanwhile, there's one more just-announced, in-store performance on Tuesday, ahead of its farewell show at the Bowery Ballroom.

Here are details via the EVG inbox:

The final Other Music in-store performance will be with our good friends 75 Dollar Bill, at 5:30 on the 28th. One of our very favorite NYC bands, with a beautiful new album just out, we can't think of any better artist to bring to a close our 20-year in-store series.

And then we take our music to the streets! After the in-store, 75 Dollar Bill and the incredible Matana Roberts will lead us on a march from Other Music, across 4th Street, down the Bowery, to the Bowery Ballroom on Delancey. We want to celebrate 20 years of New York City music and arts culture with all of you, and we hope that whether or not you have tickets to the Bowery show, you will join us for this free event — let’s show NYC that music still matters! We will start gathering at Other Music at 5:30, and the parade will begin moving at 6:30, with Matana’s crew taking the lead, and 75 Dollar Bill bringing up the rear guard after their in-store performance.

The owners of the store at 15 E. Fourth St. between Lafayette and Broadway have cited rising rents and the changing face of the music industry as reasons behind the closure.

MSNBC has a report from Tuesday on Other Music here.

And at The New Yorker, Amanda Petrusich files an appreciation titled Why Record Stores Mattered.

The store’s stock has always tended toward the abstruse. For many years, it was the only place in the city (and maybe on the East Coast) where you could find copies of great but commercially unpopular records: free jazz, certain strains of world music, Krautrock, long forgotten folk balladry. I bought my first albums by otherwise-unclassifiable artists like Arthur Russell and John Fahey at Other Music. I later read from my book about obscure 78 r.p.m. records there. Uncommon but extraordinary records were offered prominent shelf space, and serendipity was always in the air. Station yourself before the bins labelled “Out”—“Out” in the context of Other Music implied either intrepid or foolhardy experimentation, or maybe both—and see what calls to you.

Finally, some former OM staffers are also filming a documentary of the place... if you have anything to share...

If you want to share stories, photos, video or audio from @othermusic please email us: othermusicdocumentary (at) gmail (dot) com