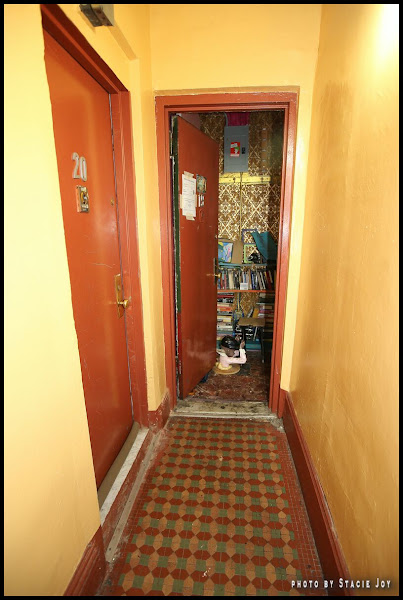 Longtime downtown performance artist Reverend Jen Miller has been evicted from her apartment, which also doubled as the Troll Museum, after 20 years.

Last Thursday, a Marshal reportedly entered her apartment while she was only wearing a towel after a shower and served the eviction notice via landlord Misrahi Realty. (There is a video of the incident here.)

Miller said that she was given three minutes to leave the sixth-floor, rent-stabilized walkup on Orchard Street where she has lived since 1995.

Miller told Gothamist that a series of illnesses landed her in the hospital several times last year, and that she fell behind on the rent. She wanted to work out a payment plan with the landlord.

[S]he insisted she never received warnings of an impending eviction. "On Thursday, they came to tell me I was post-eviction," she said, and "I was shocked." For now, Miller hopes to get a stay for at least three months, she said, but warned that if she's not granted a stay, she may refuse to leave anyway. "I'm at the end of my rope," she said, shaking her head. "I guess they can arrest me. Let them."

She was able to return to her apartment today to gather her things. She invited friends to help pack up (and take some of) her belongings. EVG contributor Stacie Joy stopped by... 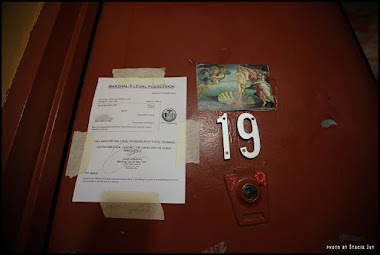 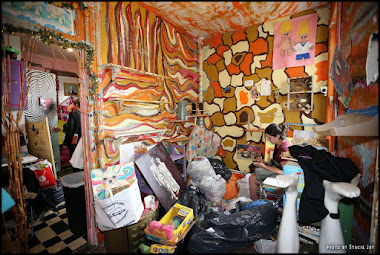 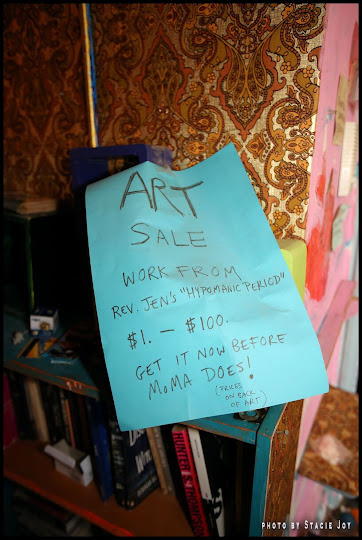 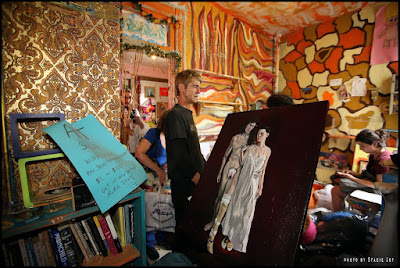 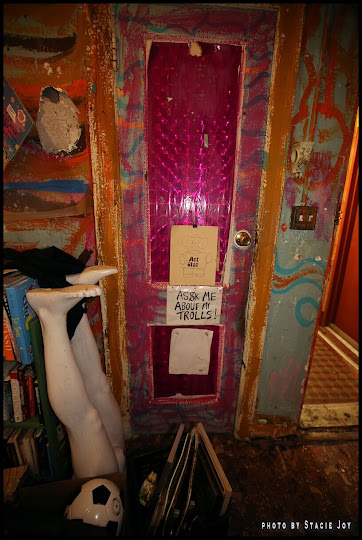 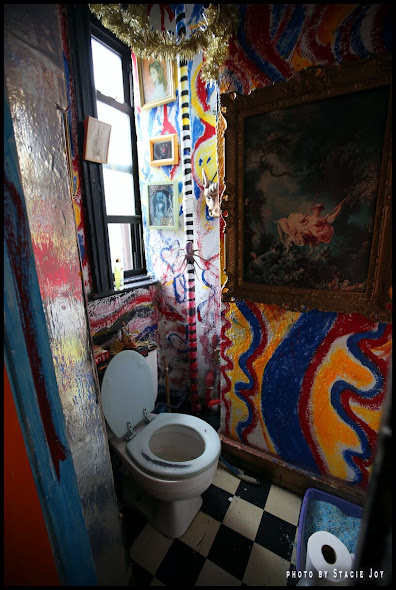 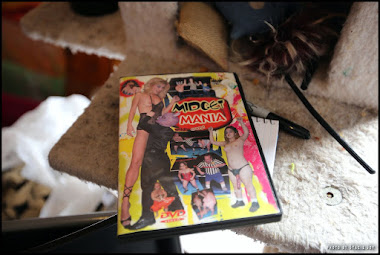 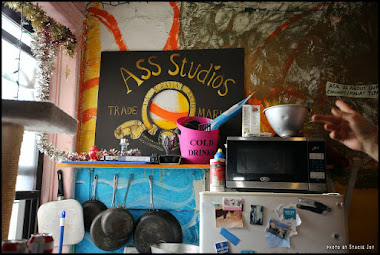 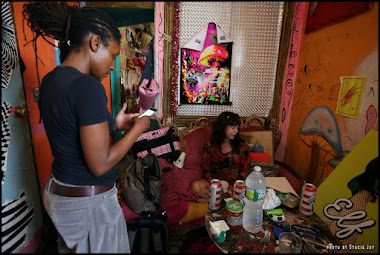 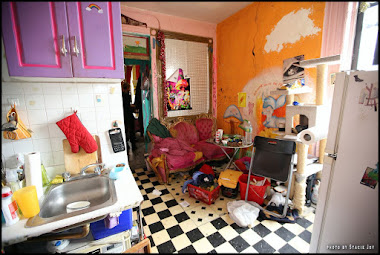 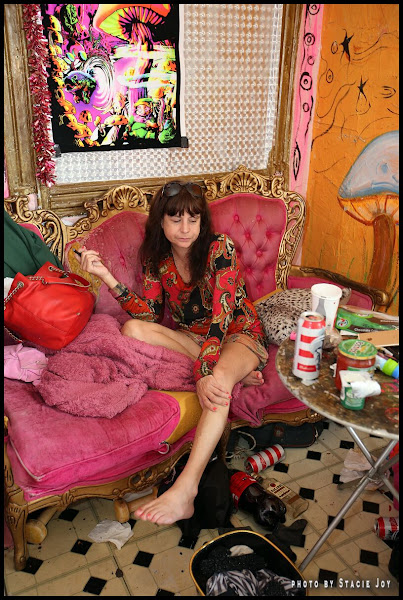 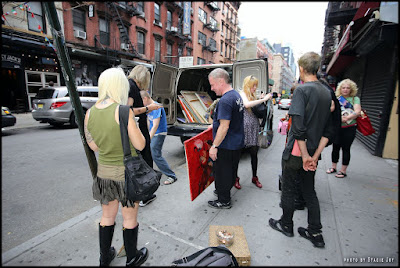 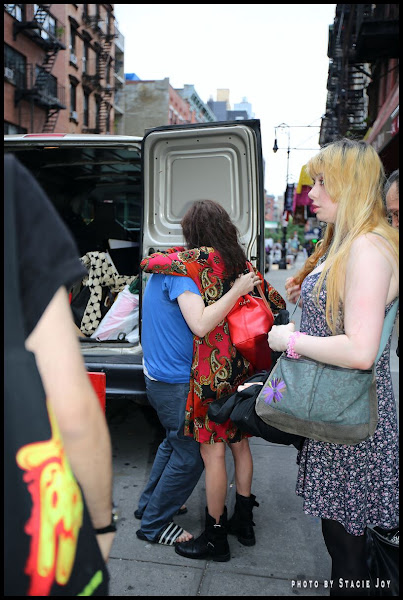 Slum Goddess has more photos and a video here.
Posted by Grieve at 9:15 PM

eh, if you don't pay da rent they throws ya out...

Hope she can regroup...

Where is she going to go? I hope Jen is alright and has a place to stay until she can find a new home.

These predatory equity scumbags will promote this neighborhood's authenticity to the ends of the earth while removing every last thing that makes us authentic.

A sad situation, so many of us are on the edge financially and housing-wise, that an illness, or even just a visit to the doctor/dentist can set us back drastically. Yes, NYC and the LES is quickly losing all its character. Just look at the monstronsities that surround Katz's.

Misrahi always has such sleezy agents (or nice wide eyed ones from flyover states who didnt know any better), i am sure the management of the company is no different.

Why does a tenant expect to live for free in a rent controlled apartment?

There is an old saying where I come from "pay your rent before you eat". It came from a time when tenants had no rights, we are now in that time again. The LES just lost another artist, sigh.

...giving anyone three minutes to vacate an apartment sounds completely illegal. Has anyone contacted the city? HPD? Tish James?

If you don't pay rent for a year, what do you think is going to happen? If you're lucky enough to have a rent-stabilized place, have a clue.

Bets that within a week that quirky, obviously much-loved place is gutted and the "upscaling" begun?

I feel so bad for her. So what's the deal? Was she behind on her rent? How far behind? I think once a tenant is more than three months delinquent the landlord can start eviction proceedings. If it was less than that there might be hope of getting her back in if she agrees to pay in full.

She is quoted in the article on Gothamist as saying she is close to a year behind on the rent and has been in housing court several times over the last year or two.

Sad but a year? She's lucky she made it that far. What "rights" do you have after a year? "Sorry officer, I know I rented the car months ago but I had no other way to get around so I just kept it". Insane.

Sorry but... a year rent-free? She should be happy she made it this long. She should have been evicted 9 months ago. I feel sorry for her but jeez... was she too good for a roommate or a job at McDonalds? The entitlement is astounding!

I hope this isn't true, but I think I am slated to move into this apartment. A while ago, my real estate agent (from Misrahi) told me he had an apartment on Orchard Street that he was hoping would becoming available soon. Last week, he called and told me it would be soon, that he had to renovate it first. It might be that he's referring to a different apartment, but something tells me he's not.

I have to say, the rent I'll be paying is great, for that area.

It seems a bit much that she doesn't pay rent for a year and then gets indignant about greed when she's asked to leave. Maybe I should go out to dinner and when the check comes, refuse to pay, call them greedy, and declare that they just crushed my bohemian spirit.

3:22, this isn't your fault. I wish someone had been able to help Rev. Jen out with her back rent, because today's NYC landlords give concessions to no one. There's no room for error.

Anyway, you sound like a good person and it's a great apartment. Enjoy it, and keep Jen's artistic spirit alive in it. One bit of advice, though: Get your rent history right away from the DHCR and make sure you are not being overcharged -- you say your rent is relatively low, so you may well be stabilized yourself, in which case congrats and welcome to the club. :) But always, always know your rights as a tenant.

This makes me really sad. Things are cut pretty dry if you're not paying rent though. The one sliver of opportunity would be if she truly didn't know about the proceedings. She has to be served personally with housing court papers or have the notice affixed in a very public place, usually her apartment door. If that didn't happen, the eviction process would be thrown out and the landlord would have to start proceedings all over. But she's got to show up for the court dates to make that point. It may already be too late if she missed those.

You can't really make the argument that you didn't know what was going on if you've already been a regular in the housing court system several times in one year. Maybe the art sale should have happened much earlier? I know, I'm in the same situation myself. Good luck, Jen. Your apt. was cool. It's a shame to lose your RS place in the middle of a rent freeze year. That also sucks. Still, we can all plant seeds in other cities soon I guess....

Looks like that apartment needs extensive renovation to get back on the market. 3:22PM, if this is going to be your apartment, expect to pay for a big vacancy rent increase + renovation increase.

Bring back the video of Jen in the towel or it didn't happen.

Again, someone who has given so much to our community is pushed aside. I have been to her place a couple times. Once a group of ladies came to ask if Jen would be open to having a group of kids visit. Jen was so sweet to them. That apt is (was) so tiny and cozy. It's a tribute to her artistic way of simple living. NYC is dying by inches. Another point of light in danger of being snuffed out.

She could always room with someone and might even save on rent/pay less than she paid on her own place. Yeah, it wouldn't be a place all of her own but so what? You're still in the EV. If you work eight hours a day, sleep eight hours a day, are out of the house two hours a day outside of work, and have the bedroom door shut for private time three hours out of six you're at home a day, that's only three hours a day where you're interacting with someone at home - a small price to pay for remaining among your element. That sure beats living in Brooklyn or some other outerborough and having to cough up $117.50 a month for a transit pass to go to and from work in Manhattan and the EV.

You ate the steak, now you have to pay for it! Judge Judy

That video is up on her Facebook page which is public I think. I saw it. It's crazy. She's crying almost and two huge guys are just laughing at her. She has no clothes on and her roomate/friend is taping it. However behind she was in rent what they did was illegal. She has won in housing court several times over the BS the landlord has pulled on her. She may have won again in July and maybe that's why this "mistake" happened. They admitted in court her case was not until the end of July but for some reason she can't go back and live in her place until then. I guess she will see what they say in July as that is when she was expected in to talk about her situation.