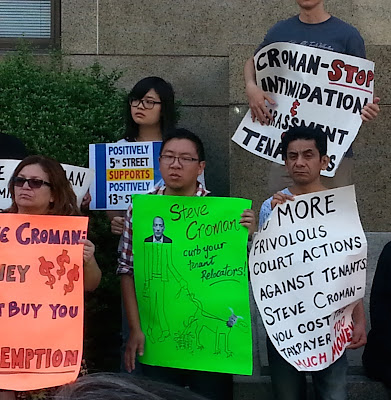 [Photo via a Croman tenant]

Landlord Steve Croman appeared in Manhattan Supreme Court yesterday. Croman, who owns more buildings in the East Village than any other landlord, was hit last month with a 20-count indictment on charges including grand larceny and filing false documents.

As The Lo-Down reported, Supreme Court Justice Jill Konviser adjourned the hearing until Sept. 20. Croman's high-powered defense lawyer, Ben Brafman, said that they were close on a plea deal, according to the Post.

A handful of Croman tenants were on hand to greet their landlord at the courthouse.

Tamalyn Miller, a Croman Tenant at 521 East 5th St., said that even though Croman’s case was pushed back, she’s happy. “The court case may go on and on,” she said, but Croman’s reputation is forever tarnished. “When we were going through this in 2009, 2010, nobody would listen to us,” she added.

Meanwhile, across the street yesterday, The Lo-Down reported that another controversial East Village landlord, Raphael Toledano, was in New York City Housing Court for civil and criminal contempt. He reportedly was there after failing to pay a settlement to tenants at 444 E 13th St.
Posted by Grieve at 4:14 AM

I have to wonder when and where real justice comes. This guy may live it up another summer in the hamptons while some of the tenants he's harmed are still sufferimg from what he did to them.

I worry that a plea bargain for Croman will not affect him very much, because the amount he'll have to pay will be minimal by his lavish standards. Monitoring by city agencies and some well-earned jail time could do wonders, though. That might also provide another warning sign to Toledano, whose business plan seems to be modeled on Croman’s.

I'm glad that noise was made by protesters outside the court buildings where these two predatory landlords have begun to have to answer for their actions.

As far as Toledano goes, rumor has it he may be having money problems.
- Toledano recently sold 332 East 6th Street, a building he bought from the Tabaks. No word if he's sold other buildings.
- Contractors and local vendors have been complaining Brookhill has not been paying their bills due for May and June 2016. Instead, different vendors were being used over the past few weeks.
- A contractor, who also worked for the Tabaks, has recently complained to many tenants that he's owed over $20,000.00.
- Renovation work in 3 of the buildings on E12th Street slowed down over the last few weeks and came to a complete stop this week. No workers in those buildings on Monday 6/19 through Wednesday 6/22. The building super was telling people there would be no work in those buildings over the next few weeks. He had no explanation.
- All tenant's cooking gas was turned off by NYFD on May 18th, 2016 at 325 East 12th Street. Brookhill notified tenants to contact building management to make an appointment so they could determine what work was needed in each apartment to replace existing gas lines. Since that notice, all appointments regarding replacing gas lines were cancelled by Brookhill. Some tenants were offered and received electric hot plates. Many tenants received nothing.

There are no "Stop Work" orders in any of those 3 buildings.

Let's see if Manhattan DA Cy Vance will actually stand up to a rich landlord. I'm not optimistic given the sort of DA he's been. If Vance doesn't sell out, Croman could be in trouble-- he's in front of a smart, tough judge.