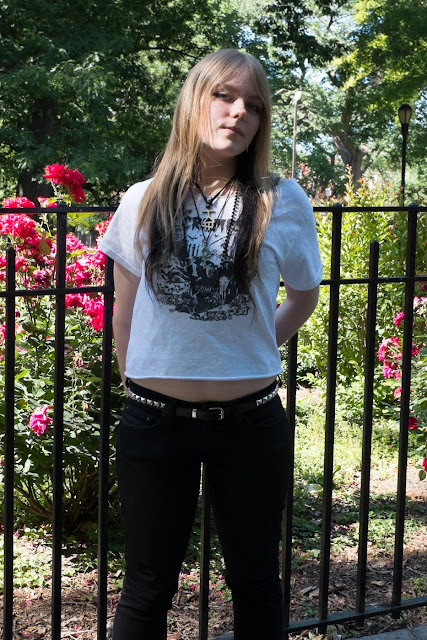 This is Part 2 of our interview with Colette. Read Part 1 here. We start with the last paragraph from Part 1.

I did a lot of research into local musicians, artists, and the area's history to help anchor me. My dad does The Shadow, so I get a lot of information about it, but it never really sunk in. I never really immersed myself in that history and in getting in touch with my community until I dropped out of college and needed to find myself.

In my research, I’d explore the city with new eyes. If you go out late at night and there’s no one on the streets, it’s kind of spooky. You can get really lost in that. It makes you feel like you’ve stepped back in time almost. Time Warp kind of came out of that. To get lost in the past or that fantasy is what I would call a time warp — this kind of void or disconnection from reality. The only thing that could really get you out of that was punk rock or rock 'n roll music. It gets you energized, fired up, and makes you want to do something. There's a sense of urgency in it. I wanted to do something. I didn’t just want to sit around and be sad anymore.

With Time Warp, I am trying to inspire people to act and actually do something instead of just being sad and resigned to the situation we’re in. We need more people to get organized. We need people to get together and actually make some kind of action on a large scale, whether it’s protest, boycott, graffiti with a real message... Anything is better than just sitting around waiting for our doom.

Just go out and do things; be positive. Don't give up. The city hasn’t been entirely lost. Do anything you think will help — use your imagination. Get angry, create your own zine, start a band, post up flyers. For example, I saw a photo of a flyer posted in Chinatown explaining to people that AirBnB is destroying their neighborhood. A lot of people don’t get that what they're doing is contributing to the ruin of the places they visit or move to and that they can either be part of the problem or part of the solution.

John Holmstrom was our first interviewee. In the interview, he encouraged us by saying things like, “The world is coming to an end and you’re going to grow up with this stuff! You guys should be angry! You guys should be doing something to wake people up!” When he said that I was like, 'fuck yeah!'... It really inspired me.

Jeremiah Moss also has a piece titled Get Angry that we included in the zine. It pretty much summed up what I had been feeling. Expect more issues of Time Warp in the future... we've got a lot of ideas a brewin'. We’ve also been putting on free punk/variety shows in Tompkins Square Park with a handful of collaborators, including The Shadow. The shows are happening all throughout the summer and early fall. (Find a list of shows below.)

The city is an ecosystem. While studying biology and whatnot, I noticed that the city itself has distinct parts that it relies on to function. You’ve got small businesses that serve the community and invasive chains that are difficult to compete with. You've also got people that contribute in the various niches they fill. People need a habitat that can support them, too... If people are too occupied with merely staying afloat, they can't do much else. When we lose parts of our city ecosystem, it suffers and risks collapse.

New York is being made to suit the invasive class. They’re trying to make it into Disney World. They’re turning it into an entertainment zone. The New York City I love is vulgar, filthy, and full of unique people. They’re trying to turn it into this family friendly, sterile, clean, G-rated place. New York City is not an entertainment zone. New York City is not Disneyland. I mean, children grew up here and we turned out fine. We don’t need to have everything clean and censored. It’s not meant to be that way and these people are coming in and trying to change it. If you move here and want to be a part of it, that’s good. If you move in and you want to change the place or you don’t want to be a part of it, then what are you doing here? You’re just part of the problem.

You don’t have to be born here to become a New Yorker but you have to be part of the community. Just because you come in here and you paid millions for your apartment or you come in here and you’re rich, doesn’t mean you’re any better than people less fortunate than you. The so-called 'vagrants' have seen more shit, dealt with more shit. They're more respectable than yuppies or hipsters that just come in here thinking they own the place and should be respected, despite their lack of respect for other people.

What a great interview! I will check out the zine. It is inspiring to know young people like this still live in and love our neighborhood!

"You don’t have to be born here to become a New Yorker but you have to be part of the community."

I admire this kid's initiative and positive spirit, but sorry to say I gave up. On the city. The forces that are shaping it now are too strong, and it is not a fight I need or even want to fight.

I like the attitude and even some of the goals of this person. Anger can be a very good thing. BUT, she says that "children grew up here (during the 70's 80's and 90's) and turned out fine." But that's only true for some kids. I grew up here, too. I was mugged twice and shot at once, with appropriate wounds, limp and scares to show for it. I only had one friend who died from an overdose, but I knew of several others for whom drugs and gang violence ended their lives before they could become cool East Village folks.
Safety and freedom from violence is something we all ought to be seeking and like it or not, there are bad and crazy bad folks living in the EV because we (lower middle class and up) either tolerate or ignore or glamorous or feel nostalgic for them and the old days of the EV.
We can have the arts and diversity and unique ideas and thoughts, etc etc etc, but, in my opinion, we have to keep reminding ourselves that the old days were laden with fearful moms and scared kids, like me, who only want to walk though our glorious streets without wondering if we will get home alive.

LOL, I see Colette buried the lede about being Shadow offspring -- she will make a fine journalist. ;)

Seriously though -- nepotism in mainstream media is a huge problem, but you can't argue with the kid of an anarchist publisher wanting to keep the flame lit. That's boss. I love The Shadow, I pick it up whenever I am at East Village Books.

Nice attitude, great kind. But just out of curiosity: How can you leave school "for four months every semester"? Don't semesters each last about four months apiece? But math was never my strong point...

Love the Peter Missing logo necklace she has from the 80's! Keep doing your thing Colette!

I'm guessing she meant she's off from school for about four months between the spring and fall semesters (early-mid May through early September.)

Not knocking her but she's not a kid, she's an early-mid twentysomething assuming she graduated highschool at 18, stopped going to college at 20-21, and has been out of college a few years. When I graduated highschool literally three weeks before my 18th birthday, my "kid" status was over.

"I left the city for maybe four months at a time each semester" ...meaning, I went away from the city for that time while I was attending school.

Turning 22 soon, have been out of school for about a year and a half. As for the 'kid' thing, I don't really care, people will call me whatever they want. I see 'kid' as being a term of endearment or just something you'd call someone younger than yourself..

About growing up here and "turning out fine," I mean that we don't need an entirely family friendly, sterile, clean, wholesome, censored environment to thrive in. The city shouldn't cater to people that can only exist in such an environment-- Times Square or the suburbs, for example.. ya know?