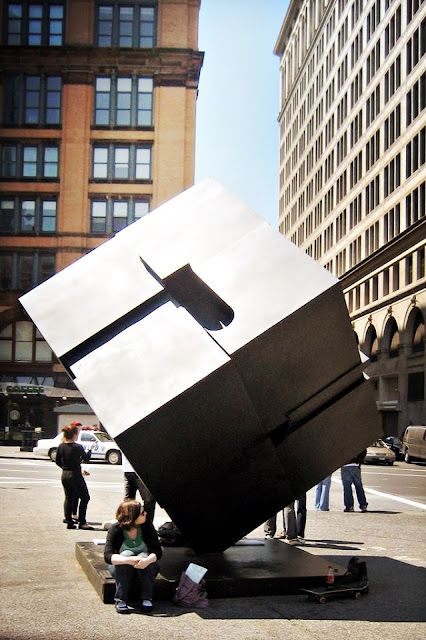 RIP Tony Rosenthal, the sculptor who created the Astor Place cube
Posted by Grieve at 11:01 AM

I love going up to it and spinning it around with a crowd of tourists nearby who have no clue it spins.. Why is it called the Alamo?

Donnie, it's the Alamo because it helps us remember - what the East Village was like before it was turned into the raving, cretin-filled, overpriced shitshow it is now thanks to a series of uncaring politicos and greedy vampire developers. Ruined forever for money, an absolute tragedy.

While they're at it, why don't they bring back a few more... make that a lot more trees. The reconstruction is a vast wasteland... dedicated to bikers and skakeboarders. What a lost opportunity.

In order to better reflect the changing character of the East Village, The Alamo has been completely redesigned and will now have only two sides: one for the haves, and the other for the have-nots.

I heard they installed a Shake Shack in the Alamo... so expect tourists and newbies to stand in line for hours.
Still prefer it over the Kidult Haring man sculpture near 3rd.

It's amazing how they mamage to rip up more and more of the neighborhood, without finishing anything first, so there ends up being construction barriers everywhere at the same time. THanks guys!

I can't wait for this Mid-Town South makeover to end.

How exciting, a wide swath of boring concrete took the city two years to repave exactly the way it was. Only in NYC could this be called a renovation or reconstruction. Thank you DeBlasio for throwing our money away on this waste of a project and torturing us with an unusable construction site for two years - and counting.

What are you all complaining about that concrete was mixed in Brooklyn and is 100% artisanal.

I've said it before and will repeat this ad nauseam: This whole Cooper Square construction serves nobody local and is a way to transfer taxpayer dollars into the pockets of the Triumph Construction Company. This was a Bloomberg brain fart that has been continued by this milquetoast DeBlasio.

I (will always) call it The Cube.

I would LOVE a miniature version of it for my desk.

Hopefully they bring it back completely chromed. Maybe we can get it to bounce a death ray at the death star and evaporate it causing millions of voices to suddenly cry out in terror and be suddenly silenced.

The reconstruction already has *more* trees than what used to be there, and it looks, like there are more to come. WTF are people always bitching for?

Further FYI to the miserable cranks who populate threads like these, people are *already* using the new seating on Alamo Plaza , and there's *already* been several exhibits/displays utilizing the site. I'll bet they'll be sunning themselves on the new seating on the Subway plaza too, in a few weeks.

Dibs on its air rights. And its return ain't a progress without a full liquor license.