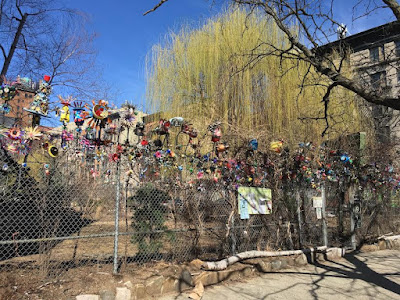 [Photo of La Plaza from March]

La Plaza Cultural, the community garden on the southwest corner of Avenue C and Ninth Street, is celebrating 40 years tomorrow night with performances by Lydia Lunch, James Chance and the Missing Foundation, among many others.

Here's more information about the event:

Join us for a party for the 40th anniversary of one of NYC’s most forward-thinking venues, a storied legacy of the 1970’s downtown art scene: La Plaza Cultural, a green, multi-use, civic, performance space, spread over a third of a city block on east 9th street at avenue C. The evening will celebrate downtown NYC's legacy of visionary, outsider music and art, social activism, community, and sustainable design.

La Plaza was the brainchild of guerrilla activists, including the Latino group CHARAS, who seedbombed the trash-filled vacant lot in 1976. La Plaza's founders and early supporters included era-defining artists such as Buckminster Fuller, who built one of his geodesic domes onsite, the anti-architect Gordon Matta-Clark and legendary street artist Keith Haring. Its 40th anniversary party will feature performances by legendary artists of the period and emerging artists alike.

You can find more about the evening at the Facebook event page here. The event is from 5-9:30 p.m. tomorrow (Saturday).

Here's more on La Plaza's history and how community gardeners came together to rebuild after Sandy...