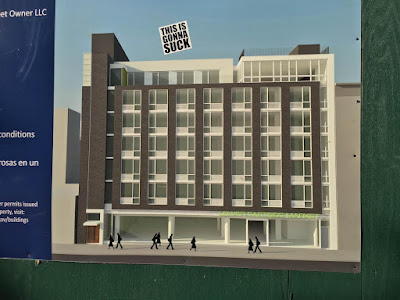 As we first reported on May 31, reps for the new development at 438 E. 14h St. are lobbying to receive a zoning variance for a 12-story building — four more than the area's zoning allows.

In an analysis of the plot, the developers said that they found "unusually elevated groundwater levels and exceedingly soft and unstable soil (owing to the presence of an underground stream) ... result in extraordinary construction costs." (Apparently those soil samples from September 2014 didn't reveal this.)

On Wednesday night, the reps made their case with Community Board 3's Land Use, Zoning, Public & Private Housing Committee. It did not go all that well, per DNAinfo's Allegra Hobbs:

“If you guys didn’t do your homework, I’m not sure why the community has to suffer for your error,” said Alexis Adler of the East 12th Street Block Association. “It is going to change the total character of our neighborhood….We’re losing affordable housing and people are being pushed out so you can put up taller buildings.”

Preservationists, residents and block association reps gathered at Community Board 3’s Land Use Subcommittee meeting on Wednesday to rail against the plan, arguing that the added height would alter the neighborhood’s character, while the added market-rate units would only threaten to displace longtime locals.

In the end, the committee reportedly tabled the vote and asked the reps to return after "exploring alternatives to increasing building height and requesting a greater percentage of 'affordable' units.'"

The property here near Avenue A in Stuyraq was home for years to the Peter Stuyvesant Post Office and long lines.

On Monday, Councilwoman Rosie Mendez and CB3 are hosting a public meeting with reps for the developer. The meeting is solely to discuss the impact of the construction on immediate neighbors. There will not be any further discussion about variance plans, etc. ... the meeting is at 5:30 p.m. June 20 at the Church of the Immaculate Conception on 14th Street and First Avenue.

A look at the new building coming to the former Peter Stuyvesant Post Office property
Posted by Grieve at 4:28 AM

Thank you, community reps, for stepping up! But this emboldened act would not even had been attempted had we state and local government with us. Both Cuomo and DeBlasio are working against us, and the insult is that they are being paid to do it with our tax dollars.

Grieve please keep us posted when the next CB zoning meeting is announced.

About time. CBs are finally getting savvy to the bs developers sling, like ex-Bloomberg publicist Chris Coffey is attempting to do to whitewash I/kon.

Congrats and thanks to the 12th Street Block Association. Please keep up the fight for our neighborhood.

Affordable housing should not be part of the discussion. No variance, period. No doubt they will cave in to more affordable units and CB3 will go along with their too large building.

Residence from the North Avenue A Neighborhood Association, the 13th Street Block Association, the 12th Street Block Association, along with representatives from EVCC and GVHSP made the case that the developers should have known, like everyone else, that their was a stream under their property, and asked the board to deny the variance for several reasons including the overwhelming negative consequences more lux housing units would have on existing residents and local small businesses.

The groups requested the developer to make all the units on the additional floors 100% affordable and the developers said that was impossible as they would not be able to get a reasonable financial return. These arguments impacted the board such that the initial motion to approve the vatiance was denied 9 to 4. At that point after much back and forth between the board and the developer, the developer withdrew to explore alternatives to their iitial proposal and to provide financial information as to why the variance was neccessary.

9:13 AM: Agree. Don't give away the skyline for a few affordable apartments.

If the Board denies any variance to the original deal it will send a very strong message to the real estate industry... Don't f--k with the EV.

Small businesses don't get bailed out when the screw up why should these developer's demand we save their profits on an ill conceived project. The land rush, or these fools rushed into a projected ill prepared, too fucking bad.

@ both anonymous opposing the strategy to ask the developer for more affordable housing - it is an easy strategy for you to criticize but something the Board could hang their hat on in denying the application. Frankly just making the argument that you don't want to give away the skyline isn't going to resonate with the CB. So instead of critiquing those that showed in opposition and secured this initial denial, perhaps show-up at the meeting with Rosie Monday evening and give her your opinion or show up at the CB meeting next month. There were a bunch of comments against this on the Grieve over the past few weeks and only a small a group of residents took the time to research the proposal, craft an argument and sit for hours at a CB meeting. So instead of critiquing their strategy perhaps join them in opposition, because these guys will be back so . . . all are welcome to come and oppose and secure a win.