Report: Cuomo clears way for brunch drinking to start at 10 a.m. on Sundays 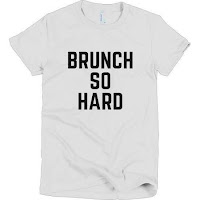 As you may have heard, Gov. Cuomo and the NY Legislature agreed to reform the state's Alcohol Beverage Control Law that reportedly dated back some 80 years.

So, soon, bars and restaurants in the city will be able to start serving drinks at 10 a.m. on Sundays instead of noon.

Nicolas Lorentz, 35, general manager of Lafayette in the same neighborhood, said the extra two hours would boost the bottom line.

“The brunch crowd is a drinking crowd. This is helpful to any brunch restaurant in New York City. We will get more people coming here early,” Lorentz predicted.

This may go into effect as early as this coming Sunday. Which means that you may have to avoid parts of Avenue B even earlier now.
Posted by Grieve at 2:01 PM

Great - more drunks, starting earlier on Sundays. Thanks for NOTHING, Governor.

Albany just cares about collected taxes from the sale of alcohol, so fuck us who to live near these loud drunken brunch hell holes.

It's a bit disconcerting how nonchalant people are about their alcoholism.

It is an archaic law and as an adult, I occasionally like to have a drink before noon on a Sunday out. However, in the case of most of today's brunch crowd, those cocktails will be spewed up on the sidewalk 2 hours later. So, Cuomo has added 2 extra hours of East Village vomit volume to our already obnoxious Sundays.

Of course they did, because none of them are personally affected by the shrieking, fighting, vomiting, ill-dressed boozers trolling the neighborhood for the fastest and cheapest drunk they can tie on. They're too busy counting the campaign contributions they sold their votes for to the "hospitality" industry. Too bad our "hospital" industry can't compete with the same level of efficacy.

@2:30pm: You are completely correct about that. You'd think alcoholism and binge-drinking were things to be proud of, instead of ashamed of. But it seems today's precious little snowflakes have had their sense of shame surgically removed. They delight in being seen drunk, and in behaving like complete morons.

Nothing like a "legendary boozy brunch." Fuck us, indeed.

You are disingenous if you think the drunken idiots of Saturday night are gonna 1. go to bed earlier than 3-5am 2. get up at 8-10am to start drinking at 10am and 3. drink at 10am or drink like they did Xpm Saturday to Xam Sunday then.

You're a couple in their late thirties or older who stayed home and went to bed at 2am Sunday morning. Both of you get up at 9am and want Bloody Marys so you go to a brunch place to get them. This is the demographic group restaurants are targeting primarily.

As if SantaCon needed any more help turning thousands of idiots into morning drunks. Now all the bottomless brunch places can start blasting their binge drinking music at 10am. Thanks Cuomo!

Now I have to wake up two hours earlier on weekends to do my errands and have a nice leisurely walk before the weekend tourist and B&T brunch invaders start with the unlimited boozy brunch.

Geeze, I never knew such a law existed. As a middle-aged early to bed early to rise type, I won't expose my two "go to" brunch spots that have been turning a blind eye and keeping me blissfully ignorant for well over a decade.

Was there some reason in this day and age you could start before 12 on Sat but not Sun? No. Good change.

"I don't see Bro and She-Bro who drank 11pm to 2am getting up before 10am to 12am to drink again, I just don't."
It may not be the same AA in training client but you cannot deny that brunches especially the "all you can swill" ones are on every corner come Sunday.

It for the real estate industry. If you can make more money from booze you can afford the outrageous rents. But no matter what.. You-lost-my-vote-governor.

@anonymous 3:10 pm. Wish you were correct, but you are not. Restaurants will cater to whoever shows up with money as they are all paying too much rent and competing for the same buck.

Many of the restaurants in the EV have been ignoring the law for years anyway. Maybe not at 10, but if you go in at 11:30 or so and order a Bloody Mary you're not likely to be turned down.

Was it a Jesus restriction? If so, progress!

3:10, so what you're telling us is we're dealing with two different sets of wastrels? Vomitty, schreechy twentysomethings taking over the hood on Saturday nights, and their ten-years-later counterparts telling themselves they don't have substance abuse issues over eggs and bloodys on Sunday mornings? Is this info supposed to be reassuring or something?

Cuomo is a stooge. Wants to be just like Hillary and rise to prez. What's he throwing a bone to the hoi polloi?

it really isn't when you start drinking but how much you drink and how you behave,
we have a bunch of inconsiderate mindless selfish ... people visiting the neighborhood we live in. they don't (can't?) behave that way in the suburbs so they come here to party and fuck up.
so extend the allowable drinking hours (will it be till 6am soon?) and take away the so-called quality of life laws (street drinking and pissing, noise, etc.) and you have a recipe for disaster,
get drunk all you want to, just be quiet and respectful (ha ha) to the neighborhood you choose to dirnk in.
and to all you bar owners who say what a difference it will make to your bottom line - those respect your neighbors signs do nothing - reign in your drunks or open up where you sleep.

@3:10pm: Anyone who gets up at 9am on a Sunday and needs to be drinking booze at 10am, definitely has a problem. I don't care what age they are.

Of course the law was changed. Cuomo assembled a committee of people in the bar/restaurant industry and ask for how to improve the system. The results: expedite the licensing process, extend hours and approve as many licenses as possible because it creates jobs - unlike any other business that would have moved in. Only bar owners create jobs, no one else.

If a new bar and restaurant needs to extend drinking hours just to pay their rent then the rent is over market value. When a bar and restaurant pays these insane rents it justifies that rent to the landlord who in turn will raise the commercial rents of other properties. It has come to pass that only business with a liquor license are able to open in the LES due to these high rents, which makes our neighborhood no different from Las Vegas or Bourbon street just a lot dirtier and noisy.

So called "blue laws" also had a good side affect, it made Sunday's the most peaceful day of the week, liquor stores which still are family owned businesses were closed which gave the owners one day off. If the laws continue to change why not let bar's stay open 24/7 to maximized their income? It has become painfully obvious in our neighborhood that nightlife has lowered the quality of life of those that live here. Don't let Albany keep changing this in favor of more liquor related tax income for the state.

Typical. Cuomo and the legislature managed to reach deal on Sunday brunch boozing, but not on ethics reform.

Yes it was. These riduculous laws were passed to cater to religious folks
Sunday is just another day. There shouldnt be any changes in drinking hours. Some of you commentets might be more comfortable in Bible belt states with dry counties. Nice and quiet and no booze.

@8:18am: I think the East Village has been sold out totally by the mayor (current and previous ones) and by Cuomo. This area has been transformed, de facto, into Bourbon Street. The only thing Cuomo forgot to approve was carrying open plastic drink cups full of booze in the streets (but hey, he can still do that, right?)

There is ZERO consideration from any government officials for anyone who might actually be a resident here. The usual refrain is "if you don't like it, move" - except that I was here decades before this alcohol-fueled sell-out situation was here. I'm NOT moving anywhere else and I (and my neighbors) have a right to live in a decent neighborhood, and not just get sold out b/c developers have the gov't in their pockets.

Cuomo, you never get my vote again for any office, anywhere.

Why do you call it a problem? There is no driving involved. This is progressive liberal NYC in 2016. Labelling and judging people is for intolerant right wingers. If I want to drink at 10am and use the ladies room its none of your business. Alcophobia and alcoshaming is totally uncool.

@5:36pm: You sound like you have an enormous chip on your shoulder.

Alcho-shaming"? LOL, damn right we are! We're shaming the drunks who fuck up our neighborhood, and alcho-shaming is 100% cool & 100% our right.

And WTF does driving have to do with it? NOTHING, that's what. We're tired of staggering drunks, vomiting drunks, pissing drunks, rude drunks, loud drunks, etc.

Based on what I see, there are a whole lot of people who really need to get themselves to an AA meeting.


And realize that NEEDING/WANTING to booze up at 10am on ANY morning of the week is an indication of a serious alcohol problem.

I wasnt referring to vomiting or being rude or acting like a jackass. If the current generation of 20somethings cant handle their booze its not my fault or my problem. Maybe the NYPD should do their jobs and cite/arrest these clowns. Also where did all the Puritans come from? You are demanding peace and quiet and fewer drinking hours- and Im the one who needs to move? You sound like you belong in a quiet suburb.

It's an ineffective and archaic law that doesn't stop people getting drunk on Sundays. Get rid of it.

If you don't like people getting drunk move to a different neighborhood or just put up with it like everyone puts up with you, as is done in society.

@10:47am: "You are demanding peace and quiet and fewer drinking hours- and Im the one who needs to move? You sound like you belong in a quiet suburb."

No, I'm not the one DEMANDING shorter drinking hours; you are DEMANDING longer ones. The law has been on the books for eons.

The need to get tanked so early on any morning is an issue. Tes, I think YOU are the one who should be in the burbs, where declasse early-morning drinking belongs. I'll be right here - my neighborhood, my turf; I'm not going anywhere. I expect to be here long enough to see a lot of the current "gotta get tanked" crowd need treatment for liver problems.