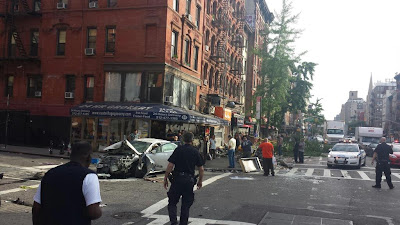 The murder trial started yesterday for Queens resident Shaun Martin, who prosecutors say was drunk and high on PCP when he plowed his car into East Village Farm and Grocery on Second Avenue on June 19, 2013, which led to the death of florist Mohammed Akkas Ali.

"He wasn't just speeding, he was accelerating," Assistant District Attorney Constantine Coritsidis argued in his opening statement in Manhattan Supreme Court, as the Daily News reported.

Martin was reportedly driving 80 mph in a rented white Nissan Altima when hit a fire hydrant, a muni meter and a 25-foot tree, then jumped a curb and smashed into East Village Farm and Grocery at the corner of East Fourth Street. This happened just before 7 a.m., as Ali was finishing his shift. Four other people sustained injuries in the collision.

Ali suffered serious brain trauma and died on Jan. 1, 2014, due to complications from his injuries. He was 63.

The accused killer ... shied away from looking at the harrowing footage of the moment he barreled into Ali.

He buried his face in his hands as the video, a main piece of evidence in the prosecution's case, was played in open court.

Martin, 35, faces up to life in prison for charges that include second-degree murder, aggravated vehicular homicide and first-degree assault.

Martin's attorney, who declined to give an opening statement, also opted for a bench trial. Justice Melissa Jackson will decide Martin's fate.

[Updated] RIP Akkas Ali
Posted by Grieve at 7:57 AM

I missed being a victim of this "accident" by about 12 seconds. Went to the deli to get a couple of beers and was near 5th Street when I heard the crash.

It's too late for regret. Life in prison should be automatic.

Unbelievable what people will put in their bodies.

Walter: Glad you were not hurt.
Anon: Agree completely.
Scuba Diva: You are spot on. People poison themselves willingly in so many sick ways in the name of "fun"...

Hopefully this begins a trend of actually criminally charging people who kill pedestrians/bicyclists with their motor vehicles.

Or will this just be a token trial because the accident was so egregious?