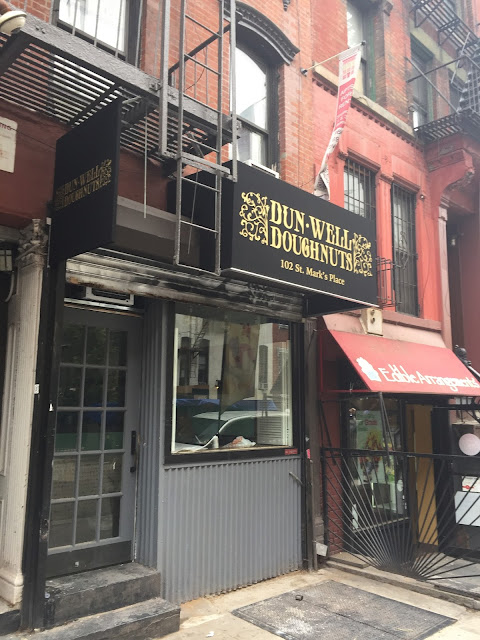 At the beginning of June, we heard that a vegan doughnut shop was opening at 102 St. Mark's Place between Avenue A and First Avenue. We didn't have more info, other than that the baking would be done off-premises.

No word on an opening date here at the space that previously housed New York Macaroni Co. and Puddin'.

Dunbar says the operation will be very similar to their Brooklyn original, with their full lineup of vegan doughnuts and pastries like pull-aparts, which they'll shuttle in daily from Montrose Avenue. "Right now it's a doughnut and coffee shop," according to Dunbar, who hopes to have their ice cream operation at the Manhattan spot at some point, too. Espresso drinks, Brooklyn egg creams, tea and lemonade will all be available at the St. Mark's shop.

An so begins the Billyburghization of the East Village!

I'll try them out. Donuts rule.

Most conventional donuts are not edible to vegans, because they contain both eggs and dairy. (And some are even fried in lard, which might sound good, but to a vegan, all bets are off.) However, there is a vegan secret weapon, called Coconut Bacon, and there are several companies that make it because it's relatively easy—certainly easier than putting a hog in a smoker.

Dun-well—and an increasing number of bakers such as Cake Thieves, Erin McKenna's bakery—formerly known as Babycakes, and the Vegan Divas have been making vegan doughnuts for a relatively long time; Cake Thieves' slogan is even: "We make vegan things that don't taste vegan, because that would be gross."

My big gripe with Dun-Well, and the reason I've never even stopped in is that their oils they use for frying are palm and canola—which are both bad for the environment and bad for you.

Still, I'll admit they're healthier than Krispy Kreme or Dunkin', and some of our readers here might give them a try. I do know they have crazy flavors, and maybe even a maple-bacon one.

This is amazing! When I first moved to NYC, the East Village was the neighborhood for vegan/vegetarian food, not Billyburgh/Bushwick. I have been sad to see vegan places closing; super happy to have Dunwell here nice and close. Milk and eggs would normally be used, but they taste fine/normal without.

Hey EV Grieve what's with not clearing my post about how vegan donuts aren't really donuts? Let me know when SD doesn't have a hold on your balls.

Scuba Diva, with all due respect, you've griped that there aren't enough places for vegan desserts before, and now you're griping that this donut place, which is vegan, isn't healthy enough. I guess I just wonder what drives your veganism. As you know, we veg/ans already get a lot of hassles for our perceived high-maintenance (e.g., "How do you know if someone is a vegan? Answer: Don't worry, they'll f*cking tell you" womp womp), which I think is unfair in most cases, but you do seem to be kind of demanding about things that I would personally consider unimportant/non-essentials (ice cream, macarons, donuts) when making an ethical choice of what to consume. But maybe the choice is not about animals for you? I'm genuinely curious.

Um, yes. There are donuts made with dairy products. You may want to stick with Dunkin Donuts if you're up for vegan donuts. More for the rest of us.