Looks like the end for TakeMeHome Rotisserie Chicken on Avenue A 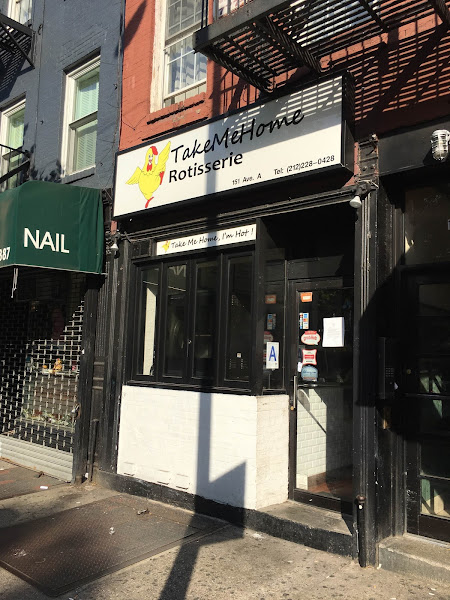 The quick-serve restaurant at 151 Avenue A between East Ninth Street and East 10th Street kept irregular hours in recent months. It was closed for roughly two weeks, then open again for one night, and so on.

Now it appears TakeMeHome has served its last chicken. Legal documents arrived on the door last week... with a Rent Demand for the sum of $29,277.70 (the "arrears"). 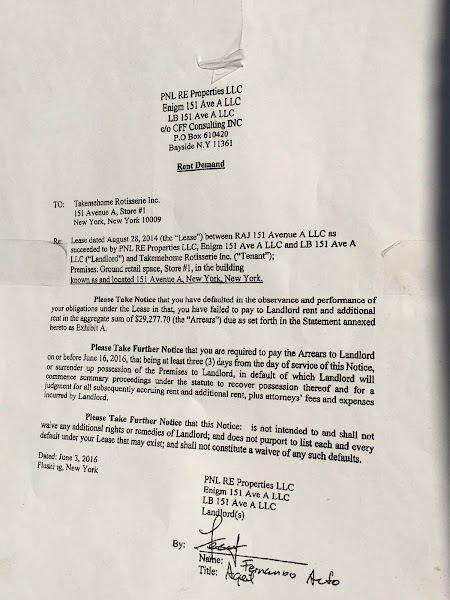 As we said in previous posts, people we talked with generally liked the food here — large portions for the price. But it never could sustain any business.

TakeMeHome opened in November 2014. The space was previously home to San Loco.
Posted by Grieve at 4:12 AM

Looks like the end for a lot of places. What small business can afford the ever increasing rents down here? Best of luck to "Take me home"

San Loco: Afraid of opening a location west of Broadway since 1986 LOL.

San Loco was there for, what, how many years?

I don't want to sound like a monster because I realize this is a real person's small business that is closing, but I am not going to miss that nightmarish signage. It was like this classic SNL commercial come to life.

Nightmarish? It was small, wasn't reflective, didn't change colors or have kindergarten lettering, what was so awful about it?

I never saw more than a few chickens in the window, and never a customer. Even if their rent was reasonable, they couldn't have stayed in business. Surprised they lasted as long as they did.

@6:40 you answered your own question, kick them when they are down, not nice.

7:50 it's an amateurishly designed, plasticky, ugly-ass sign. I'm not asking for high-end signage, I prefer the classic and understated handpainted ones, but this thing was hideous.

9:24 I didn't ask a question. You know what else isn't nice, though, while I'm here? Eating chickens.

"what was so awful about it"

1. The chicken is a crotch-flashing pervert.
2. The 'TakeMeHome' font came pre-installed on computers made in 1984.
3. 'TakeMeHome' is not one word.
4. The phone number is so small it may as well read 'Don't even THINK of calling here.'
5. The chicken appears on a duplicate sign, again flashing his crotch like a freak, this time with a lewd remark about taking him home. No thanks!
6. There seems to be some confusion among the signs to whether this place is called 'TakeMeHome' or 'Take Me Home.'
7. The garish signs were meant to distract us from the empty window indicating this was probably a front.

Really, I could go on all day

I saw them dump chicken grease into the street drain... never went inside the place after that

Love a good chicken indeed. My favorites are Mancora Peruvian and Taqueria Diana. But my rule in life... don't patronize whole chicken and sushi joints that are empty. Rarely saw customers here.

Uh, the food here sucked and the owner basically opened whenever they pleased. While the chicken wasn't awful, the sides were worse than frozen packages from the grocery store.

Looks to me like the chicken was giving the Nazi salute.

Clearly the chicken will vote for Trump.

6:26am San Loco was there for I think at least ten years.

Dumbest ownership. Let's have two locations in the East Village but not one in Greenwich Village.