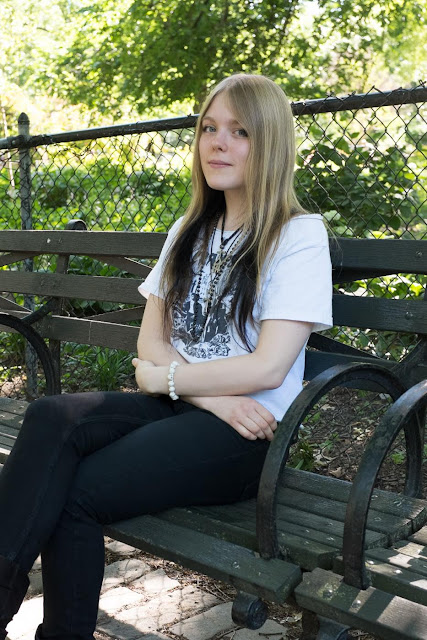 I was born and raised here: first near the Bowery, but I later moved further into the Lower East Side. My mom is from Syracuse and my dad is from Queens and Long Island. They moved to NYC in the early 1980s. I guess my dad always knew that he was meant to be in Manhattan, so he just had this drive to move here eventually. That was his goal.

Growing up in NYC was kind of fun and carefree. Most of my time was spent in the Tompkins playgrounds and the surrounding areas. I remember there were always a lot of strange characters around here. My dad would often point them out. He would say, ‘That kind of thing only happens here,’ or ‘only in New York.’ Living here, you'd learn to be more loving and accepting toward people, instead of hating or being afraid of people just because they look or act differently.

I was always into the punk aesthetic from a young age, and I liked that sort of music, but I didn’t know of any really good bands. Then in my late teens, I started doing more research and finding more genuine punk and rock 'n roll bands, like the real dank shit. Ramones, Misfits, the Clash, the Cramps, Johnny Thunders & the Heartbreakers, Richard Hell & the Voidoids, Leftover Crack...

Even as a kid, I heard about CBGBs and I always kind of fantasized about being able to go to shows there. In 2006, I think I was 12 or 13 so I was too young to even go to the matinee shows, and that was when they shut down. My little dream was crushed right there.

When I was little, there were still a lot of empty lots, a lot of garages, a lot of parking lots, empty spaces that didn’t have nasty glassy towers built on them. What really makes me go into this mental disconnect, is that so much is changing, faster than ever before, and its kind of heartbreaking sometimes. It’s hard to develop or maintain a sense of place when your surroundings are always looking different from month to month. What you knew and loved about your neighborhood — the familiar sights and imperfections — is being steadily destroyed and replaced.

One of the things I love most about New York City is that you can be anyone you want to be here. Everyone will accept you. That’s how it should be and that’s how it’s always been. If you want to reinvent yourself, go for it. That’s kind of a punk thing, too. You can be true to yourself and not have people judging you... and if they do, who the hell cares? Embracing punk music and ideologies has helped a lot in my life transition.

I studied wildlife biology in college. I was extremely depressed, anxious, and isolated, repeating endless cycles. It felt like being in prison. After a couple of years, I realized that no one really listens to scientists anymore. I began to question the system I was conforming to. Graduating high school, finishing college, getting a degree in some field, and hopefully getting a job... That's not realistic. It doesn't work for everyone. I really wanted to save natural places and wildlife — especially wolves and other predators.

I realized that there’s just so much corruption in politics that you can’t really do much as a scientist anymore. You might publish a study but no one really pays attention to it. Our global environment and ecosystems wouldn't be in such a mess if people in power would listen to the scientists or even common sense, for that matter. They only listen to the money. So, what’s the point of spending more than four years of my life studying and doing this work if it’s not even going to make a difference?


In part 2 next week, Pwakah discusses launching her zine. "With Time Warp, I am trying to inspire people to act and actually do something instead of just being sad and resigned to the situation we’re in." (Find a PDF of the zine here.)

Smart and cynical, I love this kid.

She gives me hope. Anyone smart doing a cool fun 'zine instead of walking around here just complaining is an inspiration. Where can you buy the zine? (Hmmm...maybe I should click on the other link...)

This is a very interesting young woman.
Kudos!

Physical copies of Time Warp are available at East Village Books (99 St. Marks Place) and a couple of other locations... More information is listed on our facebook page.

Great interview...
I love this: "The streets are swarming with zombie-like people. It's like something outta the Twilight Zone."

All the kids who grew up on the LES are like this. That is, if they can nip their parents' proclivities to outsource their children to outer district schools.

Just fantastic - what an amazing, thinking human. I look forward to the second part. Good for you, Colette!

EV Grieve, this young lady gets it. I think you've met your heir.

makes me sad that even someone this young is discouraged by the direction the neighborhood has taken....