Report: Steve Croman due back in court today

In May, Croman of 9300 Realty was hit with a 20-count indictment on charges including grand larceny and filing false documents ... as well as a civil suit via the New York state Attorney General's office. He faces up to 25 years in prison. Croman pleaded not guilty to the criminal charges. Per the article: "The civil suit is seeking to strip him of his real-estate business entirely and force him to pay millions of dollars in fines and restitution to tenants."

The Vanity Fair piece notes the "fever dream" pace at which the Cromans — Steve and wife Harriet — live on the Upper East Side and in the Hamptons. "They feted their son with a bar mitzvah under the whale at the Museum of Natural History, at which pop star Ariana Grande sang a tune for the crowd."

Croman, 49, has hired Ben Brafman, "the famed attorney who is also representing the so-called 'pharma bro' Martin Shkreli in his securities-fraud case." They are due in court this morning.

Brafman told Vanity Fair that they are "working diligently in the hope of ‎reaching a global agreement with the Attorney General that will resolve both the civil and criminal cases" against Croman.

Tuesday, June 21st, at 9.15 am sharp, please join some of Steve Croman's tenants as they meet and greet their indicted, disgraced landlord in front of 100 Centre Street. Steve will be heading to the Criminal Court on the 13th floor immediately after. 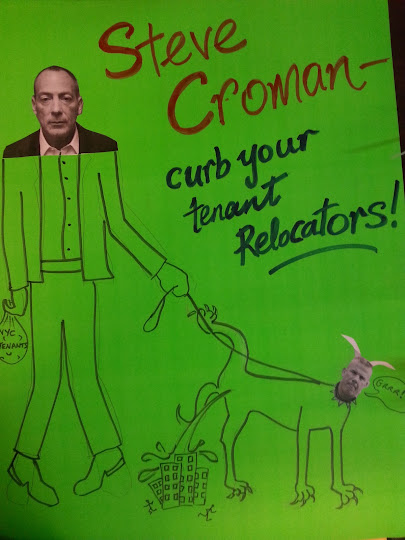 He looks tired in his mug shot... guess its exhausting being an asshole.

I hope they convict

This is just like the olde days when the whole town came out to shame a criminal (I know innocent until proven guilty)....

If Croman evicts, you must convict.

Did anyone get any pics from this morning down on Centre St?

It's not just Croman alone that needs to be brought to justice, it's also his equally guilty wife HARRIET KAHAN CROMAN who is as corrupt as he is, if not moreso.

Then there are their gutter girl property managers... Annabelle, Janeth, Laurie, Angela, Deborah, Liz who are as bad as his tenant relocator Anthony Falconite and Croman's front man, Oren G. What a freak show and the lowest forms of society.

May Schneiderman go after each and every one of them....every dog has their day and their Karma awaits all of them.

Well Steve...The shoes now on the other foot - How does it feel?

Now you know what it feels like to be mercilessly dragged to court
in the same inhumane way you have ruthlessly and repeatedly dragged hundreds of your tenants to court over all these years.