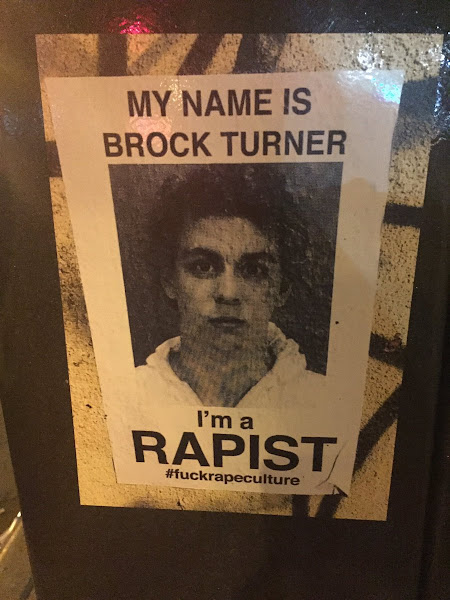 Slum Goddess passes along word that the above flyers, like this one on Second Avenue near East Houston, are starting to show up around the neighborhood.

Brock Turner, a former Stanford student and member of the swim team, was sentenced earlier this month to six months in jail for raping an intoxicated and unconscious woman behind a dumpster at a fraternity party in January 2015. Turner faced a maximum of 14 years in state prison.

The story has prompted outrage for many reasons, including the lenient sentence handed down by Judge Aaron Persky, who said he feared a longer term behind bars would have a "severe impact" on Turner.

Gothamist has coverage from the event here. A similar Brock Turner rapist flyer was spotted outside the venue, Holyrad Studio.
Posted by Grieve at 9:00 PM

Email ThisBlogThis!Share to TwitterShare to FacebookShare to Pinterest
Labels: Brock Turner, signs around the East Village

Are people outside of CA aware how lenient they are? I know someone who had their car stolen. The person served 6 weeks in the county jail. Google Prop 47 and AB 109. Its very difficult to get real prison time in CA.

Nashville got it right with the Vanderbilt scumbag.

I am convinced Persky was paid off to give that joke of a "sentence" to Turner.

Also, the judge based his sentence on the recommendations of the Parole Department.
http://www.mercurynews.com/ci_30022489/d

Also, included in Brock Turner's sentence is the rest of his life on the sex offender registry.
If anyone thinks that is lenient, read this
Sex Offender Registration: Driven by Fear or Real Risk?
By Jessica DaSilva
www.bna.com/sex-offender-registration-n57982074168/

Anonymous 10:22—I'm not reading the links unless you learn how to make a clickable link—you sound as if the woman Brock Turner raped doesn't even figure in this. Don't you think she'll have lifelong damage from this? I do.

@Scubadiva I said nothing about Jane Doe. I too was a victim of sexual violence, and I don't wish that fate on anyone. What Brock Turner did was deplorable. But removing the judge will just make matters worse.

Also, the judge based his sentence on the recommendations of the Parole Department.

Also, included in Brock Turner's sentence is the rest of his life on the sex offender registry.
If anyone thinks that is lenient, read this:
Sex Offender Registration: Driven by Fear or Real Risk? By Jessica DaSilva

Removing the judge would mean replacing him with a judge who most likely won't sentence someone convicted of rape to a couple of months because the rapist is white, male, well to do financially, and a Stanford student like him.