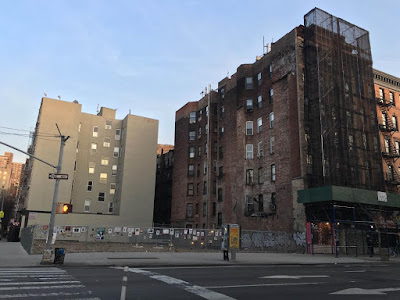 The suit, filed Tuesday in Manhattan Supreme Court, alleges the city and Con Edison, along with the owners of the restaurant Sushi Park and contractor Neighborhood Construction Corp., failed “to observe significant and dangerous ‘red flags’ … failing to take any steps to protect the public and their property.”

The Daily News article mostly focuses on actress Drea de Matteo, who lived for 22 years at 123 Second Ave., one of the three buildings destroyed in the blast.

In April, the estate of Nicholas Figueroa filed a wrong death lawsuit. (The Daily News notes that there have been dozens of lawsuits filed regarding the explosion.)

Authorities have said that siphoned gas at 121 Second Ave. is to blame for the explosion, which killed Figueroa and Moises Ismael Locón Yac and injured two dozen other people.

They should be suing for a lot more, 17M should be what they are settling for EACH ... I wish them luck, this is going to be a long road for them

They're suing the city and con ed, not the landlord, which is bullshit.

Again, people making judgments without knowing the correct information, which is bullshit.

Yeah, are they allowing Maria Hrynenko to self-certify with her "I'm a good person" bullshit? Where is that woman, anyway?

In not suing the owners, I'd guess they have very astute lawyers. The Hrynenkos won't have anything left especially if they're rotting in jail (wishful thinking?). The city and ConEd will settle. As a long time patron of the restaurant, feel bad for them being sued.

They shouldn't be suing the sushi restaurant. That sounds like a greasy lawyer looking for a payout where ever they can stick their vampire blood funnel.

You can't blame the sushi restaurant for the complete 'cover up' by the landlord of siphon illegal gas. The restaurant is as much a victim of the landlord as the residents.