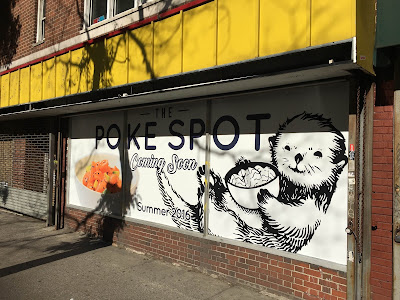 There's a taker for the corner space on 4th Avenue and 12th Street that previously housed the Subway (sandwich shop) until late January.

Otter signage has arrived for The PokéSpot.

Earlier this year, Gothamist noted that "New York City is in the midst of poke-sanity," with several newcomers ready to serve up the dish.

And just what is poke or poké (pronounced poh-kay)?

In the simplest terms, it's a raw fish salad, similar to a tartare or even ceviche, though poke is typically less acidic. Raw tuna, typically, is marinated in soy sauce and sesame oil then tossed with onions, jalapenos and wasabi, for example, though the combinations are myriad. Regardless of the protein source, another poke standout is the cubed shape of the meat, as the word comes from the Hawaiian for "to slice or cut."?

The signage includes a poke shot... though it really doesn't look so delicious in the morning sun... 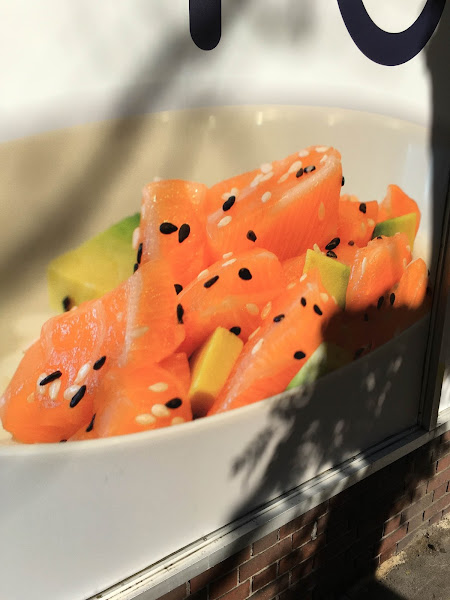 Several other East Village restaurants serve up poke, such as Mother of Pearl on Avenue A and Noreetuh on First Avenue.
Posted by Grieve at 4:14 AM

Now I know what was missing in my life. Poke me.

Wonder how long it'll last? Are there really that many customers for that, esp. when it's not summer?

This is going to do really well. It's already taken over LA and people love it.

This almost makes me miss the Red and Gold Boiil spot on St. Marks place where you could eat lobster covered in butter out of a plastic bag with your hands. I said almost.

Bunch of so-called New Yorkers blanching at the idea of eating raw fish. What the hell is going on here and when did New Yorkers become so provincial.

When did New Yorkers become so provincial? Right around the time they started referring to themselves as New Yorkers and everyone who wasn't as being mouth-breathing heathen that should slither back to flyover country.

I would call the idea of eating raw fish provincial, rather than the other way around. I would like to think that things that take over L.A. do not necessarily fly here, but alas that thought passed decades ago.