Caffe Bene temporarily closes on Avenue A to expand its menu 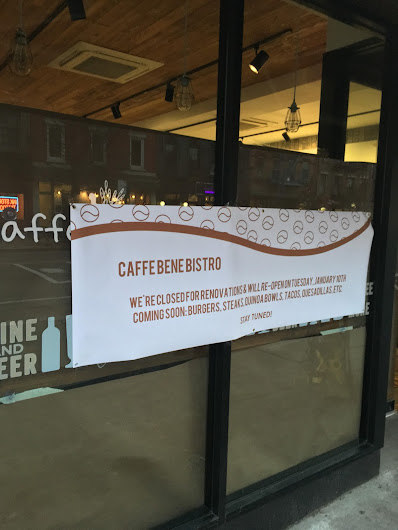 Several EVG readers noted that brown paper went up in the windows at Caffe Bene on Avenue A at 13th Street.

Said one neighbor: "Sounds like they're shifting to a menu that'll cater more to late-night drinkers than the cell phone and laptop crowd."

This Caffe Bene location does have a beer-wine license. It opened here in late 2015... the coffeehouse chain is based in Seoul, South Korea. The previous menu for this Caffe Bene shows items including avocado toast, yogurt bowls, waffles and soups ... as well as a variety of coffee drinks.

Brewing Soon signage arrives for Caffe Bene on Avenue A
Posted by Grieve at 4:22 AM

I've been a vegetarian for 20+ years so maybe I don't know but are people really going to order and eat steak at a crowded coffee shop?

Speaking of which, I was one of the people not really opposed to this franchise, because it seemed to be staffed and frequented by neighborhood kids/people and did seem warmer and more neighborly than a corporate Starbucks. And I was happy to see that they had vegetarian foods in their cold cases and a lot of nice salads. But the markup on this stuff was INSANE. A couple of times when I was working at home, I'd go there to get some food, snacks, coffee (it's very close to my apt), but I'd be spending well upward of $20 for stuff that should cost maybe $10-12 at most. So if they're changing their menu because no one bought the healthy food, maybe they shouldn't have charged $7.99 for the same vegetarian chicken salad or cold soba noodles that cost $4 at the health food store.

1) The previous menu is still in full effect - we'll still have yogurt, acai & pitaya bowls, avocado toast, waffles & soups.
2) We're adding a menu through which we can attract more of a crowd in the evening. We close at 11PM on most nights and midnight on the others so it's very tough for us to cater to "late-night drinkers"

3) I got Martinez' blessings from Zaragoza, he even gave me a few pointers on how to make some delicious tacos. I'm not trying to compete with him by any means.
4) Re: the vegetarian chicken salads, they'll still be here just like everything before the renovations. And the price for all the Natural Corner items (veggie chicken, soba noodles, etc.) is $5.99! The wholesale price for those items is $4.00 so a 33% gross margin, I think, is extremely fair once you consider the other costs of running a business.

I hope to see you all when we re-open! Please mention this comment and your first order is on me :)

A 'should read' if you want to know about the restaurant business.

https://www.thrillist.com/eat/nation/american-restaurant-industry-bubble-burst There's a Massive Restaurant Industry Bubble, and It's About to Burst

It is a three parter, but this one gets at the heart of it.

@7:47AM I'm a vegetarian too (since I was 12 years old) and I still remember with horror Tad's Steaks -- they were a chain that flame-broiled thin strips of cheap meat on a giant grill with foot high flames in their window,-- and it was basically a coffee shop that served steaks to the masses. Unfortunately, Millennials seem to have grown up on a meat rich diet of bacon and beef and pork, and they still eat it in unhealthy proportions. They even consume packaged meats at twice the rate of Baby Boomers, which is even least healthy. I blame the meat heavy and artery-clogging Atkins Diet fad, which their parents probably raised them on. In spite of all of the vegans and vegetarians out there, 95% of Millennials still eat meat, which indicates that Darwin's theory of evolution is now running in reverse.

I like Cafe Bene, but what I don't like is the idea of sipping a coffee with the smell of burgers and steaks cooking on a grill. Hopefully they wont smell like Tad's Steaks. I also hope the prepare the meatless dishes separately, but in such a small space I wonder how that will be possible.

@10:44AM Thanks for that Thrillist article, it's a must read to understand how crazy the restaurant business is, The bottom line: everyone wants to be a celebrity chef, and as soon as one concept becomes a hit the market is flooded with copycat restaurants. And noone except for the lucky few are making any money due to high labor, rent and food costs.

Now that many of the better restaurants are closing down, we can look forward to lots of fast casual counter service joints (I still miss Horn and Hardart where you put coins in a slot to get you food from a little window), and apps that deliver cooked meals from anonymous "caterers" or sometimes even from people's home kitchens. Once again, venture capitalists are putting an entire industry out of business.

But the best part o the article was this, which sums up the East Village perfectly:

"One of the unintended consequences of the Golden Age of Restaurants was unreasonable customer expectations for virtually every eating experience. "Customers now think life should be one endless brunch," says New Orleans' chef Cullen. "With freshly made bottomless mimosas."

I'll drink to that!

To me the crime of the century was John's offering a vegan option and putting it up on their awning. But, I get that if your a vegan you might now want to smell a burger cooking. From what I remember, Cafe Bene didn't have a grill and they microwaved everything but I could be wrong about that.

I was so excited to make this my go-to cafe when it first opened, but I finally gave up on it a few months ago. I like most of the staff, but there are some people who don't know what they are doing. I ordered a hot chocolate once, and they gave me coffee, and I went back up and returned it, and they gave me coffee again! And the tables and chairs don't work together. The tables are really low, and it isn't comfortable to sit there. They really need to address the seating situation. The table and chairs were clearly bought separately. They need to buy table and chair sets where the chairs are made to work with the tables.

@Rish ... thanks for chiming in here so cordially!

We are big fans of Rish, his staff, and the customers at his cafe. If we weren't in SF we'd be there drinking some vino and catching up on emails right now. Good luck with the renovations and menu updates. Thanks for your hospawtality ��

That place sucks. Why would anyone go to this generic chain over here? I went in once only because my friend had me meet him there and had a gross avocado toast with avocado squeezed from a bag.