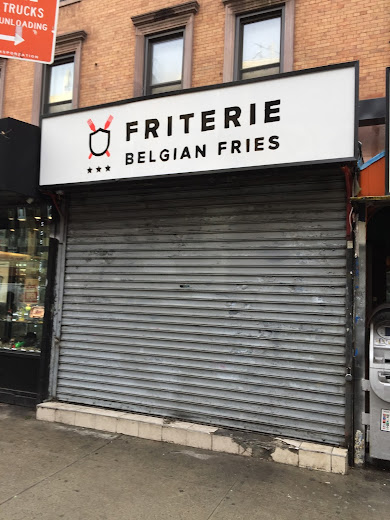 The gate was down during business hours yesterday afternoon at Friterie Belgian Fries, 36 St. Mark's Place.

A man putting a lock on the gate told EVG correspondent Steven that the business was done. Calls to the shop between Second Avenue and Third Avenue are directed to a message noting that this customer hasn't set up a voicemail box.

Meanwhile, the business that shares the address, Topoo Village Gifts (Best Head Shop in 2012 per the Voice) cleared out back in the summer. That space now has a for rent sign... 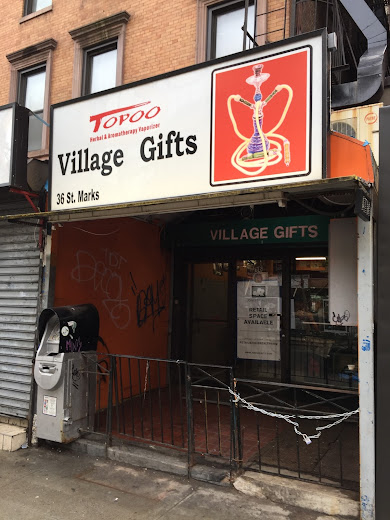 Friterie Belgian Fries opened in June 2015 ... in an attempt to fill the void after Pommes Frites was lost in the deadly Second Avenue gas explosion on March 26, 2015. (Pommes Frites reopened last May on MacDougal Street.)

Not surprised - both the food and the service at the frites place was awful.

It fascinates me that outside of EV Grieve there are no news organizations writing about constant turnover of businesses in the East Village. I suppose this is considered just a sign of the times and NYC the birthplace of the American dream of opening a business, and pursuing your American dream (yes that includes you Marshmallow shop) has become impossible. It's likely many new businesses fail from lack of experience and a poor concept but the numbers are staggering (2 month to best 2 years) lifespans.

This was an awful place that tried to latch itself onto the Belgian fries store that left second avenue after the explosion and fire. I know that some people will blame blood sucking landboards and their rents. But it seems to me as wave after wave of stories such as this close down, the fault must also lie with the owners who are poor planners, have too much money to burn, or want an east village shop on their resume. I wish when EV Grieve posts about these one item shops, someone would take the time to cut through the hype of Facebook and ask some real hard questions.

The fries weren't very good.
The music was always so loud you had to shout your order.
It's probably too big of a space for that kind of business.

I never saw any lines or crowds in there, and it seemed like it belonged more in Coney Island than on St. Marks Place. Even the tourists knew this wasnt the real thing. Meanwhile the original Pomme Frites is thriving in the West Village, and the frites and sauces are are great as always.

This place was great when it first opened. They had wonderful staff and the fries were always hot and made to order. Then it slowly declined and they replaced the bubbly, ready-to-serve staff with rude, lazy staff that couldn't take your order unless you've been standing there staring at them for at least 5 minutes. The fries started to get soggy and all the effort flew out the window.

There was nothing wrong with the idea of selling fries. The shop on 2d Ave always had lines. The fries at Friterie were very good when they opened, but then they took a nosedive. Reheated fries are NEVER going to taste very good. You could tell they were not long for this world.

Most of these new shops have owners that want to open something the have wanted to open all their lives and don't research the neighborhood to see if there are similar places that would siphon away business. Many have poor business models. Some are completely brainless like opening a frozen yougurt place in December and hoping to stay alive till the summer when someone actually buys the stuff. Sure rents are high, but they are pretty much the same per sq/ft for the businesses that thrive.

Went here once and service was awful - took twice as look as it should have to even place an order. For a place with one product, that's laughable.

The original frites place on 2nd Avenue (RIP) had a quaintness to it, and engendered a certain degree of love, while this place that just closed had all the ambiance of a 99 cent slice joint...