Last look at the old Lanza's 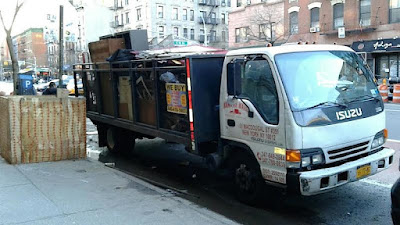 As we noted yesterday afternoon, workers were clearing out the remains of the former Lanza's space on First Avenue between 10th Street and 11th Street.

A few things were placed out on the sidewalk for free, such as some work pants... 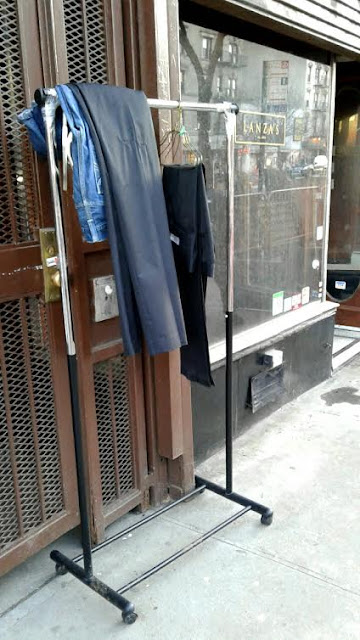 EVG reader Lola Sáenz got a look inside the now (almost completely) empty Lanza's, which had been serving Italian cuisine here since 1904... 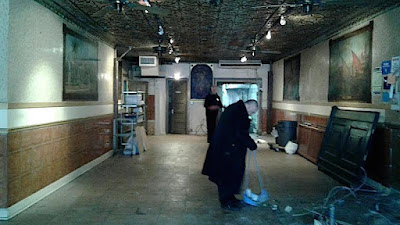 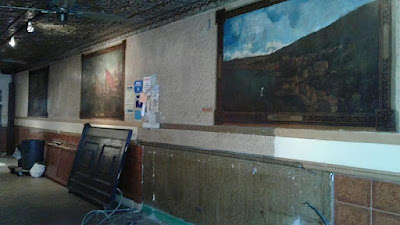 To date, there haven't been any permits filed with the DOB to renovate this space for incoming tenant Joe & Pat's, the pizzeria that has been serving up slices on Victory Boulevard in Staten Island since 1960.

Casey Pappalardo, one of the pizzeria's owners, told the Staten Island Advance that the family had been looking to open a location in Manhattan for a long time. "We were looking in the city for a while and then our neighbor actually approached us because he owns the building," he said.

And an opening date?

"We should open within six months," Casey prognosticates, adding with a chuckle, "That's if all goes well — there's always some setbacks."

Lanza's closed for good back in July after the state seized the restaurant.
Posted by Grieve at 4:20 AM

Maybe some of what's left in the space can be incorporated into what is to come; from the photos, it looks like some of it could work in a pizza spot.

They should clean those old mural paintings on the wall and keep them. What a great look!

I hope they don't lose the ceiling and the murals. Come on. It was a classic...they ought to get that. Don't turn it into another generic pizza joint! We have plenty of those.

Sorry, tear it all out. Let whoever rents / buys this space start anew and make their own tradition.

After my parents divorce my mother and I moved to East 10th Street. Lanza's was right around the corner. I was not yet a teenager and asked my mother if we could go there for Italian. I probably wanted spaghetti or lasagna. She said no, we probably wouldn't be welcome. She said the men who ate there we with the mob. Thinking back she was probably right.

The staff at Lanza's were very good to my parents. If anyone knows where Mohammed the waiter is working please post it.

I think the new owners will be smart enough to recognize what's good about the bare bones of Lanza's, embrace it, and make it their own. Here's hoping!

Sorry, leave it alone, 12:20pm, considering whoever the new tenant will 1. most likely create something lame and 2. not last more than a year or two or three thus.

I would like to take this opportunity to thank all of you have shown interested in our former establishment. Our founder V.Michele Lanza came to this country in the late eighteen hundreds with nothing more than a vision, in 1904 he established Lanza's Restaurant. Over many decades he and his sons worked tirelessly to maintain a successful business and meet the challenges of an ever-changing community. In the 1990s after the last of the family members active in the business passed on or retired. Our Family Legacy was placed into what we thought to be capable hands, unfortunately in a fraction of its existence this venerable establishment was plummeted by poor management. We unfortunately can not repair the damage done to our grandfathers legacy. We are proud of his accomplishments but saddened by the loss, we feel privileged to have been part of the rich culture if the east village for so many decades. Hopefully the successor we have chosen with fresh ideas will be a complement to the area.

Yes! I hope they do. Those murals go way back.

They were painted in 1920 by Frank Azner

The murals were done 1920 Frank Azner