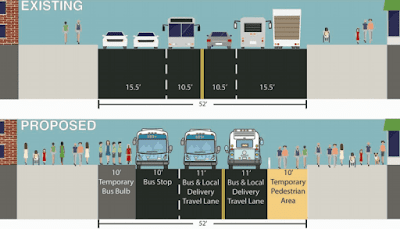 The fate of 14th Street during the L-train shutdown starting next April has apparently been decided.

As the Daily News first reported, the city will limit car traffic on 14th Street from 5 a.m. to 10 p.m., seven days a week.

A few other details:

The city Department of Transportation ... will also change its plans for a bike lane. There will now be two one-way bike paths on 12th and 13th Sts., instead of a single two-way path on 13th St., officials said, so fewer parking spots on 13th St. will be eliminated. A DOT official said that the new design with two bike lanes would handle the higher cyclist traffic better, with easier pick up and drop-offs on the south curbs.

Manhattan residents will also be able to use 14th St. for pickups and dropoffs only.

You can read more about this at Gothamist.

Can't wait to see the ruckus raised when the first person who lives on 14th Street and owns a car tries to drive up to his door during the "restricted hours for cars" and attempt to drop off or pick up his/her elderly parent, infant or air conditioner.

Bus lane mania is all well and good but connecting people from one side of the river to the other is still the nightmare.

This is a joke. First of all, nothing changes east of 3rd Avenue or west of 9th Ave. Local residents can still make pickups and dropoff on 14th Street on the “Busway” Avenues, and this will be enforced by traffic cameras which means you will have tons of cars turning onto 14th Street, going a block or two, then clogging all the sidestreets with more traffic, and drivers from New Jersey and Long Island who will just ignore the signs. I don't see any restrictions on taxis or Uber cars from doing pickups and drop offs, so we will still be tons of traffic on 14th Street, and the city can make money off all the additional ticket that will be issued.

Wasn't this the plan they offered in the first place, the only difference was to nix that stupid 2-way bike lane.

This proves the MTA and even the DOT are run by morons. They have no plan. This is the result of REBNY dictating policy and city planning. They built all this tower pestilence in the city and in the now and still inexplicable tony hip towns of Greenpoint, Bushwick and Williamsburg and now those commuters are basically fucked. And those cretins are not going to take a bus. Expect Uber and Lyft rides to explode and the inevitability of more app-based services.

The L shutdown, though only for a year, is the equivalent of preparing for a nuclear attack, except this is certain.

9 minutes to midnight for the MTA and commuters.

Oh, yeah, fuck up 12th Street with a bike lane, too! That's a nice area (or will be until the bike lane).

I'll be outta here sooner rather than later! Nobody - not even the MTA - seems to know how bad this L shutdown will be, but IMO it's gonna be worse than anyone is predicting.

What the MTA has not and never does factor into it’s construction planning is what happens to all of this diverted passengers when a subway line breaks down? Many lines are already at or over capacity already, now add thousanda more people using each line along with an unexpected train breakdown, and you have utter chaos. It was better to have left one of the tracks open and then done the other one afterwards. In spite of all the extra time it would take to finish the tunnel and station reconstruction, that’s nothing compared to the utter havoc and delays that will be inflicted on countless passengers every single time this already fragile system breaks down, as it always does.