Another 'Star Spangled' cheer for health-care workers on 7th Street 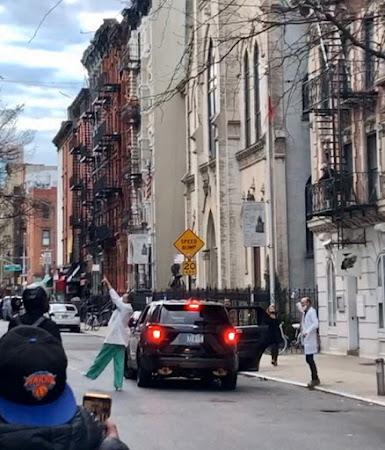 Once again tonight, the #ClapBecauseWeCare cheer for health-care workers and first responders featured an electrified "Star Spangled Banner" here on Seventh Street between Avenue A and First Avenue.

And there were two special guests: two off-duty ER doctors from Albert Einstein College of Medicine in the Bronx who drove up via a police escort. (They had seen the previous night's video.)

Email ThisBlogThis!Share to TwitterShare to FacebookShare to Pinterest
Labels: Coronavirus

I love 7th street...always fun stuff going on on that block and some real characters. I really hope all the stores can open back up in time.

Can we get applause for the people that are working inside supermarkets too ??