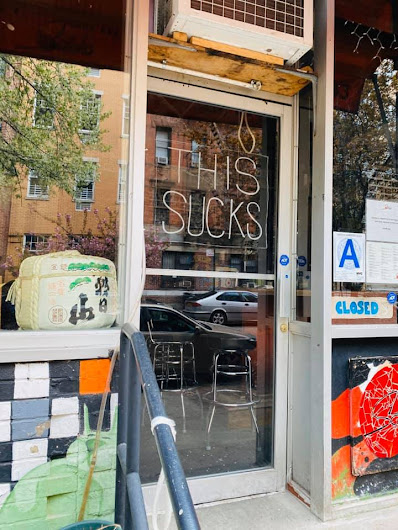 • New data shows that Hispanic and black New Yorkers are dying from COVID-19 at higher rates than other racial groups (Gothamist ... the City)

• ProPublica, the nonprofit newsroom, has a coronavirus tracker that compares positive cases in the city by zip code. As of April 10, 348 of the 782 people tested in the 10009 zip code have had a positive result, which is 44 percent less than the NYC average. Find the tracker here.

• Elizabeth Blackwell, NYC's first female medical doctor — not to mention the first woman to practice medicine in the entire country — opened her clinic in this neighborhood (Ephemeral New York)

• A tour of what's still open in Chinatown (Eater)

• How Christo and Amelia are faring this week (Laura Goggin Photography)

• 12 classic books about the East Village and Greenwich Village (Off the Grid) Looking for a book? You can still order online at Third Street's Book Club (Official site)

• "Never Rarely Sometimes Always," which some critics are calling the best film of the year, had an abbreviated run at the Angelika. It's now available to stream. (Reviews: Artforum... AV Club)

While you were stay(ing)-at-home, these nearly 900 glassines packed with heroin were bound for our #EastVillage streets. Luckily they never made it!—thanks to the sharp eyes 👀 of our Field Intelligence Sergeant and Anti-Crime Team. #NYPDProtecting pic.twitter.com/xbUu25ipfW

When thanks are due... Thank you 9th precinct for this.

RIP, Mr. Albanese. I have loved your store and your meat product for decades, I hope I can continue to do so in the future. You will be missed sorely. Condolences to your family, but I am happy with you are once again with your loved ones who have gone before.

Thank you, EVG, for always sharing the updates about our Tompkins hawks! Since the time of my last post (above), there has been a hatch!

Glad the 9th Precinct was able to keep this heroin off the street. Good work!