The frequency of the M14A 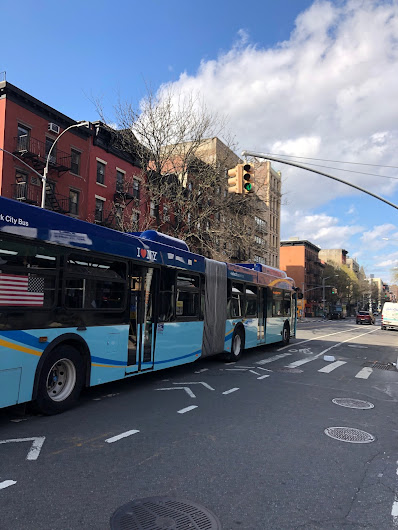 An EVG reader, working from home like many other residents, noted just how often the M14A is running in recent days — especially in the morning. The reader's desk is against a window overlooking Avenue A, where she has a prime view of the buses on its northbound and southbound routes.

Yesterday morning between 10 and 11, she noted the bus going in each direction 14 to 16 times — so, doing the math, roughly less than four minutes apart. In several instances, the buses were 1 minute from each other during the hour.

With the aerial view, however, the reader could not ascertain how many passengers might be on each bus. (As Curbed reported Monday, bus ridership is down more than 70 percent compared to the same time last year.)

According to the MTA, "buses are operating on a reduced schedule because of decreased crew availability [and are] strategically supplementing some bus service to help prevent overcrowding."

Given the frequency along Avenue A, overcrowding won't be an issue.

The MTA previously initiated a new rear-door boarding policy to keep riders and operators at a safe distance during the COVID-19 crisis.
Posted by Grieve at 5:20 AM

Email ThisBlogThis!Share to TwitterShare to FacebookShare to Pinterest
Labels: M14A

That observer should try checking it out at 9:30 or 10 at night, when I have, on multiple occasions since the busway began, had to wait as much as 20 minutes for ANY bus to arrive.

They run too frequently during the day and not enough at night. Either way, I really wish someone would keep track of who's paying and who isn't because in my observations recently people seem to think the bus is free.

@ 2:14 pm -- Apropos paying -- I have always, always paid my fare...until the last week. All buses are free except the SBS service, and I feel like an idiot paying that fare. I feel like I am the only person paying. I've told myself, "you're not the kind of person who cheats on fares" but I'm almost embarrassed to pay; I feel like a chump.
End of confession.

Funny, I feel completely the opposite. I take my nightly walks along A, and I'm amazed by the constant flow of totally empty 14A buses running in both directions. In a span of about 45 minutes, around 11pm to 1am, I count over a dozen buses in total. And it's going on for weeks now.

Btw, same with M15 on 1st Ave. Never in my NYC life have I seen it comes that frequently at nights as it does now. And again, always empty.

I bet the bus drivers are running some kind of overtime scheme, to increase their paychecks.

Tuesday evening I saw a couple cops get on the bus at Ave A/13th to do a ticket check. There were only 3 people riding the bus.