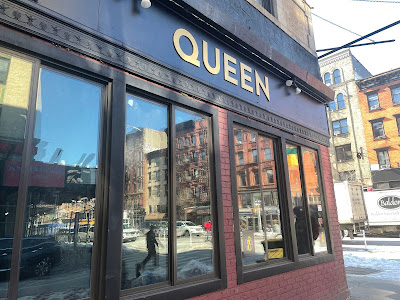 In a battle for the crown, Vic has apparently lost out... an EVG reader shared this photo from Second Avenue and Fourth Street, where the queer-friendly English-style pub Queen Vic is now simply going as Queen.
Queen, from the owners of Boiler Room next door, has not been open since the PAUSE went into effect last March.
Queen Vic opened in September 2010, putting an end to the carousel of bars here, including 2x4, Ambiance and Evolution.
Posted by Grieve at 4:58 AM