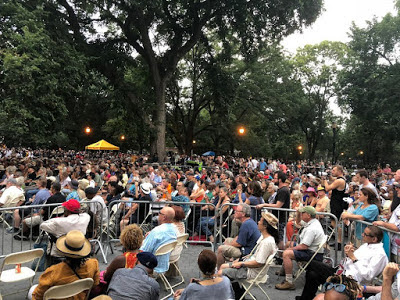 Back on Thursday, SummerStage announced its 2021 season lineup ... with reduced-capacity in-person events returning on June 17. (Ticket requests begin tomorrow at noon.) The shows include the annual Charlie Parker Jazz Festival on Aug. 28-29.
However, unlike in past years, Tompkins Square Park will not be hosting the Sunday portion of the festival. Performances on both days will be in Harlem's Marcus Garvey Park/Richard Rodgers Amphitheater, where it will be easier to support SummerStage's 2021 social-distancing guidelines and ticketing process.
--update--
The shows are FREE. You do need to request a ticket, though. As Gothamist and other media outlets reported, there are also some shows, all in Central Park, that will serve as a benefit where there is a cost for tickets, including George Clinton & Parliament-Funkadelic on June 27, Machine Gun Kelly on Sept. 13 and Indigo Girls & Ani Difranco on Sept. 21. This link has more info on the shows.
--
The festival started in Tompkins Square Park in 1993 ... taking place near or on Parker's birthday on Aug. 29. Additional dates were added in Harlem in 2000.
Parker, who died in 1955 at age 34, lived at 151 Avenue B from 1950-1954. That residential building between Ninth Street and 10th Street is landmarked.
Photo from 2019 by Steven
Posted by Grieve at 7:00 AM

Nothing sucks the fun out of an event like SummerStage Corporation.

Outside of the central park shows and the Parker festival there are no public park venues in their line up. The CI events are inside a private amphitheater. Booo. I think they only have the handful of "free" shows hunger the guise of keeping the benefits with $100+ tickets.

Sad to see it leave but It’ll also be nicer than, you know, sitting on dirt. Thanks De Blasio parks department for neglecting the park!

Try again checking out their schedule, so you could spread the correct info about venues and ticket prices.

What's so hard to understand? It's a limited edition this year under the circumstances. It most likely be back to the park next year
Also, it doesn't have the usual star power artist list this year anyway.

The majority of shows are free, Andy

Respectfully, again, outside of central park and the marcus garvey Parker show, what other public park shows are on their schedule? No shows in parks in the Bronx, Queens, Staten Island, or Brooklyn from what I see in that pdf booklet on their site.

Andy, there are shows all over the place?

You may not have to pay cash for tickets, but you certainly have to give up a lot of time and personal information.

Parker-schmarker! what about landmarking the building where Sun Ra and the Arkestra had a residence in the 1960s? and the club where they played every Tuesday night?

322 E 14th St which is now the Nowhere Bar has seen several transformations throughout the decades. I fondly remember Agrotikon in the early 2000s as the only full fledged Greek restaurant in the EV.

Like there's anything the city, state or feds don't know about you by now.
People are giving away any shred of privacy to Facebook and Google, but god forbid the park dept would have your basic info.

This summer the NYC Parks Department is saying a big F U to the whole East Village and the parks commissioner moved the Parker festival , not for Covid concerns , but because if they allow this annual show to be permitted in Tompkins Square Park they will have to allow others to get permits for events in the Park all summer. I believe that they really want to save money by having no permitted events in some parks. Meanwhile riots are now on the agenda for Washington Square because people are fed up with lock downs and want to fight for their right to Party ! If all the neighborhood residents and especially artists and musicians want to use the Park this summer they should organize a big non violent protest at Tompkins Square Park and demand their First Amendment constitutional rights.

The parks department should replenish the grass in the main lawn first. I walked by there today and it looks quite sad. I saw many men and women laying over a towel on patches of dirt. Not the most sanitary conditions when the nearby trash bins are over flowing with food items and cartons next to the rats that cross the park to collect their goodies. I don't know how it has gotten this bad. When they will prioritize this? Before issuing any more permits for musical events and festivities, this should be their number one goal.

It’s problematic that the lawn didn’t get it’s annual care. We are all used to the sign at the beginning of the season saying closed so that the grass can be replenished. What happened this year?
Today I saw a large dog chained up inside one of the other pieces of grass and it had dug a big hole, waiting for it’s family to finish their playtime.

Hopefully the terrible state of the Tompkins Sq Park lawn is a temporary blip due to pandemic stuff happening during the timeframe it would usually be seeded.

Those of you complaining about having to give up personal data for free jazz fest tickets are the crème de la crème of cranks and this wouldn’t be the city I love without you! If pools are open consider going for a swim in Marcus Garvey Park during the shows. I used to live across the street and floating on my back listening to live jazz is a treasured memory.