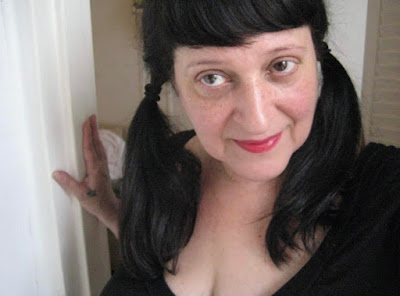 Penny Rand, a longtime East Village resident who was a familiar presence in the Tompkins Square Park dog run, died on May 12. A family member said that she passed away suddenly from complications of her treatment for throat cancer. She was 71.
Her friends recall her as a talented photographer and clothing designer as well as a loyal community member and housing activist.
With city budget cuts preventing the usual maintenance of Tompkins Square Park this past year, Rand helped organized volunteer days to pick up trash and weed and rake parts of the gardens.
In March 2015, she started the Sidewalks of New York Facebook group, which attracted nearly 4,600 members who shared "memories of New York, past and present."
Her decades-long residency dating to the early 1970s here included a friendship with Allen Ginsberg ... and allowed her to document the early days of punk. (Her photo of Harley Flanagan graces the cover of the Stimulators' first single from 1980, "Loud Fast Rules!")
Rand was an animal lover and adored her dog Leeluu and cat Annie.
She will be interred at a private graveside service this afternoon at Cypress Hills Cemetery in Brooklyn. Rand's friends are planning a celebration of her life in the Tompkins Square Park dog run on June 10 from 4-7 p.m.
Thank you to Steven for the reporting on this post.
Posted by Grieve at 6:00 AM

Terribly sad. She will be remembered as a kind and friendly person who deeply cared about the neighborhood and its inhabitants. A great loss.

Very sad news. I enjoyed talking to Penny in the park and she wore her heart on her sleeve, so caring of others and especially animals. RIP.

I met Penny in 1984 when I arrived here — we were fellow East Villagers, and now the neighborhood is now one of us. Rest In Peace, Dear Penny.

June 10th from 4-7pm friends with gather in the dog run to remember penny.

I remeber penny while i was a teenager. For me the memory of her that i recall most is all of her cats she loved so dearly.
I also remember her taking my friend under her wing and caring for her. She helped my friend have a place of refuge when her home was a vit kaotic. Penny was a great dear friend to her and for that i am thankful. R.I.P Penny another good one gone but not forgorten. L.E.S