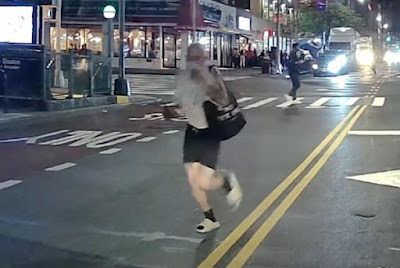 The NYPD is looking for a suspect they say struck an Uber driver in the face with a cellphone.
The attack reportedly happened at 3 a.m. on Aug. 28. Video that the NYPD released this week shows the suspect running east on 14th Street just past Third Avenue.
Police say that the man was trying to hail the Uber. When Gui Ping Han tried to explain that his car was not for hire, the suspect allegedly hit the driver in the face.
According to CBS 2 yesterday, the 45-year-old driver may have permanent blindness in his left eye.
Police did not release a description of the suspect...

🚨WANTED for ASSAULT: On 8/28/21 at 3:05 AM, in front of 203 E 14 St in Manhattan, this individual struck a 45-year-old Uber driver in the face with a cellphone causing a seriously physical injury to his left eye. Have any info? DM @NYPDTips or call them at 800-577-TIPS. pic.twitter.com/Wt4RIDqlve

Never trust a person who wears socks with sandals.

Must be good at running in sandals

despicable. what does his bag say?

Hope they catch this guy but why did rhe uber driver even stop and open his window? Should have just locked the doors and ignored him. This dude screams lunatic from afar and never trust anything/anyone on 14th street.

He’s carrying The Tote Bag by Marc Jacobs, which start at $195. And throwing your cell phone at the help is straight out of the Naomi Campbell spoiled supermodel playbook. Be on the lookout for an angry fashionista who doesn’t understand the difference between a taxi and an Uber.