Someone called the police about the 6th Street sinkhole 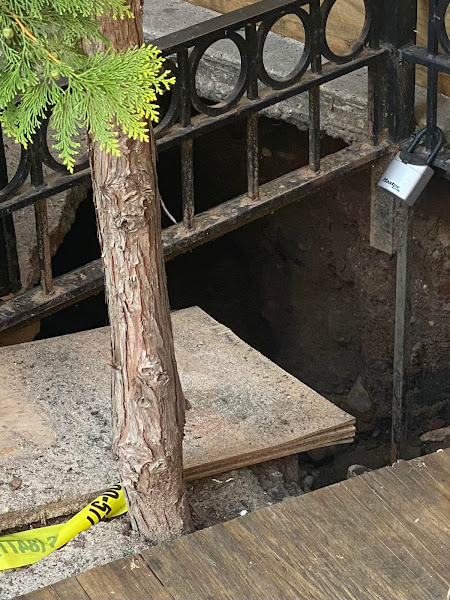 The heavy rains that Tropical Storm Ida brought on Sept. 1 caused a large sinkhole to form in the tree pit and sidewalk outside 338 E. Sixth St. between First Avenue and Second Avenue. (Previously: de Blasio Spider Hole.)
Yesterday, one month to the date that the sinkhole formed, someone called the police about the situation. The report showed up on the Citizen app... 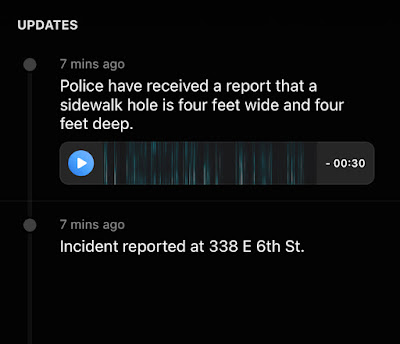 We did receive confirmation that a squad car arrived on the scene... and apparently, the officers called this in to whatever city agency would need to get here to fix this.
Top photo by Steven yesterday
Posted by Grieve at 12:00 PM

Local precinct officers were on site during the hurricane. It is a DOT issue. It is a tremendous safety issue as everyone has to walk out into the street. There is another situation being ignored just like this on Mercer St.

I’m surprised that someone isn’t living in it yet!

Wonder if the artist from bed-stuy who crawls into a very similar sinkhole there in a costume knows about this one? (As reported in the ny post)

This hole is already occupied. a couple of times a day some grey smoke starts wafting out, it builds to a plume and then 8 black mirrored SUVs show up, DiBlasio scuttles out of the hole on all fours and gets pulled into one of the SUVs before roaring off...