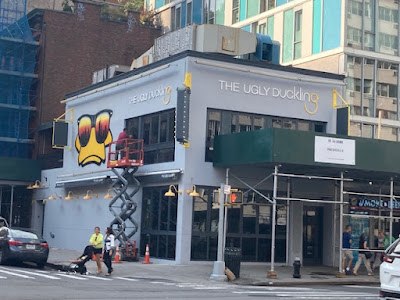 Signage for the Ugly Duckling has arrived on the NW corner of Third Avenue and 13th Street (thanks to Doug for the top pic!) ... 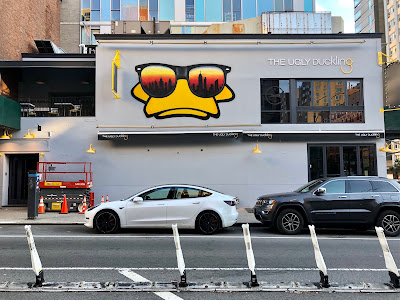 In April, we reported that hospitality veteran Curt Heugel's Host Restaurants, whose portfolio includes concepts such as Bill's Townhouse, Campagnola and Printers Alley, was behind a new unnamed venture... which was to be the previous tenant — the Brazen Fox.
Anyway, they rethought that decision... and the two-level sports bar is now going as the Ugly Duckling (same ownership).
The Brazen Fox closed during the pandemic after nearly seven years in business.
Posted by Grieve at 4:59 AM

So it's not just a clever name.

Didn't mind the food at B.F., Penny Farthing was/is much better though. Did like that small out door seating area on the second floor, in the back... especially if it was not a super crazy sports day.

Cool place but only when not crowded

@ronnie Friend House was there for a while after moving from across the street. I think they changed their name 1/2 way through their stint there. They had great, reasonable sushi.

If I owned a restaurant, I wouldn't call it the "Ugly" anything. I live nearby, prob won't go.

Well, truth in advertising, at least. This location had more credibility when it actually WAS a dive bar named the Dugout Tavern (longer ago than most of you can remember!).

That was when it was not considered trendy to be a loud obnoxious drunk; back then people with a drinking problem did not brag about it, as today's bro's do.

Meanwhile, a few blocks north on 3rd Avenue, Tivoli Diner on 22nd St has a sign up in the window that they are closing as of tomorrow, October 5th. That makes at least 3 diners lost during the pandemic, including Odessa and Good Stuff Diner on 14th St.

I thought the Dugout was next door … it later became the Pit Stop, Looking Glass and Finnertys … and the building was torn down to make way for the glassy 110 3rd Ave condo

This is a joke, right? Please say yes

The Dugout wasn’t on the corner!!

Yep, the Dugout was next door, til it was um, dug up.

The Dugout: where the under-age me could get a frosty mug. Good times.

I miss the Friend House restaurants that were both right in this area, particularly the one with the back garden. Lot of good food and memories there.

Unrelated, why on earth would someone name a sports bar Ugly Duckling? I feel stupid typing the name let alone saying, 'hey man, let's grab a drink at the Ugly Duckling tonight.' Also, why is the duck missing the top of his skull? And his body??

So many questions I have....