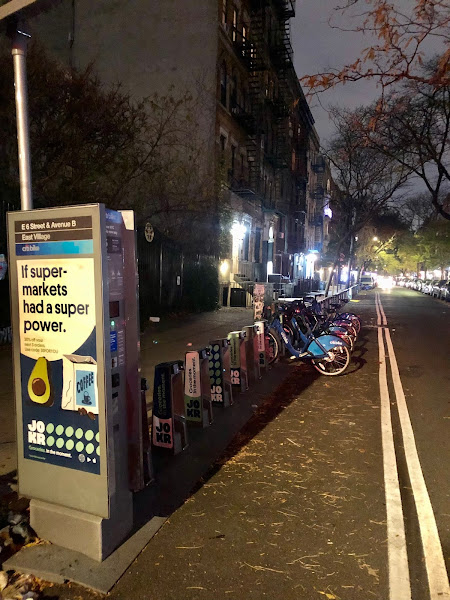 Admittedly overdue on a follow-up on this story... last month, DOT reps provided Community Board 3's Transportation, Public Safety, & Environment Committee an update about Citi Bike's expansion in the East Village and Lower East Side.
That presentation is online now right here. (The DOT is making presentations to other Community Boards this month, and find all that via this link.)
According to the presentation, "demand shows 1,804 docks [are] still needed in CB3." For now, though, the proposal calls for an installation of 683 docks ... with more capacity coming by extending existing stations.
The maps below (click on the images for more detail) show where the infill is slated. The green dots are extensions at existing stations (the only EV extension on the map is at 13th Street and Avenue A) ... while the red circles denote new stations (11 in total, with an "equipment swap" on 10th Street between A and B) ... 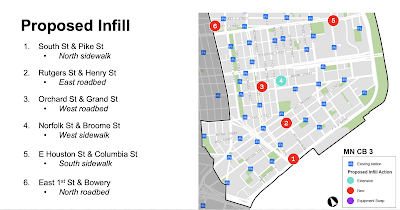 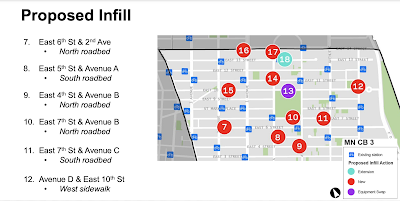 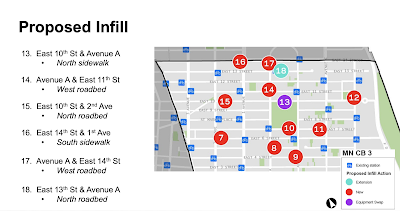 A study by the DOT and Citi Bike found that the ride-sharing service was falling behind in keeping up with the cycling demand of New Yorkers.
As Streetsblog reported on Nov. 2:

Citi Bike announced that it needs the DOT to provide it with sites for an immediate Lyft-funded infusion of docks and bikes because the system is under "added stress [in] its original service area, which serves a disproportionate number of the total rides."
In other words, too many people are either showing up at docks that are empty or trying to return bikes to full racks. Even as it is breaking its own records, Citi Bike estimates that it lost 4 million rides in 2021 because customers are getting frustrated. The company cited the ridership increases as well as "unpredictable commuting patterns as a result of the pandemic.
"An unbalanced system results in riders finding empty or full docks during periods of peak demand," a problem that cannot be totally mitigated through rebalancing or Bike Angels, the company said.

Stories of Citi Bikers wandering around for 30 minutes looking for an open dock — or just a bike — in the evening have become common in recent months. (East Village resident and cycling advocate Sophie Maerowitz wrote an op-ed on the topic for amNY on Nov. 15.)
The Times checked in with an article on the topic as well the other day, reporting that through Nov. 17, Citi Bike had recorded 25.2 million rides in 2021, 4 million more than in all of 2019. (Citi Bike debuted here in 2013.)
But!

[A]s the city has sought to accommodate the surge in both bike-share use and overall cycling by adding hundreds of miles of bike lanes, it has provoked a backlash from drivers and some elected officials who complain that parking and driving are now more difficult.

No word on when the infill might happen within the confines of Community Board 3. The DOT and Citi Bike said they plan to add 8,000 more docks and 4,000 more bikes by the end of 2022, mostly in Manhattan.
Posted by Grieve at 5:30 AM

Can’t wait to use the new stations!

Groan; more sidewalk/street space gifted towards corporations and the minority of folks that choose to use these things. All these controversial street uses that get taken to extremes and benefit a minority... be it parking, restaurant sheds, or cycling infrastructure. Can't we use some of it for something uncontroversial, such as a centralized, less disgusting way of managing trash?

Great! We need it badly

This is all well and good, but when will laws be enacted to require bicyclists to stop at red lights so that pedestrians can cross the streets safely? In addition, bicyclists ride in the wrong direction in the bike lanes. Something has to give!

This is a disgusting allocation of publicly-owned space to a PRIVATE FOR-PROFIT enterprise. And it's disrupting 14th St. which is a bus route, too.

We do NOT need another 1,800 fucking docking stations in CB3. They create a pedestrian hazard everywhere they are located.

The users of bikes are in the minority in NYC, yet they get what they want on a silver platter, while the majority of us are not even consulted. I smell $$$$$ at work here.

Tell me again how cars are taking up so much space for free?
I always enjoy the "pretzel logic" employed by the bike crowd.

I'd gladly pay more for Citibike as soon as all parking spaces in Manhattan are charged by the hour. Compare the square footage taken up by free parking just on 9th street between Ave A and First Ave to the largest Citibike docking station. As a pedestrian I'm not entirely against private vehicles taking up so much public space but I am tired of subsidizing it.

How are you subsidizing it?

1804 docks JUST for the CB3 catchment area? Jesus, why don't we just rename the neighborhood Citibike Village and have done?!? It's a friggin' invasion!

Taxes. Why do I pay to maintain 9th street as a free parking lot with very little pedestrian access? One lane for deliveries and ride shares would be enough. Or metered by the hour parking on one side of the street.

I love the idea of biking, but I hate the dangerous conditions it creates in the East Village, so am not a fan of adding more Citi Bikes. Almost all bikes goes through red lights --and most at high speeds with cell phone/earbud music distractions.

I don't feel threatened in other areas of the city that have higher car traffic like Midtown East, Hells Kitchen, etc. In these areas, most bicyclists are compelled to stop at red lights, so they don't get hit by oncoming traffic. But not in the East Village.

<>
By the massive amount of public space now taken up by this corporate business. By the massive amount of public space provided to advertising and resulting eyesore. 11:53, We'd love to see the records to know exactly what they are paying and exactly what they are getting, including the massive payoff from your personal data - you know, your credit record and your association record and your geographical movement record etc etc. Who has the liability on these bikes when they hit me?

Cool. This post hit all of the usual "talking" points except for one. No one complained about the actual bike lanes being blocked all of the time. They really are. But, I guess there's still time.

If you are going to increase the amount of docking stations and available Citibikes, then it follows that the density of bike traffic will increase. To me, it then becomes obligatory that the rules and regulations of the road must actually get enforced. That’s the quid pro quo here- you can’t have one without the other. No riding the wrong way or disobeying traffic lights, no riding anywhere on the street or weaving in and out of traffic, and staying the hell off the sidewalk, having headlights and using them at night, etc. must all be enforced and people must be made accountable. That means the cops have to be instructed to do their jobs and catch these bad actors who endanger pedestrians, car drivers, and their fellow bike riders. It seems to me that it’s high time the City administration took the enforcement part of this discussion seriously. In my ideal world there would also be license plates for all bikes and mandatory insurance carried by all riders.

I'm a frequent citibike user (and also have my own bike) but we really don't need this many new stations in the neighborhood. I'd much rather see expansion to parts of the city without good transit infrastructure and the parts currently without citibike. Then consider adding more to an already serviced neighborhood. And before adding more bikes, how about maintaining the ones currently in circulation! It's rare to get a bike in good working order and the e-bike batteries are a complete joke. And work on rebalancing. Before Lyft took over, there was much better rebalancing but I see none happening, aside from the Bike Angels who can't accomplish much as individuals. Sure, the pandemic disrupted commuting but it's not hard to look at usage patterns over the past few months to notice that certain neighborhoods are always out of bikes or always full at certain times of the day.

all you pedestrians, get off your phones and look both ways before you cross the street... esp if you're doing it in the middle of the block or when the red hand is flashing.

This is all b.s. Lyft fired all the rebalancers in the EV before the pandemic and thought they can just petition the city for the additional docks, saving a bundle from all the staff they fired.

Wow.
Citibike stations are more numerous, closer together and convenient - than bus stops.

Since 2009 when bike lanes were rolled out, there has been a massive expansion of the biking infrastructure - while at the same time a steady cut in bus service, frequency, routes and stops.

@5:27pm: I consider the overpopulation of citibike docking stations to be absolutely offensive, b/c the proliferation of these structures was never voted on by ALL of us who are taxpayers, much less by any of us who are impacted by this.

Worse, this unimpeded proliferation of docking stations represents an active form of ongoing discrimination against older people & against anyone with mobility issues of any kind. The docks are OBSTACLES and they render large amount of the sidewalk and the curb inaccessible for a hundred feet at a clip. This inaccessibility is genuinely dangerous. I'm surprised that more people don't get mugged at these docking areas, b/c one's ability to get away and run is pretty much zero.

This situation should NEVER have been permitted by any authority, NYC or otherwise. I believe these conditions deserve to be the subject of a big fat lawsuit, since the docking stations create numerous violations of the Federal ADA requirements.

All citibikes have headlights. Citibike can say who uses which bike at any time which is far more information than a license plate

Where are the bike rebalancers with valets from pre-covid? I think they moved 500+ bikes per day (x2 M-F), filling in for am, taking out for evening park. Citibike's pat twitter reply to no docks/no bikes is we're working on it, bah! Bike Angel points are pitiful now.

Citibike and SantaCon we should make it a thing this weekend.

Again... it may be a hard concept for people to understand, but many of us actually use our cars for work to haul things to places outside the city... you cannot haul equipment and tools on a bike and it is not fair to screw people over even more who depend and have depended on that for years. any alternative you tell me cost more... means i lose clients and the ability to work outside the city.

again, you may think cars are just some BS, and maybe some people do have BS reasons, but if I don't have mine, I don't make money, and I don't live here... only oh yeah i cant afford to do this anywhere else. I pay my city taxes and I obey the parking rules...

Funny, more docks for bikes? The biggest issue is they are all full stations which means they need less bikes not more, wtf? Charge for parking permits and allow more parking of cars that’ll help