Text and photos by Stacie Joy
Partners in music and life, married couple Viveca Butler and Stephen Cacouris are The Acute, an East Village-based lo-fi duo.
I recently spent a seasonably warm fall afternoon walking around the neighborhood with them, talking about bands and music, audio engineering, and what it’s like working, touring and living together. 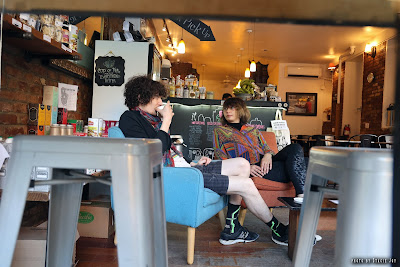 What is the band’s origin story?
Cacouris: We initially met a while back at an MGMT show, but never again until 2017, when we began jamming in a Williamsburg music studio. We instantly began writing and thought of all the ways we could shape our sound that felt unique, relevant and organic.
Butler: It was a clear sign from the universe when we kept running into each other and shared similar opinions regarding music. I wrote bass parts originally before stepping into the drumming/songwriting realm. The first song we worked on together was “Database.” We would play each other songs we loved for hours; he turned me on to Can and The Fall, I showed him Killing Joke and The Adverts.
What is some of the music that shaped your music life — or life in general?
Cacouris: We’re very attached to our rock and roll! From the 1960s through the 1980s, we are tuned into the bands that created this amazing genre, like The Kinks. Bands that shaped my life include The Velvet Underground, The Replacements, The Seeds…
Butler: Ultimately, I can say The Kinks brought us close together. Other than that, I have a passion for 1980s musicians such as Gary Numan, Siouxsie [Sioux], Pat Benatar, Roxy Music, Tears for Fears, Michael Jackson, etc. I also love funk from the 1970s, like Sly and the Family Stone, and reggae such as Steel Pulse.
Cacouris: Obviously, The Fall, we’re named after them. The Stooges’ Raw Power is awesome; we were just talking about it. I’m nuts about Gil Scott-Heron. We love 1980s music, though. The beats and development of rock into this big, booming genre was a real upheaval… And Viv has gotten me to listen to Genesis with a newfound appreciation — you learn something new every day. 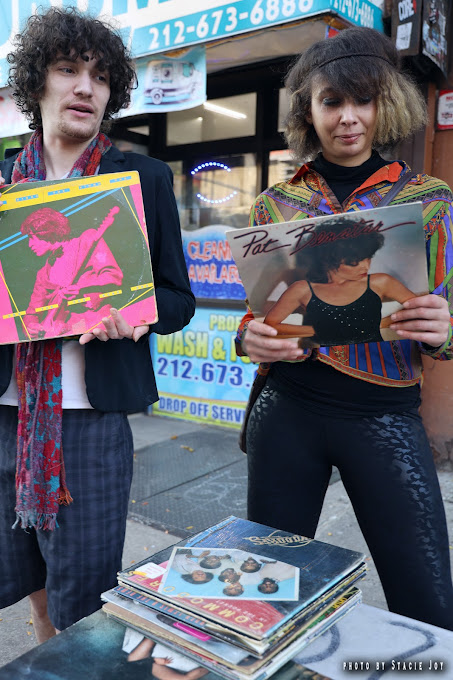 How and why did you decide to call the East Village home?
Butler: I was always drawn to the East Village for the creative energy and the starting point of great bands such as the B-52’s, Dead Boys, Bad Brains, Redemption 87, The Heartbreakers, Blondie, Talking Heads, etc. My best friend when I moved here lived on Ninth Street and I would stay on her couch after long music-listening marathons; it was my second home. One of my first jobs was at a restaurant called Aquiloni that doesn’t exist anymore on Avenue A and 12th Street. After work, I would hang and skate in Tompkins.
As for music, the best venues have always been here. I went to some all-ages punk shows at the Continental and ABC No Rio. I even managed to see the Cro-Mags and (part of) Bad Brains. I started out playing drums for open mics at the Bowery Poetry Club. Eventually, I joined bands that played Arlene’s Grocery, Piano’s, Rockwood Music Hall, Webster Hall, Mercury Lounge and more. I took lessons at the music studio on Rivington that is now closed. Iggy Pop and Joe Strummer were also my idols as a kid. We finally got to move here a year and a half ago, and I couldn’t be happier.
How has playing in Tompkins Square Park helped you grow as a band, especially during the pandemic?
Butler: It was no walk in the park! I commend musicians and bands that master the art of playing outdoors regularly. The acoustics are completely irrelevant to a studio or venue and adapting can be challenging yet rewarding. It has definitely been a growing experience and added another dimension to our music.
Cacouris: Yeah, it’s really strange and fantastic. There’s a freedom that comes with playing to a crowd of passersby and music geeks such as ourselves. It brings out the inner life of shows on the Tompkins grounds. A really good thing for us to have done. And it always brings surprises!
You recorded and mixed the new album yourself. Why did you decide to do this and not seek any outside help?
Cacouris: It just felt like the right thing to do. We’ve been working for years at developing our skills in a limited capacity, but putting it all together was really amazing. We had dreamed of building a record from the initial sonic choices to the final cut, and it was an unforgettable experience!
Butler: We started recording last fall/winter, right during a new wave of the pandemic. Most engineers were unavailable due to social distancing, so even if we wanted to work with someone — and we did, our fantastic engineer friend Matt Vanek — it would have been tricky. We were both also interested in engineering something ourselves from the ground up.
We mixed the Infinidy EP ourselves, but Matt recorded us in a very cool way, which inspired us. The studio we rent has engineering equipment and we decided to jump in and learn. There are so many things that go into a good recording, such as the type of mic, distance and feel/way to play that suits recorded music. 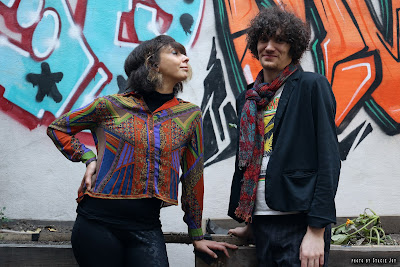 You live and work together, do the rigors of all this ever strain your relationship outside the band?
Butler: Our relationship outside of the band is actually not an issue. That would be the easy part, as we enjoy each other’s company. A band is a partnership that can go deeper than any other relationship. It is in itself a marriage based on trust and being your better self, or the opposite sometimes! I am not an easy person to work with, but I am learning how to let up on the material a little and really listen to Stephen’s suggestions.
With music always comes self-criticism, so having a partner to help develop ideas is a great help but can sometimes lead to the old head-butt. It is a learning experience and we figure out what works best as we go. If I worked as a solo artist, I would not have to share everything creatively but would be extremely lonely and unfulfilled (I tried once).
Cacouris: Me too, ha! Working together has been magical and, of course, at times stressful, but delegating tasks and enabling better communication are key.
What are your expectations with the new record? What’s next for The Acute?
Butler: I hope the new record shows the core of who we are. After our first full length is released, we hope to do some touring and start the second album. We have enough material and even can picture the start of a third…
Cacouris: We’re taking it one day at a time. These songs are near and dear to us, and we can’t wait to get the record out to you. Keep an eye out!
You can do just that here.
Check out their new single, "Alien Theatre," right here...
Posted by Grieve at 12:00 PM

It's great to see people with rock and roll fashion in the East Village. It is practically non-existent now. Varied visuals on our streets make it fun.