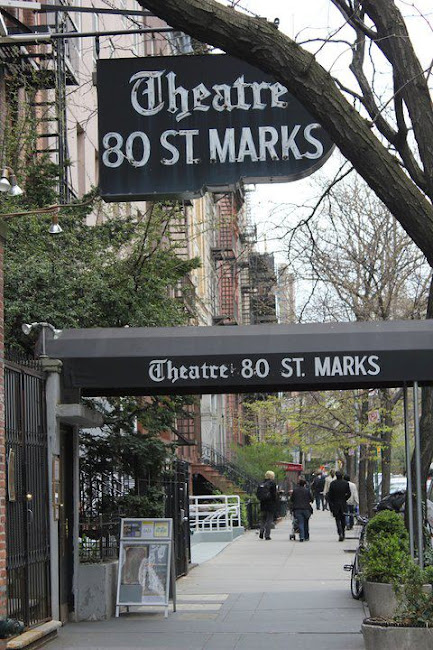 Let's get caught up on what's happening at Theatre 80, the historic East Village property that houses a performance space, the William Barnacle Tavern and Museum of the American Gangster at 78-80 St. Mark's Place between First and Second Avenue. (There are also several apartments here, and Foxface is a retail tenant.)
Owners Lorcan and Genie Otway have been working to prevent Maverick Real Estate Partners — an aggressive mortgage investor — from auctioning off the two buildings that Lorcan's father first purchased in 1964. (The Real Deal first reported on Maverick's hardball move in October.)
In a story published online Thursday, Lorcan told The New York Times that the theater, museum and tavern were in good financial health until March 2020, when, like other businesses, they were forced to shutter during NY State's PAUSE.
More background from the Times:

Shortly before then, he had taken out a $6.1 million mortgage against the properties to settle an inheritance dispute, pay legal fees and finance needed renovations.
With the pandemic lockdown and a precipitous decline in revenue, that loan went into default and was purchased by Maverick Real Estate Partners about a year ago. The firm, according to court documents, has closed over 130 distressed debt transactions, with a total value of over $300 million.

The Times reported that the original lender later sold the debt to Maverick without Lorcan's knowledge.

Maverick, Otway said, then raised the interest rate to 24 percent, from 10 percent, bringing the roughly $6 million debt to about $8 million.

This past Wednesday, as Bloomberg Law first reported,  the Otways filed for chapter 11 protection in the U.S. Bankruptcy Court in hopes of avoiding foreclosure by Maverick Real Estate Partners. The properties were being marketed for foreclosure sale by Cushman & Wakefield. As The Wall Street Journal noted, the filing offers "a breathing spell to refinance an $8 million loan."
According to The Village Sun, Lorcan's plan is to ask Gov. Hochul for a low-interest loan for Theatre 80. Per the Sun and CBS 2, he reportedly has support from several local elected officials, including Congresswoman Carolyn Maloney, State Sen. Brad Hoylman, Assemblymember Harvey Epstein, and City Councilmember Carlina Rivera, who told the Times that "this is a heartbreaking story."
Later this month, John McDonagh is hosting a benefit performance of his show "Off the Meter," a comedic take on his years as an NYC cab driver. The benefit takes place Jan. 21-23 at Theater 80. Find ticket info at this link.
You can also support the business by having some food or drink (with more than a dozen varieties of Absinthe!) at the Willam Barnacle Tavern. They have a nice outdoor space too.
Theatre 80 is a crown jewel in this neighborhood, and in NYC... the kind of place we need to protect and support.
Image via Facebook
Posted by Grieve at 5:20 AM

Email ThisBlogThis!Share to TwitterShare to FacebookShare to Pinterest
Labels: Theatre 80

This is what 2 years of little to on income creates.

Greed will do us all in,

"Maverick, Otway said, then raised the interest rate to 24 percent, from 10 percent, bringing the roughly $6 million debt to about $8 million."

Oh this is awful, I don't know what to say. I hope the situation can be rectified, but it feels like another loss for all of us.

thank you for the good reporting.i used to see killer double features here back in the 80s, when smoking was allowed "at the north end of the coffee bar"! what else can i do to help besides visit the wonderful barnacle? i don't want this wonderful place to go!

You cant gloss over the never ending restrictions and lockdowns. This has happened to many businesses. They had bad luck but they borrowed millions of dollars at the worst possible time.

It doesn't matter what they do if they don't have the revenue to pay back the loans they took out. The long term economic damage is just beginning

24 percent interest? That OUGHT TO be illegal! That's a predatory rate, to put it mildly. Maybe the new mayor would like to run the predatory lenders out of town?

This piece of property has been plagued by drama but 24 percent interest! That's insane. The biggest loss would be the loss of the theater. I hope at least that portion of the property could be saved. I wish a non-profit theater company could afford to buy it but that's a pipe dream.

Buy it and do what exactly? Have no revenue due to lack of tourism and lack of customers?

Is there a petition to Governor Hochul to sign?

So heartbroken to lose another business, or even the possibility of it.

The pandemic is neverending

Someone needs to win the lottery and just give them the money. Or ask a billionaire to find some old bitcoins in his sofa cushions to bail them out. I remember how they supported the neighborhood after the Second Avenue gas explosion by hosting the fundraiser with Patti Smith. It’s time for someone to return the favor and support them.

Do they have a go fund me page? I remember seeing Niagra with Marilyn Monroe there as well as Caligula. I would love to contribute and sign a petition.

Yeah, those double features were very carefully curated. I have an old flyer from the 1980s. Do you guys remember them? Super long paper and tiny typewriter typeface with a summary of each film. I was so impressed with all that effort, I saved it. Come to NYC, disappear for four hours. It was fantastic. I think I saw Picture of Dorian Gray & Rebecca together.

Reading the bankruptcy filing, it seems like Otway took a hard money loan that he had no hope of paying back without selling the building. Maverick and covid didn't help of course, but I'm just not clear as to how he was planning to come up with $6.1 million plus interest in just one year. I'm guessing this all goes back to this 2015 story about his brother suing him.

That post on EV Grieve from 2015 about the family legal drama over ownership is an eye opener. It's so sad the siblings couldn't resolve the ownership issue years ago. Things could have been so different. Now who wins? Probably a big real estate investment firm that will tear it all down and turn it into condos.

I saw North by Northwest there about 12 times in the 80s. So sad at how $8 million is an impossible amount of debt for a small business in NYC to handle, and yet, probably what Bezos makes in about .0005 seconds. If I were a gazillionaire, I would totally bail each and every one of these wonderful businesses out! (But that's why I'm not, I guess, or at least not a fucking selfish evil asshole who would rather see humanity destroyed rather than give back.)

Imagine if Niagra and Caligula were on the same bill? Amazing.

yes yes yes. We gotta keep this one going. It's a staple of the community and neighborhood.So much history!!!
ok, I go back about 40 years of attending events, movies and performances there. I introduced my immigrant partner to a double feature of Singing in the Rain and Wizard of Oz. (did I really? Lorcan remind me!! That's what I think we saw in 1980. 24%! for just offering that, Maverick should be jailed!

"In 2008 Lorcan also bungled a lease renewal with its biggest tenant, Pearl Theatre Company, according to Thomas’ filing.

Pearl walked away from the space after Lorcan mishandled negotiations, according to the filing. Thomas claims Lorcan then leased the space to himself and opened his own venue, Theatre 80 St Marks."
https://www.dnainfo.com/new-york/20151221/east-village/man-threatened-become-journalist-if-mom-sold-their-home-court-docs/


My best memories of Theater 80 are of New Year's Eve programs there in the early 90s -- fizzy screwball double features, the kind where people were usually in evening clothes (I saw The Lady Eve there for the first time, with a break from about 11:45 to 12:15 for champagne and canapes in the lobby. Virginia Kelley ex- of East 7th Street