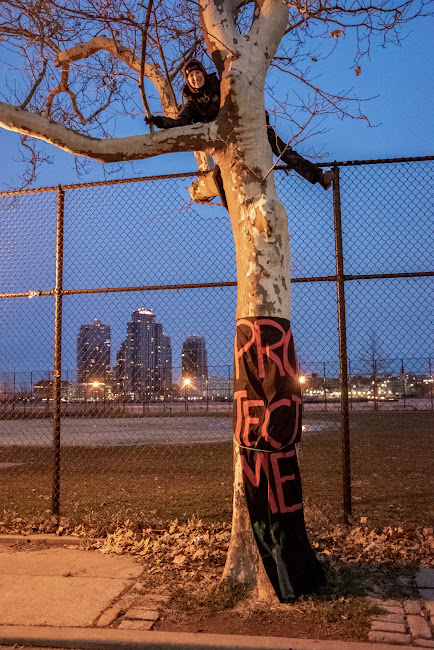 Photos by Daniel Efram
In the pre-dawn hours on Monday, a group of activists gathered in a blustery East River Park to continue to bring awareness to the destruction taking place as part of the $1.45 billion East Side Coastal Resiliency project.
Group members draped "Protect Me" banners on several of the oldest trees along the greenway just north of the active worksite that starts at Stanton Street... eventually, five people positioned themselves in the trees for several hours ... 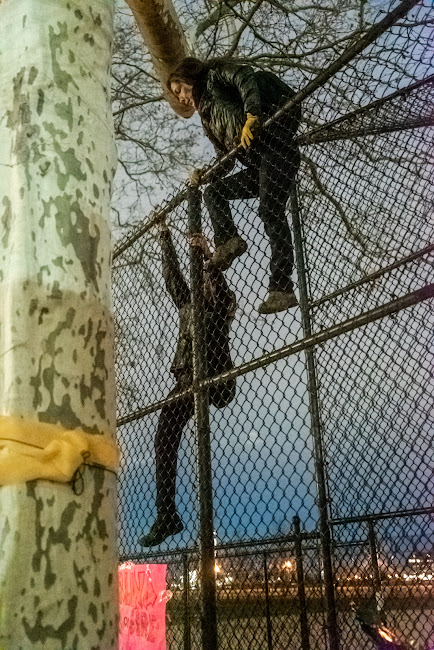 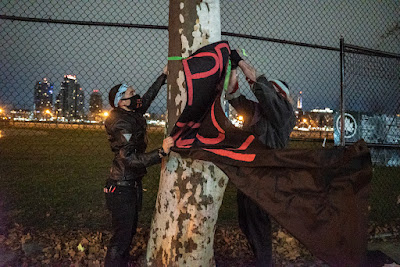 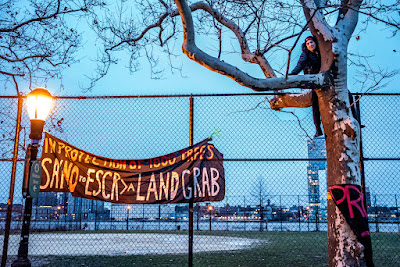 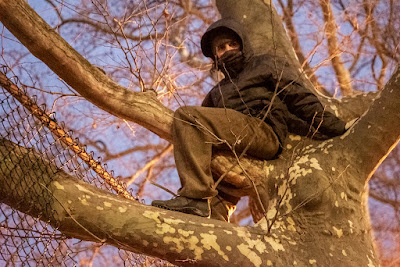 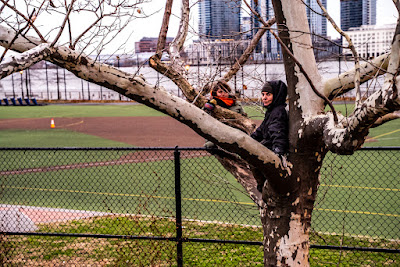 Yesterday, the @1000people1000trees account reported that workers cut down a tree in the greenway but stopped their attempts on another tree when more group members arrived.
The group issued a statement on Monday that read in part:

Concerned community members have come together in protection of East River Park from this ecocide needlessly being carried out by the City with an extraordinary lack of safety measures in light of unprecedented conditions created by the COVID-19 surge and in the absence of any State, City or Federal official or Agency willing to claim responsible environmental oversight. In response to these calamitous conditions, we are opposed to any further areas of the park being fenced off and subsequently demolished.

Community members opposed to the current version of the city's floodproofing plan for East River Park gather daily this week at 7 a.m. at the Houston Street entrance... I admire the activist tree huggers and mourn daily the loss of our park, a microcosm of some of the larger national issues in our country, driven in part, by greed. And I wonder, peripherally, about that giant Arctic ice sheet that is melting and detaching itself and what the result of those changes will do to New York City. It brings to mind magical thinking and the idea of lost cities, Atlantis. Admittedly I have not been following the ebb and sway of the court battles on this one, but it feels like a gut punch anyway, senseless destruction of natural beauty, a kind of Robert Moses moment for the LES. I cannot even walk over there now. It's like survivor's guilt.

Thank you for publishing these updates.

This is how you stop construction and government ignoring stop work orders! Go go go! Keep the movement thriving. If the government can’t work with the citizens of these neighborhoods then they deserve every delay and halt of progress, just as the politicians did to the communities here.

Neither of the plans will save lower Manhattan from climate change. Only one plan would have been preventative and not destroyed a park and spent unnecessary changes. The other plan was designed to cater to car drivers from being inconvenienced for a short period and to hand out to developers and had its environmental studies hidden (because it’s a worse solution).

This is what real bravery looks like. So disappointed that NONE of our pols tried to stop this terrible plan, and some actively worked for it.
This park, whenever it is finished, will have no shade for decades, and not support wildlife as it does now. Nothing but fake astroturf and scrawny trees. A precious resource has been snatched from our neighb orhood in plain sight. It makes me so sad to think of those beautiful old trees being chainsawed when none of this was necessary.

ESCR will eventually be remembered as a model of how NOT to protect against the effects of climate change in a dense urban area. That is, if humanity survives.

As the trees are cut down, the squirrels have literally nowhere to go. They build nests in the trees where they sleep and hide from predators like hawks. Remove the trees and their nests, and they have nothing. They have no exit from the park - the only way they could relocate would be to cross the FDR. This extermination of wildlife is a crime.

As long a they don't tear the whole park down at one time, the squirrels in the destructed areas will be able to migrate to another park of the park that hasn’t yet been destroyed. The problem is that squirrels are fairly territorial, and will begin to attack each other when their territory is invaded. The next problem will come once all the trees are removed and new, smaller trees are planted, Most of these new trees will not be able to support the squirrel (or bird) populations, and the squirrels will have to cross the footbridges to find a new home in the trees around the projects. I doubt the animal population was taken onto account at all in this plan which is doomed to failure anyway, but this is a reminder that its a good idea to bring along a bag of nuts or fruit to help feed the squirrel population, which will be struggling for their lives for years to come.

While ESCR claimed the park north of Stanton St would remain open for the next two years (see Dec 3 notice), they are now closing it off up to 10th Street (see Jan 3 notice): https://www1.nyc.gov/site/escr/project-updates/pa1-notices.page The dudes with the power saws are mutilating the trees with no coherent plan. And certainly no communication to the community. Just making it up as they go along. The destruction of urban wildlife habitat and outdoor space for humans is seems unbelievable--even after all we've been through locally, nationally, and globally. This is a stark harbinger of what's already come. Don't look up!

@Giovanni: Why would the landlord class take anything into account that can't be put in the bank? They have to save for their children's college education; nothing trumps that—not even ecology and science!

I agree with you; I've been carrying peanuts—from Chinatown—everywhere now, and will continue to do that. I'll probably start carrying birdseed as well.

Thanks to EV Grieve for being a voice for this discussion!

The ecology of the existing park is only part of the issue. The other part of the issue is that there is NO ENVIRONMENTAL oversight for the health of residents based on the digging and destruction.

Please contact Epstein, Rivera, Kavanaugh, Yuh-line, Mark Levine (new Manhattan BP), Maloney, Rana For Congress, Hoylman and the new comptroller Lander and demand Environmental oversight. If they tell you that there is such a thing, demand that they prove it in a public statement/show and tell.