[Updated] 1 wedding and a demolition 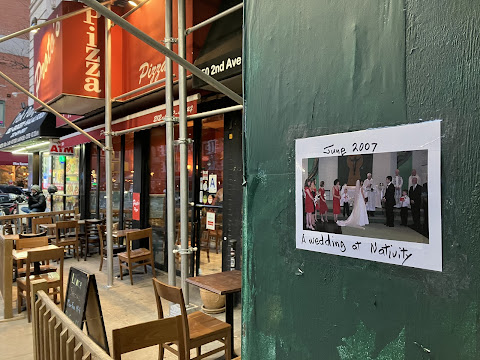 As reported on Thursday, workers are demolishing the deconsecrated and shuttered (as of July 2015) Church of the Nativity at 44 Second Ave. between Second Street and Third Street.
EVG reader Leo points us to a photo now displayed on the plywood outside the church... showing a wedding there from June 2007... 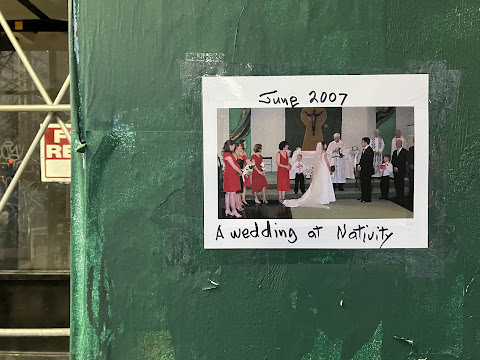 We're told that this is Tanya Theriault and Matt Vogel, two former Maryhouse volunteers who now live in New Orleans with their family. Father George Anderson, who died in 2020 at age 86, performed the ceremonies.
Thank you Felton Davis!
Updated 4/3
Someone removed the wedding photo... so Felton Davis put up a new photo on the plywood... a shot of Dorothy Day at the entrance to Nativity Church, circa 1978 ... 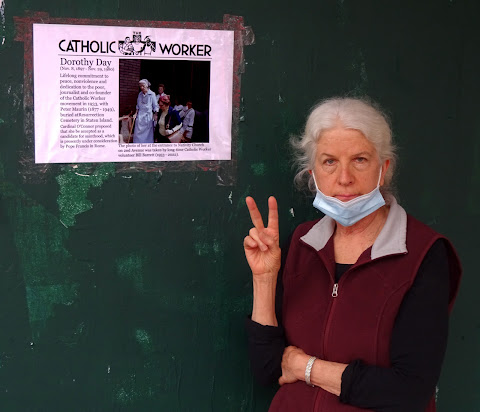 Standing next to the photo — Day's granddaughter, Martha Hennessy.
Previously on EV Grieve:
• Remembering Dorothy Day, with a call for a shrine in her honor on 2nd Avenue
Posted by Grieve at 9:30 AM

Email ThisBlogThis!Share to TwitterShare to FacebookShare to Pinterest
Labels: Church of the Nativity, Dorothy Day

https://www.nytimes.com/2022/01/21/nyregion/dorothy-day-sainthood.html
NY Times, January 22, 2022
Was Dorothy Day Too Left-Wing to Be a Catholic Saint?
By Liam Stack

Excerpt: Hundreds of people gathered at St. Patrick’s Cathedral to celebrate an important moment for Catholics in New York. Cardinal Timothy Dolan delivered a homily on the life of one of their own, Dorothy Day, a native New Yorker and anarchist writer and activist who died in 1980. The sermon last month represented the end of a 20-year inquiry by the Archdiocese of New York on whether Ms. Day should receive sainthood, a question the Vatican will ultimately decide. Many of her admirers, including her granddaughter, had hoped Cardinal Dolan would talk about her commitment to social justice for the poor and the oppressed and her opposition to war and capitalism. In 1933, Ms. Day — often described as both politically radical and theologically orthodox — founded the Catholic Worker Movement, which remains active around the world in the form of Catholic Worker houses, where members live for free and provide services to the poor. But in his sermon, Cardinal Dolan described Ms. Day’s “far from sinless life.”