After being hit by a car, Noor the cat is doing well at home with his new East Village family 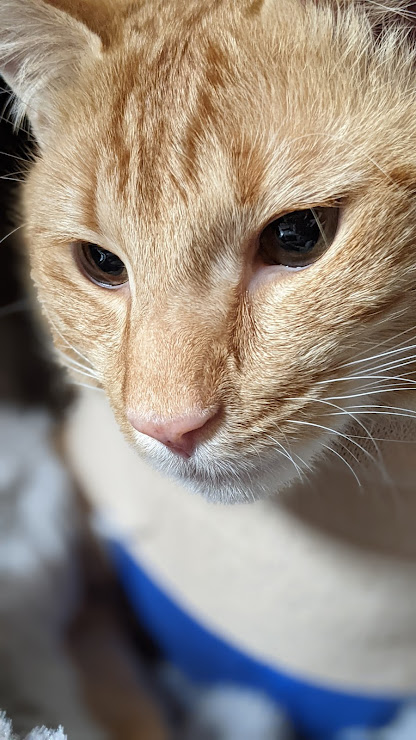 On March 20, Noor darted out of the storefront he stayed in and was clipped by a passing car on 10th Street between Avenue A and First Avenue.
Noor suffered extensive injuries, including pulmonary contusions, traumatic brain injury, a left humeral fracture, abrasions and bruising. The fracture on his front limb was severe enough that amputation was a distinct possibility.
East Village residents Rachael Brungard and Matt Lipson, who witnessed the collision, took responsibility for Noor's care and launched a crowdfunding campaign to cover his medical expenses.
Rachael shared an update — and it's all mostly positive. For starters, based on new x-rays, Noor will be able to keep the injured leg. Noor is now at home with Rachael and Matt, where — on the vet's orders — he is on cage rest for four to six weeks so his leg will heal.
"Poor baby is bandaged up like crazy. Honestly, it looks very uncomfortable, and it is difficult for him to move around in his cage," Rachael said via email. "But he's doing well, despite that. More than anything, I think he's just bored, so we are doing our best to keep him entertained!"
So he has been enjoying a tiny teddy bear named Barry and some YouTube videos for cats... 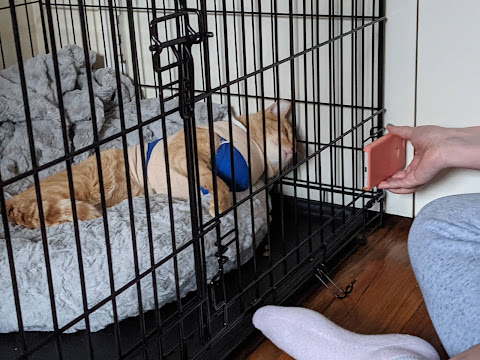 And here are some other shots of Noor in his new home... 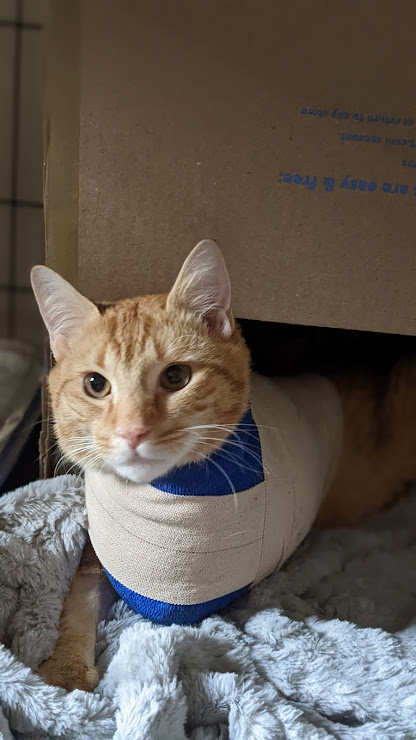 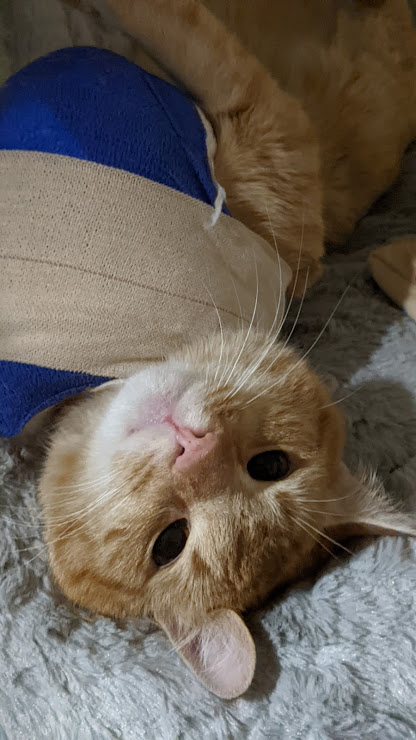 There has been a lot of kindness surrounding Noor's care. For instance: Dr. Moskovich at the Village Veterinarian on East 11th Street waived the fees for Noor's care during his recovery time there.
So the lone medical bill for Rachael and Matt is for Noor's ER visit, roughly $5,500 — which the GoFundMe will help cover.
"Now that we're getting to know Noor more, I'm really noticing how truly kind and gentle he is," Rachael said. "It's hard to capture Noor's loving nature with pictures alone."
Posted by Grieve at 5:16 AM

Such good kind humans !
Poor Noor - but soooooo glad
he has a new happy and safe home.
Maybe he should get a new name for his new life and home ?

Blessings on all who extended themselves to help this cat!

Special props to Rachel & Matt for stepping up to the plate for Noor; you're truly good people and you make our neighborhood (and our world) a better place.

Best wishes to you all.

I did contribute to the fund. Will do so again. I am a cat dad and EV resident. Not a religious or spiritual person here. I did send positive energy into the universe for this beautiful cat in hope he would survive. So happy he is responding to treatment and will have a happy life with loving parents. :)

I hope the people from the bodega that was formerly his home made a donation to help pay the bills.

So happy that Noor has such a caring and loving home. You can tell from the photos that he knows he is loved. I wish him a speedy recovery and a long and happy new life!

This is so wonderful!

Rooting for you Noor and your parents !