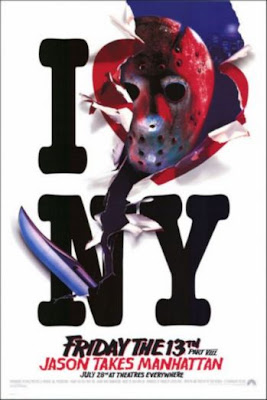 Friday The 13th Part VIII: Jason Takes Manhattan is, of course, the most realistic film ever made about New York City. As the review on AllMovie.com notes, "Screenwriter Paul Schrader and director Martin Scorsese place this isolated, potentially volatile man in New York City, depicted as a grimly stylized hell on Earth, where noise, filth, directionless rage, and dirty sex (both morally and literally) surround him at all turns. When Jason attempts to transform himself into an avenging angel who will "wash some of the real scum off the street," his murder spree follows a terrible and inevitable logic: he is a bomb built to explode, like the proverbial machete which, when produced in the first act, must go off in the third."

[Hey...wait a minute here! C'mon, it has been a long week...In all seriousness, there are some unintentionally hilarious moments in Part 8...You get the idea just be watching the opening...]