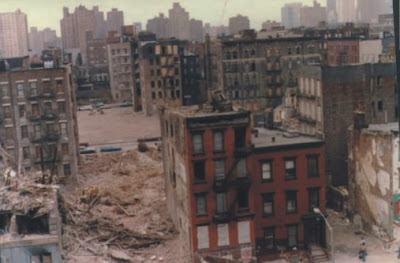 Does it feel some days as if New York-- wealthy, successful, seemingly at the top of the world -- is slipping back into the bad old days of crime, noise, dirt, rudeness? Like pentimento rising from an old canvas, the traces of New York's previous misery are appearing on the streets and in the subways -- graffiti, aggressive panhandling, open drug dealing, filthy public areas, ear--splitting noise, screeching sirens, a sense of disorder we thought was gone. It's not "Soylent Green" again, but the old Hollywood sense of lawless New York is rearing its ugly head. 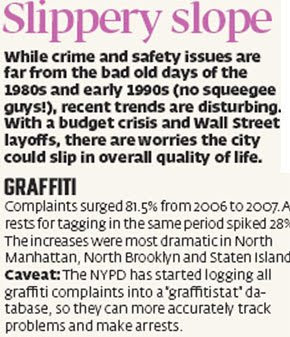 And fast-forwarding past a lot of analysis and stats and what not:

Are we heading backwards? No, but we need to remember our own heritage.

New Yorkers haven't always understood that some ominous trend was beginning. For example, 1958 was the start of what the late Erik Monkkonen, a historian at UCLA, called New York's "rogue tidal wave of violence." Almost no one noticed at the time. It lasted until 1992, when the Dinkins administration, under Commissioner Ray Kelly, began its Safe Streets program. And while Monkkonen was optimistic about New York's future, he warned of the relentless cycle by which, once some "lower level of violence had been achieved, the mechanisms for control and the value of peace get forgotten, and a slow rebirth of violence begins." We can fool ourselves into thinking that the New York of the last few years is the New York that will always be. But our city is and always has been a tumultuous place, in which the miseries of the past don't seem so far away. We need to be vigilant, as we have been since 1992, against the small, unpleasant, menacing intrusions on New York's quality of life.

We know that New York's economic engine, the financial industry, is under immense strain, that the mayor's budget faces severe deficits, and that some businesses are starting layoffs.

[Image of the East Village in the 1970s from Litter Bugged via Filthy Mess]
Posted by Grieve at 11:23 AM

"before reading this article i felt as i was in a suburban westchester town, crime free. but now for the first time in 14 years i actually have worries about turning the street corner."

Wow. Missed that one, Jeremiah. Thanks for pointing out the comment.