And yesterday? Gawker's Richard Blakely had this report last night:

"I had the great misfortune of going to The Belmont Stakes today. It was a douchefest much like last year's. I waited in a long line to use the restroom for about 30 or so minutes and when I finally got to the front I overheard someone say, 'Hey look at that guy, he can't wait and he's just pissing in the trash bin." Just then someone else corrected him and said, 'Oh no, the bathrooms in the entire complex are out, this is the line to piss in the trash can.' It was at that point that the place started to look more like the convention center after Katrina.

Ugh. The Times had this to report:

The scorching heat at Belmont Park on Saturday took its toll on everyone — the jockeys, the horses, the fans, and perhaps more than anyone else, the people waiting in line for the restrooms.
The temperature was 96 degrees at its peak and Belmont seemed to be unprepared for the demand for water. John Lee, the director of communications for New York Racing Association, said that the water had to be shut off in places and the pressure was lowered everywhere else to help conserve it.
“The problem didn’t come to light until there was extremely high usage,” he said.
Women began using men’s restrooms and lines went more than 50 sweating, complaining people deep.

Gawker commenter MrInBetween had this to say:

I pissed in a barrel after a 20 minute wait ... On the way out of that shit-box, a drunken frat boy . . . stepped on my foot, then told me to "fuck off." I had to be restrained from ripping his head off. I wish I had; it would have redeemed the day.

And this photo pretty much summed up the entire day... 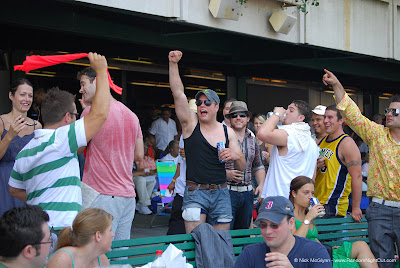 Plus, of course, Big Brown lost.

And we still may be losing the OTBs.