Hope for OTB: The end may not be so near 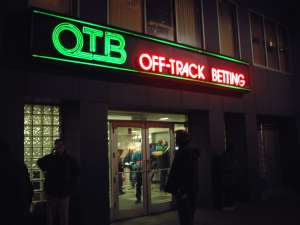 According to NY1:
A day after Mayor Michael Bloomberg said the end is near for the city's Off-Track Betting Corporation, Governor David Paterson said he is considering a state takeover of the organization. Bloomberg has threatened to close down the city's betting parlors on Sunday unless a permanent resolution can be reached that will not cost the city money. OTB actually generates $125 million a year in profits, but the city loses money because most of the revenue goes upstate to subsidize horse racing. Today Governor Paterson said he would explore every option to preserve the revenue and jobs that OTB generates. Nearly 1,500 workers would be out of a job if OTB shuts down.
Previous OTB coverage on EV Grieve can be found here.
Posted by Grieve at 6:30 PM