Come on in, the shopping's great! 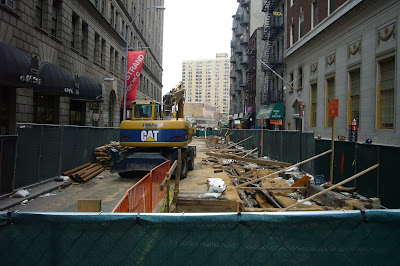 As Urbanite reported (via Jeremiah) on Monday, the Strand Annex on Fulton Street will close after the summer. Why?
The Annex, purveyor of discounted books both new and used, has been at its current location for 12 years. But store owner Fred Bass says that recent construction in the area has decreased customer traffic and lowered profits.
“We were doing very well with that store, and then they started the construction, which really hurt our sales,” Bass said. “The lease was up, and of course the landlord wanted the normal increase. But we figured the construction will last at least another year, and we just felt that it wasn’t viable to do that.”
Another year? Good luck. I made a joke in April about 2078. That seems realistic. I see this mess on Fulton Street every weekday. It's only getting worse. This is an area you want to avoid. And I know people who do, unfortunately. If something like the Strand is giving up, what about some of the other smaller shops?  They need the business.

Previously on EV Grieve:
Been on Fulton Street lately? What a treat!
All Fulton Street-related posts are here.
Posted by Grieve at 8:31 AM