"Hanging out on the Lower Worst Side" 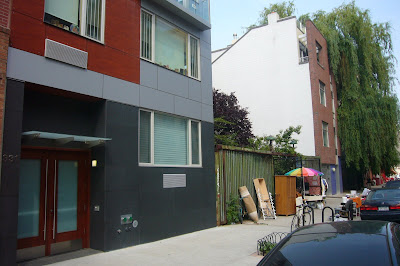 During my walk around the neighborhood Saturday, I came across a rummage sale in one of the community gardens on East 8th Street. (They seem to hold sales fairly often on weekends in the summer.) The garden is sandwiched between two buildings...million-dollar condos on the left, and a multimillion-dollar residence with a ground-floor apartment to help off-set the monthly bills.
By the way, 337 E. 8th Street, the address of the schmancy house, was the address of 8bc, the performance space/club/gallery that saw the likes of They Might Be Giants, Karen Finley and Steve Buscemi take the stage during its run from 1983-85. This was before my time here. So I always appreciate hearing stories about the place.
Meanwhile, here's a passage on 8bc by Cynthia Carr from the Times in 2006. The piece is titled Hanging out on the Lower Worst Side:
I remember walking down Avenue B with friends one night around 1983 when we ran into the two artists who had just opened 8BC, soon to become the East Village’s hottest club. They told us that if we wanted to perform (though none of us were performers), we were welcome. By then, I had also been invited to join a band, and I can’t sing or play.
The art world had cracked open, shaken by punk, which embraced ugliness and urban decay while putting a lot of old categories in question. What was music anymore when some of those No Wave records could clear a room? This was the era when everything could be tried, and there was space for the tryout.
This was the neighborhood I used to call the Lower Worst Side. 8BC occupied the basement of an old farmhouse. At least, that’s how people always described that building.
Meanwhile, in another piece from the Times on the Lower East Side music scene from 1988:
THE Lower East Side has often been treated as a neighborhood producing one sort of music, neatly categorizable and easily stuffed away with the dirty laundry. But when historians of the Lower East Side reconsider the facts, the 1980's will be thought of as an immensely diverse, fecund era for music. The composers and improvisers John Zorn, Elliott Sharp and Wayne Horvitz have broken out of their turf, gaining a larger audience as they reached artistic maturation. The intense and radical social criticism of rock groups like the Swans and Sonic Youth, and the once endless stream of legendary clubs (now curtailed by real-estate prices), from 57 Club and 8BC to the still-vital CBGB and the new Knitting Factory, will make the 80's sound like Eden.
Posted by Grieve at 7:30 AM

Email ThisBlogThis!Share to TwitterShare to FacebookShare to Pinterest
Labels: 8bc, Lower East Side, walking around

Ok I must chime in.

Here's an 8bc trip down memory lane from Slim, whose band was the first band to play there on opening night (Dairyland Jubilee). He would write it himself but he has trouble with computers and all things digital.

The stage was very high (approx 6 feet) and the floor was painted with sharks so when you looked down from the stage it looked like sharks circling you.

There was a giant crack going down the middle of the building (wonder if it is now just under the facade of the million dollar condos!)

They held a "military ball" and the front of the stage had barbed wire on it. Pete Missing, then in Drunk Driving, almost went into it during a fight but was pulled back just before going over.

I appreciate the anecdote on 8bc, thanks Jill and Slim.