Post scribe thinks turmoil in Africa is so trendy in the news right now!

Page Six Magazine, which is FREE every Sunday in the New York Post -- you just have to pay $1 for the paper! -- has several doozies today. First, there's a "trends" piece titled "The Sex Effect." You see, there's a recent release called Sex and the City that seems to be very popular. More than that, "anything Carrie Bradshaw touches turns to gold." Indeed! For instance, the $885 Hangisi shoe that Big used to propose to Carrie has sold out from New York stores! (Sixty pairs were sold the day the film opened on May 30; there is now a 400-name waiting list for them!) Also, the New York Public Library, where Carrie planned her dream wedding, is apparently the new Perry Street townhouse. According to the article, "throngs of tourists have made a pilgramage to the steps where Carrie was" [EV Grieve edited out the last word so not to ruin the movie for anyone who may actually want to see it, but you really shouldn't].

Then there's the column called "The Socializer" by "woman-about-town" Kelly Killoren Bensimon. She wants to be a real-life Angelina Jolie (or something) and see Africa. You just have to read her column for yourself. (Click on the image for a better view.) Content from the magazine is not online. 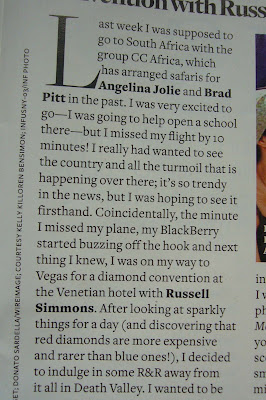 Email ThisBlogThis!Share to TwitterShare to FacebookShare to Pinterest
Labels: Page Six Magazine, Sex and the City

my dear mr. grieve, no WAY is that article about trendy african turmoil and sparkly diamonds NOT a satire. please tell me--is it really real? damn, now i may have to venture outside my apt to buy the paper.

Too real, my friend.

The FREE Page Six Magazine is totally worth your $1 for the Post today. I'm not sure how this item got by any editor.

i ran right out and bought it. my question exactly, re: what editor approved this?

This really makes me angry.

Nobody with any brains misses their flight to South Africa by 10 minutes, nor do they pay thousands of dollars to CC Africa for a trip and just go to Vegas.

PLUS, as far as I can recall, Brad/Angelina had little to nothing to do with South Africa other than I think they went there on vacation. They have toured many parts of Africa, Angelina as ambassador, adopting kids etc, gave birth in Namibia, but aren't really involved deeply with South Africa, which is also one of the more stable (though still crime ridden) DEMOCRACIES in Southern Africa.

And, if there were turmoil, it certainly couldn't be seen by a tourist, and certainly not when you are on a safari in a $2000/night safari lodge looking at giraffes and elephants in what is basically a National Park.

How an editor could allow such ignorance that lumps all of Africa together as though it is one monolith and not dozens of autonomous countries, is just insulting to all of Africa, to the readers of this piece of crap, and to South Africa in particular who, while certainly a long long long way from perfect, are working really hard to keep their democracy intact.

In today's Times, there's a piece about the disappearance of copy editors (Full disclosure: I am one.) This would not have gotten by even five years ago. Sad. And massively annoying.

Even more annoying is the fact that I didn't put a period after the first sentence. No wonder I'm disappearing!

I also was supposed to go to Rhodesia, since I reckon that mismanagement, corruption, and the repressive political natures of the Mugabe regime, voter fraud and buying , are totally hip and cool (they have a longer line than Shake Shack just to vote, so it must be a really happening and trendy thing to do); and that Brangelina has not yet put their stamp at that country so figure I should put mine. However, I missed my flight by 10,000 days and coincidentally the country changed their name. Only if I hadn't missed my flight, it'd still be Rhodesia.

just think...
none of her friends, family
will ever point out to the writer how shallow and daft she sounds. the circle of pampered people with platforms continues on!

This article is very disturbing.
These yunnie kids are a bad group of people to have as our elite as we enter a period in which some fairly important issues (economic, environmental, social, etc.) are going to have to be addressed.
Heck, they've always been sociopaths, but they're not even bothering to hide it behind political correctness anymore. Like BaHa said, something this offensively stupid would not have made it into print even five years ago, but what was once called "journalism" has changed dramatically over the past few years. I'm sure the editor is as equally spoiled and infantile as the writer herself, and thus not even aware of the issues raised here.
This is a sad time in America.

I love the juxtaposition of visiting Africa with going to a diamond show. I'm not sure if KKB made the connection that Africa is in shambles because the west continues to exploit its natural resources and leaves dictators in power because they are more favorable to business than democracies.

I'm sure that's where this column was heading. NOT!